A team from the University of Leicester has been awarded a prize for their proposal to crack down on wildlife crime using a portable DNA sequencing device, the MinION - developed by Oxford Nanopore Technologies - to read the ‘barcode genes’ of animals affected by illegal trafficking.

The Leicester team will collaborate with organisations working in the field such as the Kenya Wildlife Service and Panthera.

The method, proposed by Dr Jon Wetton from the University of Leicester’s Department of Genetics, uses DNA barcode genes to identify animal species in real time. 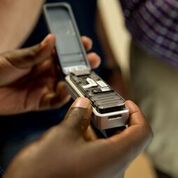 This could be used to test blood stains on the machete of a poacher, identify bushmeat from endangered animals such as chimpanzees at local markets - and even detect the frequent illegal substitution of products derived from protected species in the caviar trade.

The Wildlife Crime Tech Challenge, an initiative of the U.S. Agency for International Development with support from National Geographic, Smithsonian and TRAFFIC, sourced innovative science and technology solutions to combat this problem.

Three hundred creators from 52 countries applied, of which 16 – including the University of Leicester - have each been awarded $10,000 and an opportunity to bid for a larger award of up to $500,000 to help implement their solutions in the real wild world.

The award to the University of Leicester’s Dr Jon Wetton aims to combat the wildlife trafficking trade by initiating the development of a method of determining the species of origin of animal derivatives and forensic traces in the field using a portable device to read ‘barcode genes’ - DNA sequences which vary significantly between species.

To do this the University of Leicester will use the MinION, a portable USB-powered DNA sequencer developed by Oxford Nanopore Technologies.  The team will also explore the use of VolTRAX, a sample preparation device designed to allow non-scientists to prepare samples outside a laboratory environment.

Together these technologies are intended to fully automate DNA analysis from applying an original sample of blood or tissue to comparing the analysis results in real time with a reference database of species-specific barcode gene sequences.

Dr Wetton from the University of Leicester Department of Genetics said: “This project builds upon research carried out in 2003 when I led the Forensic Science Service team responsible for introducing species identification by DNA into UK casework.  Our method then was costly, as it required more than a day’s work in a well-equipped laboratory, but by using the MinION device we hope to achieve the same results about one hour from collecting a sample.”

A cheap and rapid test will allow law enforcement officers to carry out the testing in developing countries, or allow rapid testing of goods in transit at customs posts.

The device will also reduce the inconvenience to legitimate traders and raise awareness of the extent and diversity of illegal trade.

Dr Wetton added: “We hope to demonstrate proof of concept within a year, with a view to working on it further so that the method is more broadly useful in the field. This initial grant will help demonstrate how the test could be used to detect traces of elephant and rhino blood in poaching cases once the device is fully developed.”