Therapeutic antibodies have great potential for revolutionizing medicine, but finding the right antibody candidates that work well against a target and are amenable to large-scale manufacture can be a challenge. In this article, we explore recent developments in antibody screening that can quickly identify and prioritize antibodies for further development.

When screening for antibodies, researchers are looking for a range of attributes. Fundamentally, the antibody needs to bind to its intended target but, depending on its purpose, other characteristics are also necessary. For example, anti-viral antibodies need to not only bind but also neutralize their viral target, and often – as seen currently with the SARS-CoV-2 (COVID-19) pandemic, they need to be cross-reactive against many different viral variants. In the search for new therapeutic anti-cancer antibodies, it is essential to determine if the antibody has the desired agonistic or antagonist function when it binds to its receptor target.

“Lack of non-specific binding is also important,” explains Brandon DeKosky, assistant professor of pharmaceutical chemistry and chemical engineering at the University of Kansas, who recently developed a new method to screen millions of naturally occurring human antibodies. “You don’t want an antibody that binds non-specifically to human cells or tissue. It can be a big drug development issue for antibodies with a lot of positive charges or hydrophobic regions that lead to undesired interactions.”

Carrying out the additional functional studies on antibodies to show that they do more than just bind to their target can take substantial time and resources. It is unsurprising then that new ways of identifying or screening for therapeutic antibodies are focusing on predicting – or even shaping – the properties of antibodies as early as possible in the discovery pipeline. 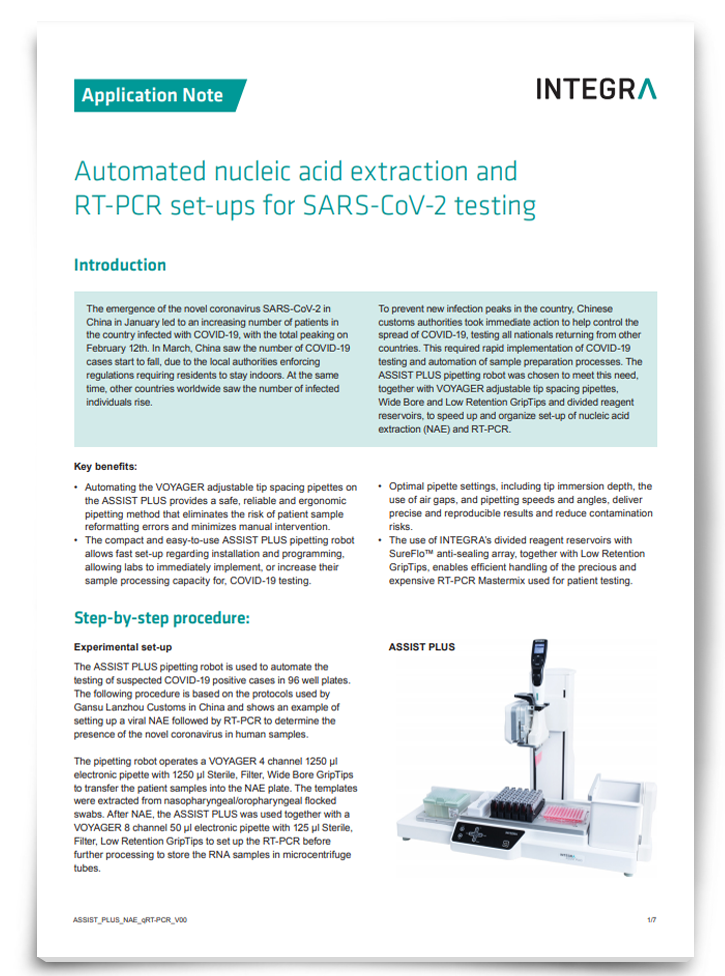 To prevent new COVID-19 infections in China once the number of cases fell, all nationals returning from other countries were tested. This process required rapid testing and automation of the sample preparation process. In order to meet these requirements, scientists have exploited automated pipetting solutions. Download this app note to discover a pipetting procedure for automated nucleic acid extraction and RT-PCR with tips on how to automate the COVID-19 testing process.

In DeKosky’s lab, in collaboration with researchers at the National Institutes of Health (NIH) Vaccine Research Center and UT-Austin, they have developed an antibody screen that is as fast as traditional methods but better reflects natural human immunity.1

“Each B cell has its own unique antibody, made up of light and heavy chain proteins encoded by two separate genes that sit on different chromosomes,” explains DeKosky. “It is like having all of the even-numbered pages of a book in one part of the cell and the odd numbers in another part. To read the whole story, you need to connect the even and odd pages together.”

During his PhD in the lab of George Georgiou, DeKosky developed a way of linking the light and heavy chains together so they could be sequenced, and now they have built this into a screening method. The linked naturally occurring antibody polypeptides are cloned into yeast display vectors and then used as a library to screen against antigens. Previous efforts in antibody discovery either relied on single-cell cloning, which had high costs and was limited to only screening for a tiny fraction of all human antibodies. Other methods have linked non-natural pairings of antibody genes, but these have limitations, too.

“Non-natural gene pairing has been used in the past because it’s so much easier to do, but often the quality of antibodies discovered is not good enough for an effective drug, and the synthetic nature of those antibodies makes it hard to understand the human immune response,” says DeKosky. By contrast, the native pairing of antibodies for screening means antibodies can be identified as they occur naturally, helping to identify the most potent antibodies and revealing more about the human immune response. The team has used the technique to find potent antibodies against HIV, Ebola, and more recently, SARS-CoV-2. 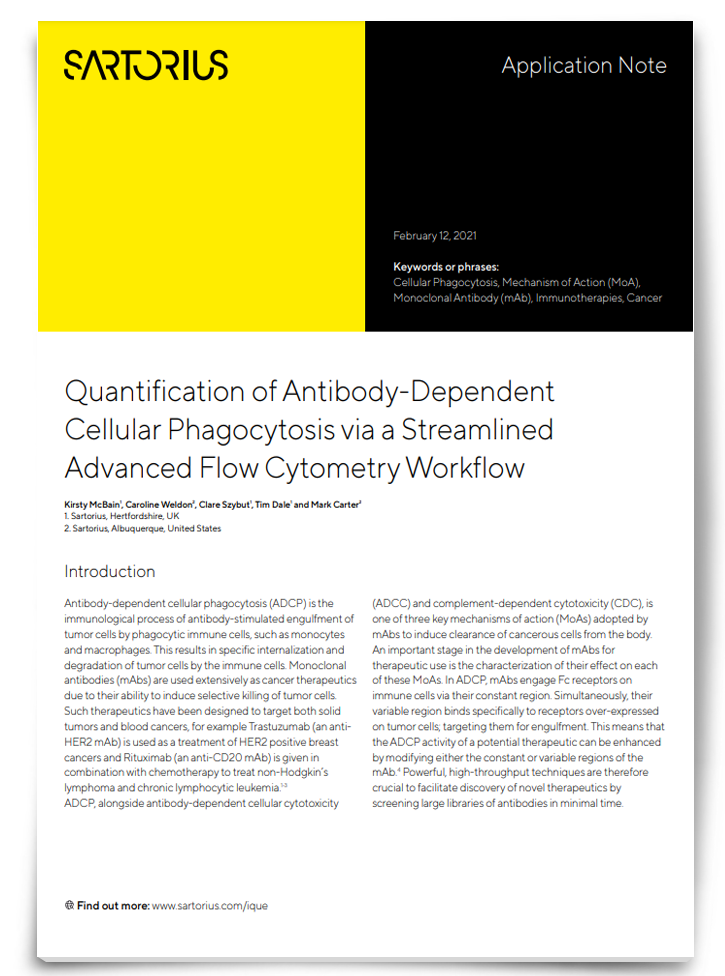 An important stage in the development of therapeutic mAbs is the characterization of their effect on antibody-dependent cellular phagocytosis (ADCP). However, this can be challenging as conventional techniques for measuring ADCP can have complex and time-consuming workflows, lengthy fixation protocols, quantification issues etc. Download this app note to discover a high-throughput, multiplex assay that can profile large libraries of mAbs for their effects on ADCP in minimal time and much more.

One of the goals in therapeutic antibody discovery is to find soluble antibodies that achieve a desired phenotype against a mammalian target in its natural form. In the Lerner lab at the Scripps Institute, they are developing new ways to study antibody binding and function in a more natural environment. One of their approaches is to use tiny microfluidic-generated vesicles to trap an antibody and its target molecule in close proximity. Each droplet becomes a mini ecosystem in which the bacteria make phages displaying a unique antibody, which can only interact with mammalian cells in the same droplet.2

Jia Xie, who works both at the Lerner lab and as associate professor at the University of Miami, explains this approach: “We wanted to maintain antibodies in their soluble format, and restrict the antibody’s diffusion and increase its local density, so then you can detect the binding and easily assay for the binding antibody from the vesicle. With the mini vesicle, you have an artificial microenvironment, and antibodies can be generated at higher speed and higher quality.”

Another issue is finding antibodies against more challenging targets such as receptors on the cell surface. This has proved particularly difficult for G-protein coupled receptors (GPCRs) and ion channels. Yet, these targets usually lead to highly effective drugs – and account for around 60% of current drug targets.

“GPCRs or ion channels are harder to generate antibodies against because they tend to have a relatively small extracellular domain, which means there is little antigen to use,” explains Xie. “You also can’t really remove a portion of the ectodomain because it disrupts the conformation and any resulting antibodies might not recognize the receptor in its natural form.”

To remedy this, the Lerner lab has developed a screen where a yeast antibody library and mammalian cells bearing the membrane receptor are labeled with fluorescence, and then mixed together. When an antibody binds to the receptor, it forms a yeast-cell complex that can be sorted using flow cytometry. Using this approach, they managed to perform multiple screens using different flow cytometry gating properties to identify antibodies with the highest affinity for a receptor. They also used the technique to identify antibodies with nanomolar binding affinities for the human mu opioid receptor – an important target belonging to the GPCR class.3 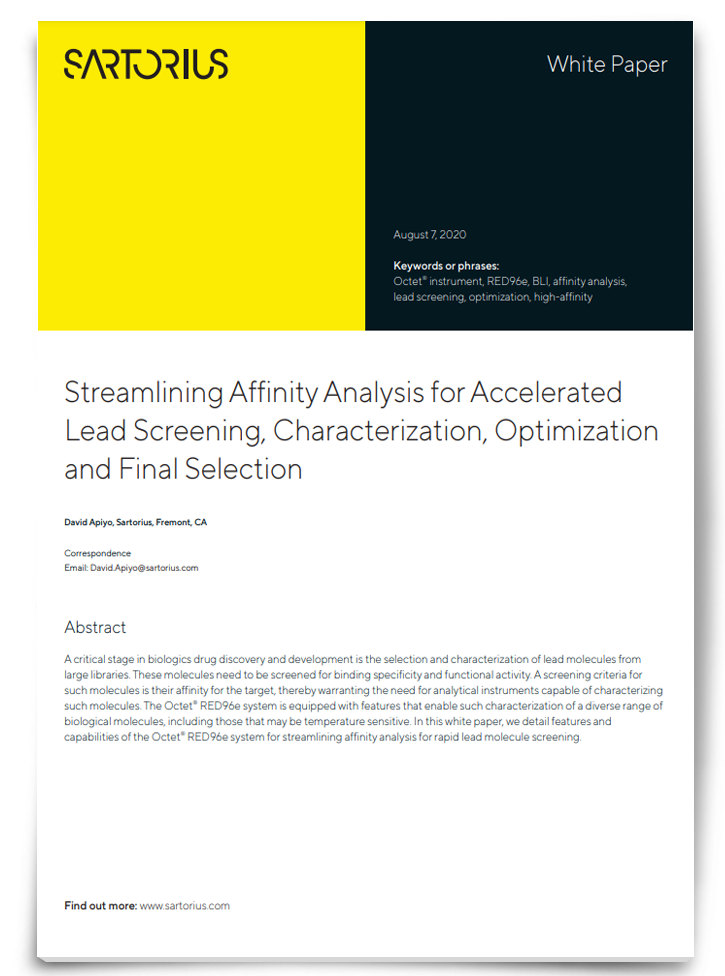 Determining a lead molecule’s binding kinetics and its affinity to a target is a critical step in the discovery and development of biologics. This process warrants the need for analytical instruments capable of characterizing such molecules. Download this whitepaper to discover an approach that accurately measures multiple high-affinity interactions over long run times, achieves rapid screening of large libraries and minimizes loss of precious samples.

Even once you find an antibody with the desired specificity and function, it then needs to be suitable and stable enough for large-scale commercial production. This is where being able to predict the properties of antibodies as early as possible is becoming important, says Professor David Brockwell of the Astbury Centre for Structural Biology at the University of Leeds, UK.

“One of the key differences between small molecules and large protein molecules is that the large protein molecules can unfold or misfold because they are inherently unstable. To assess which of these complex molecules can be manufactured at scale is very expensive because it is hard to predict which will be successful. We have been looking at tests we can apply to proteins early on in development to guarantee they have the right properties. Some people in different industries call it “quality by design”, but in the pharmaceutical context we call it “developability”.

Brockwell and collaborator Professor Sheena Radford have been working with Big Pharma on the developability of antibody therapeutics. Together, they have developed an assay that can screen for proteins that look likely to aggregate and those that are more resilient – a key challenge in the manufacture of therapeutic antibodies. The screen uses beta-lactamase as a “sensor” to detect aggregation.

“The whole idea is that if a protein is unstable, it unfolds and then it either aggregates or it gets degraded and in doing so, the two parts of the beta-lactamase protein falls apart and the bacteria won’t survive in the presence of ampicillin. Proteins that manage to keep beta-lactamase together and grow in the presence of ampicillin are likely to be more stable,” says Brockwell.

The technique was tested in a proof-of-concept experiment with an antibody whose development was halted because it aggregated.4 “The aggregation was due to a trio of amino acids causing an exposed hydrophobic patch,” notes Brockwell. When the residues were replaced, it completely resolved the issue, but it look a lot of time and resource to solve. “When we showed them the results for this protein in our assay, we were all amazed. It was really clear that you could differentiate between the sticky version of the protein, from the non-sticky alternative.”

An exciting aspect of this screen is the potential to carry out directed evolution of antibodies, explained Brockwell: “We showed that we could take their discontinued antibody and without spending a lot of time we could generate antibodies that were better than the re-designed replacement. We randomly mutated the original antibody fragments, and then selected only those bacteria that can grow on high concentrations of ampicillin to find those least likely to aggregate. When we cloned the fragments into a full IgG antibody, we showed they still had really good physical properties and they still bind their target antigen.”

The next stage is to generate much more data on understanding why certain antibodies are prone to aggregation. “For that, we are using libraries of antibodies with mutations in every variant, and then following their growth in ampicillin over time. By carrying out next-generation sequencing on the antibody clones at time zero, and then at a later stage, you can plug the large sequence datasets into a computer and use artificial intelligence to really start to understand the rules of protein aggregation – what is it about this sequence that allows this behavior? To be able to do that would be truly transformative.”

Complete the form below to unlock access to this Audio Article: "Advances in Antibody Screening"

Joanna Owens, PhD
More from this author >
Advertisement
Chosen for You
Webinar