Translation is often referred to as the "last step" of the "central dogma" of biology, whereby DNA is converted to RNA and then to protein. However, there are additional steps involved after protein synthesis that are necessary for a cell, tissue and organism to achieve its functional biology and diversity. Post-translational modifications are changes that are made to proteins after synthesis, typically mediated by enzymes.

Why are post-translational modifications important?

The sequencing of the first human genome in 2003 marked a major milestone in molecular biology. In the years since, it has become apparent that the human proteome – the collection of proteins that are or can be expressed in a human at a certain time – is categorically more complex. END_OF_DOCUMENT_TOKEN_TO_BE_REPLACED

Why? The human proteome is extremely diverse. Whilst the genome is essentially constant across different cell populations in the human body (bar a few exceptions), in order for individual cells to perform their individual functions, and respond to environmental stimuli, a variety of different proteins must be expressed at different timepoints across cells, tissues and organs. It is estimated that there are ~20-25,000 protein-encoding genes, whilst the proteome is estimated to be over 1,000,000 proteins in size. The diversity of the proteome is achieved by several different mechanisms; post-translational modifications are one example. 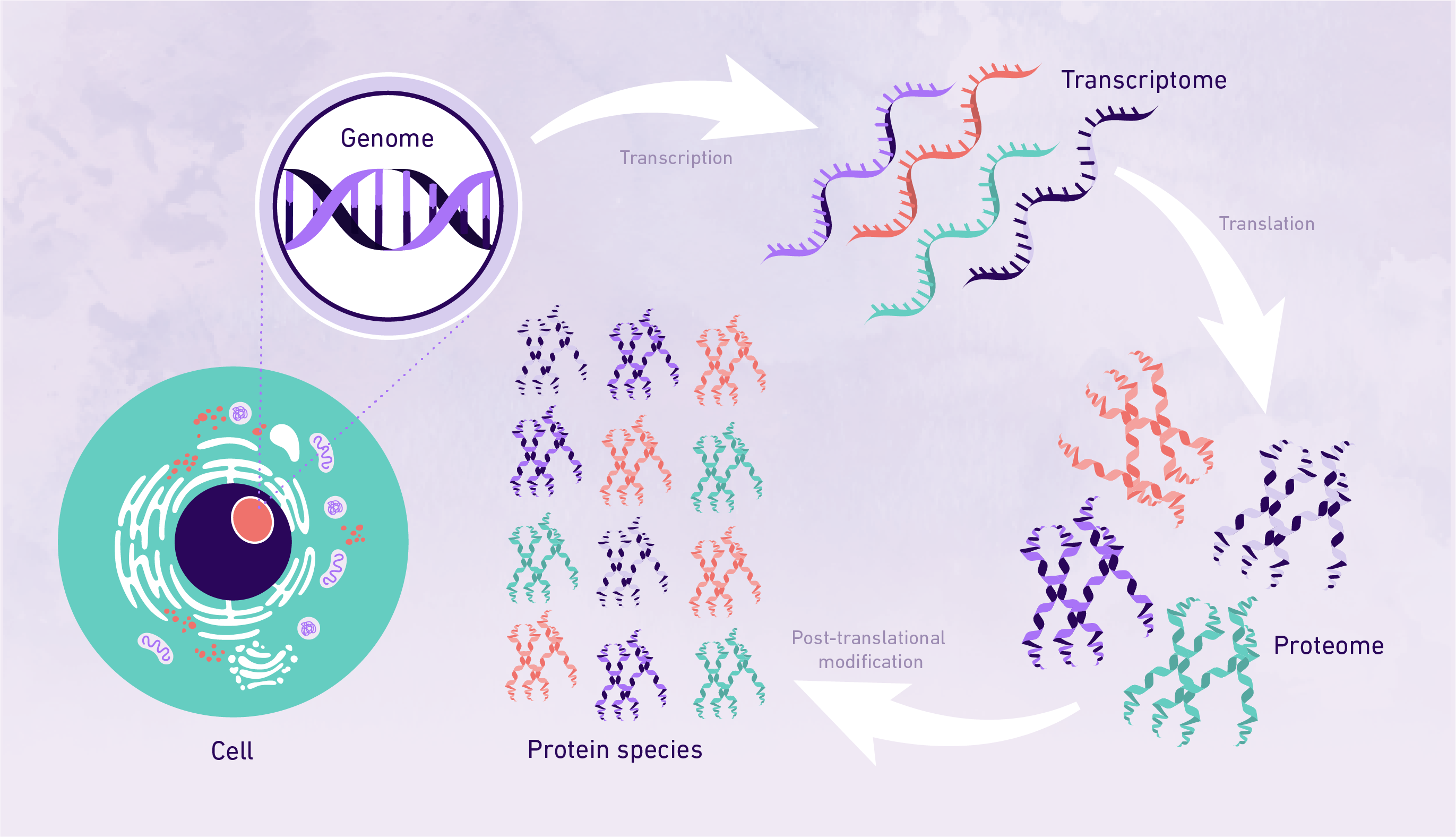 The process by which DNA is converted to proteins, and how post-translational modifications add to the complexity of the proteome.

Protein phosphorylation is the one of the most commonly occurring and most-studied post-translational modifications. It entails the phosphorylation of a specific amino acid residue through the addition of a phosphate group to a polar group R via a kinase, most commonly occurring at serine, tyrosine or threonine residues. The addition of the phosphate group results in a modification of the protein, whereby it transitions from being hydrophobic apolar to hydrophilic polar, enabling its interaction with other molecules – essentially "activating" it. A reversible post-translational modification, protein phosphorylation is important for cell regulation and the activation and deactivation of enzymes and receptors, which can be implicated in disease processes such as cancer.2 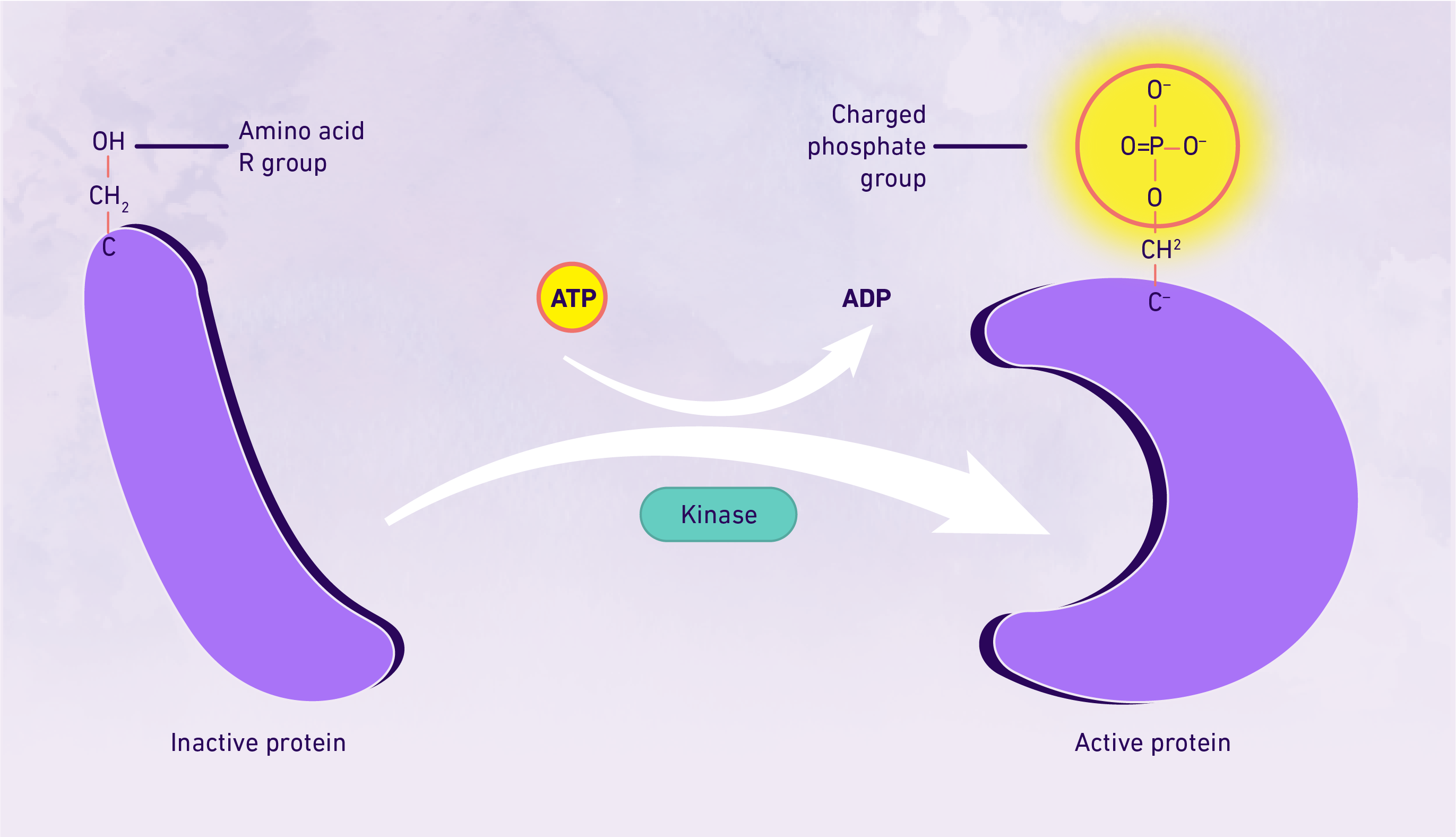 Protein glycosylation is recognized as one of the most “complicated" yet most commonly occurring post-translational modifications.3 It involves the covalent addition of a carbohydrate moiety to an amino acid, forming a glycoprotein. Glycosylation reactions are diverse and catalyzed by various different enzymes, which attach specific glycans to specific amino acids. Glycoproteins are estimated to make up ~50% of the proteome; however, the study of the glycoproteome is challenging because of the large number and diversity of glycoprotein isoforms.4 Glycosylation of eukaryotic proteins is usually categorized into two major types; N-linked, whereby a sugar molecule is attached to the amide nitrogen of asparagine, and O-linked, where a sugar molecule is attached to the oxygen atom of serine or threonine.

There are an array of applications from glycoproteome research; many glycoproteins serve structural functions, whereas immunoglobulins are central to immunity and surface-presenting glycoproteins and glycolipids determine human blood group type.3 Thanks to advances in analytical technologies, such as mass spectrometry (MS), our knowledge of the human glycoproteome and the significance of glycosylation continues to grow.

Ubiquitin is a small protein – approximately 8kDa in size – that can bind to a substrate protein in a process known as ubiquitination, a type of post-translation modification that serves to regulate a protein's function or mark it for degradation. Ubiquitination occurs in three sequential steps that are catalyzed by three groups of enzymes. 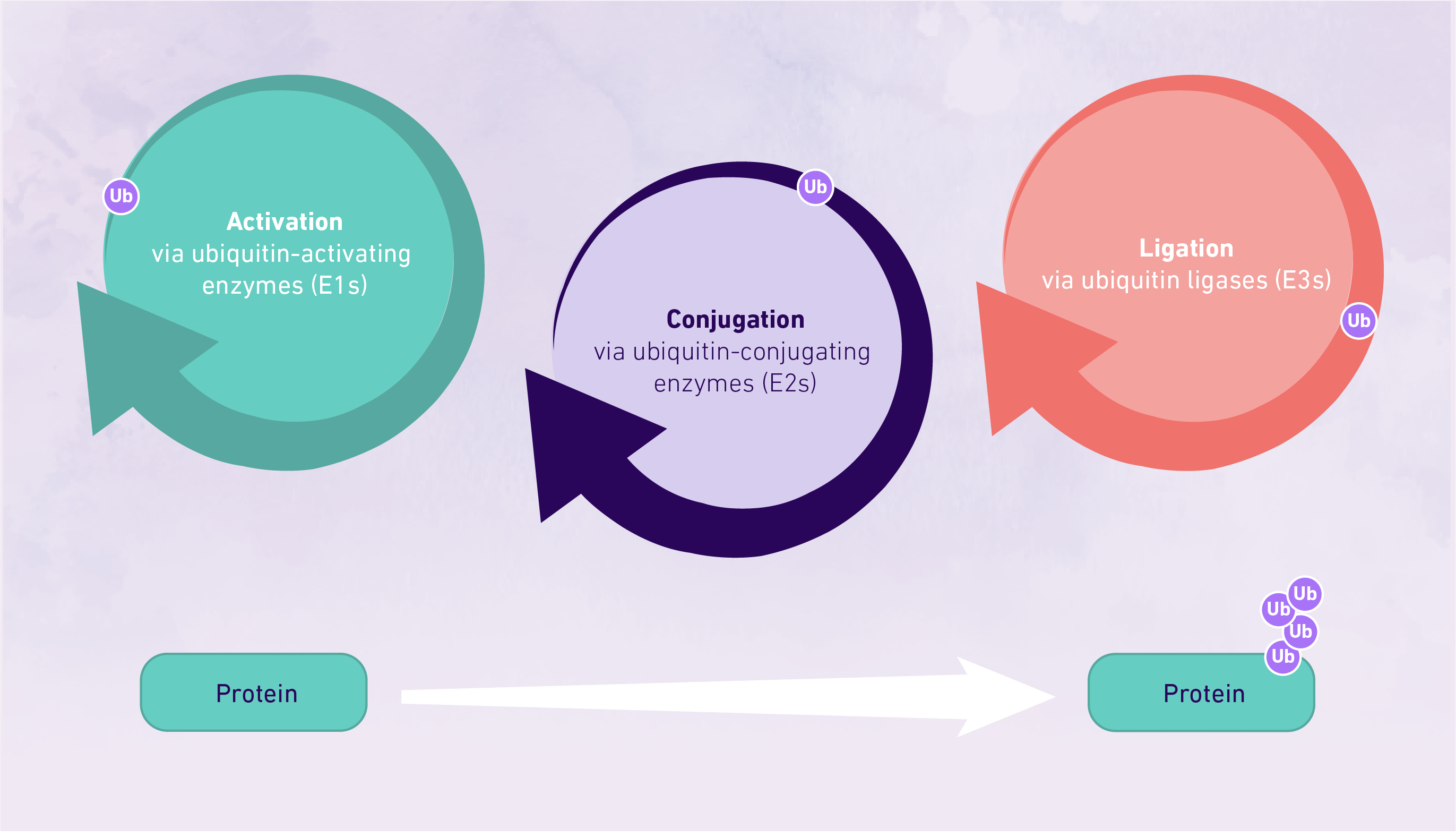 Ubiquitination serves several functions, the most common being to flag proteins for degradation by the proteasome, but there are others including: immune and inflammatory response, organelle biogenesis and signaling roles in DNA repair.6

Protein methylation has a regulatory role in many essential cellular processes, including gene transcription and signal transduction.7 In protein methylation, enzymes known as methyltransferases add a methyl group (most commonly donated by S-adenosyl-l-methionine, or SAM) to specific amino acids on a protein molecule, such as the lysine and arginine residues. Protein methylation can have effects on:

As such, it is often studied in the context of cancer where the regulation of cellular processes and cell cycle regulation can go awry.8 The characterization of individual protein methylation processes is a growing area of research and is gradually becoming easier to study thanks to advances in MS; however, the complexity of the methylome makes it challenging to profile as a collective using the currently available tools.9

Protein acetylation is a common post-translational modification in eukaryotes and involves the addition of an acetyl group to nitrogen via reversible and irreversible processes.

Acetylation has been studied largely in histones, the proteins that pack DNA into chromosomes, where the acetylation of the lysine side chain (ε-NH2) on the N-termus of histones is associated with the regulation of gene expression. If lysine is acetylated, it is no longer positively charged. In turn, the binding of DNA to the histone is relaxed, which facilitates the transcription of genes. Whilst histone research has dominated the field, scientists now suspect that there are a wide range of protein acetylations which could carry vital physiological functions across different biological processes, particularly in bacteria.10,11 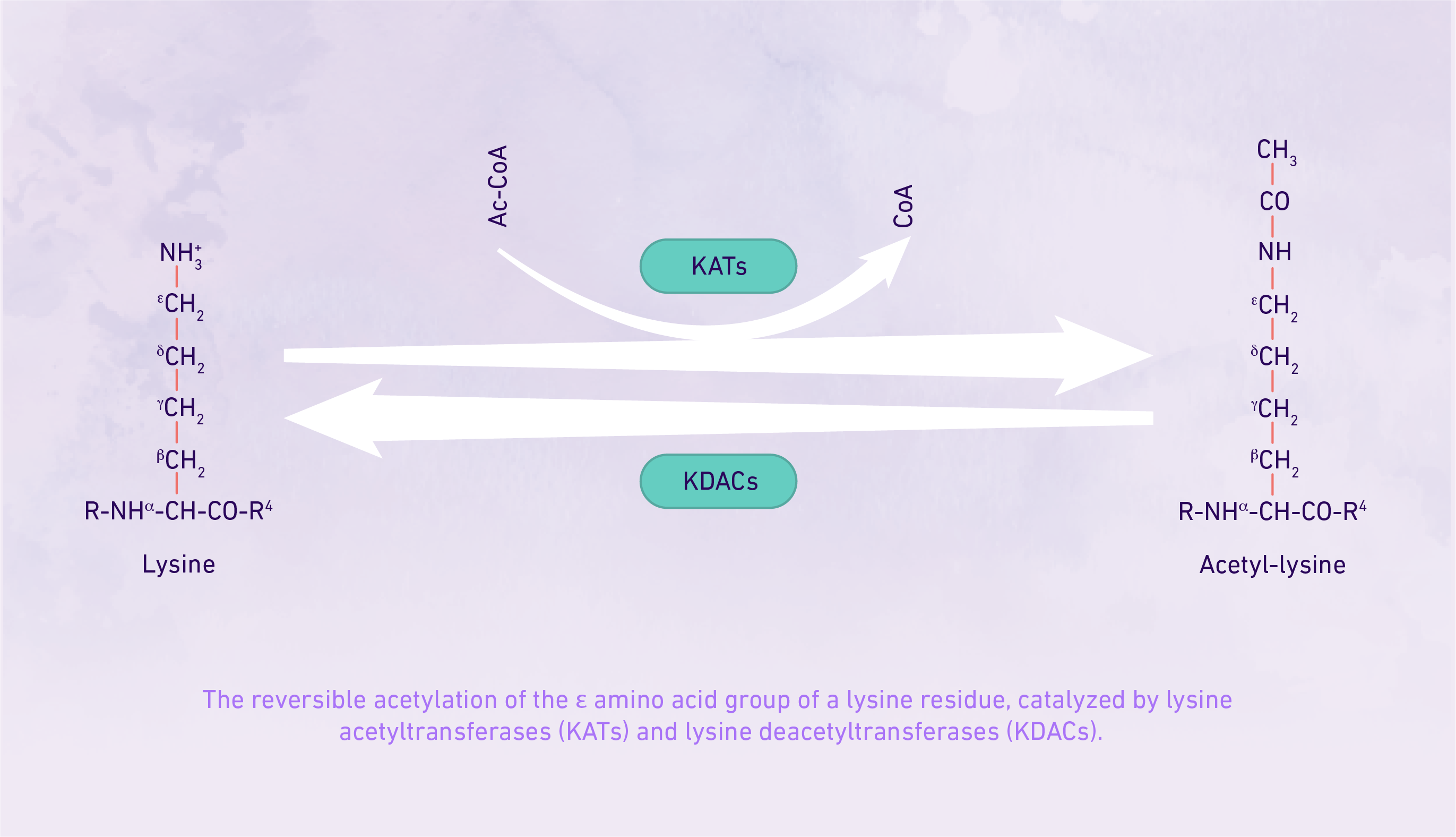 An image detailing the  acetylation of a lysine side chain.

Post-translational modifications are key to the diversity of the proteome, and in turn, the diversity of an organism. Whilst MS-based proteomics has facilitated novel insights on the role post-translational modifications play in biological processes, we still have a way to go yet. In the future, characterizing and mapping the modified proteome with high sensitivity and specificity will undoubtedly unlock major advances in scientific disciplines such as diagnostics and drug development in our pursuit towards personalized medicine.12

The unprecedented scale of global scientific collaboration, including the establishment of expert consortia, has played an important part in addressing the COVID-19 pandemic. We spoke to Professor Danny Altmann, chair of the Global T cell Expert Consortium (GTEC) about the role that T cells have in viral infections like SARS-CoV-2 and what GTEC is hoping to achieve.

END_OF_DOCUMENT_TOKEN_TO_BE_REPLACED

Explore the Complexity of The Nervous System