Mass spectrometry (MS) is a powerful and versatile analytical tool used in the biopharmaceutical industry, and in many other applications including food allergen detection and forensic science.1,2 It has been described as “the smallest scale in the world” – not because of the size of the instrument, but because of the size of its analytes. In the early 20th century, MS was used to measure the mass of atoms and demonstrate the existence of isotopes. Now, MS is used to study a broad range of molecules including small hydrocarbons, proteins, peptides, carbohydrates and DNA.3

The output of a mass spectrometer is the mass-to-charge (m/z) ratio, which is viewed in a “mass spectrum”, i.e., a graph of the m/z ratio plotted against the relative intensity of each detected signal (Figure 1). By incorporating knowledge from mass spectral libraries, the identities and abundance of a wide range of compounds can be deduced.

What is the m/z value and why is it important for biotherapeutic development?

MS works by putting a charge on the analyte, and measuring how the trajectories of the resulting ions respond to vacuum in various combinations of electric and magnetic fields.3 Key components of a mass spectrometer include an ion source (which enables the analytes to become charged), a mass analyzer (which measures the m/z ratio of ions) and a detector (used to count the number of ions with a specific m/z value). The m/z ratio is used to determine the molecular weight or mass of a molecule, and subsequently, its identity. 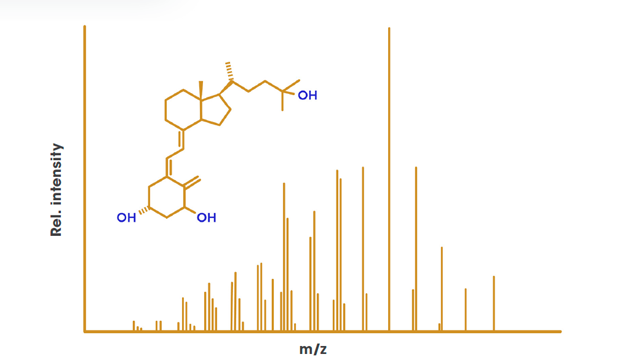 The accurate identification of compounds is a fundamental aspect of biopharmaceutical development, which is why MS has come to play such a strong role in the industry. Biopharmaceutical products are highly complex and can undergo subtle modifications that affect their function – and subsequently, efficacy and safety. For example, protein phosphorylation is one example of many post-translational modifications that can affect protein function. Identifying these variants with high sensitivity and specificity is an important part of bioprocessing, explains Chris Sutton, head of the proteomics facility at the University of Bradford. “The potential for using MS in the development of biopharmaceuticals lies with the ability to sequence and characterize large intact proteins, such as antibodies, using the latest generation instruments. The ability to obtain accurate mass and identity of isoforms such as glycosylation variants or incomplete products using these instruments could play an important role in ensuring the quality of very expensive products manufactured by bioprocessing methods dependent on complex cellular expression systems.” 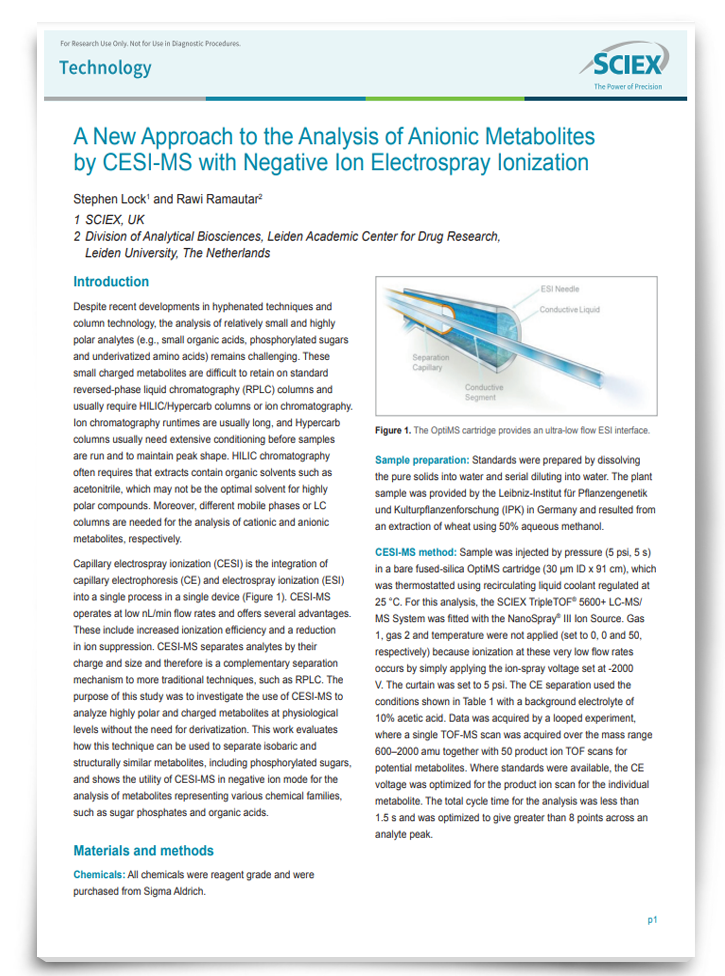 Elucidating the metabolic or signaling pathways for new disease indications often requires sampling from only a few cells. New types of protein therapeutics, oligonucleotide therapies, viral gene therapies and cell therapies keep expanding in their level of complexity and level of required characterization. In short, more types of biomolecules in smaller amounts must be analyzed in greater detail. Download this info kit to discover solutions that can analyze compounds with positive or negative polarity and provide easy-to-use kits for a variety of protein workflows.

Looking beyond composition with glycoanalytics

Understanding post-translational modifications is not only important for bioprocess control; understanding how different structures affect function can help guide biotherapeutic development at earlier stages. Monoclonal antibodies and other glycoproteins, which make up a significant proportion of the biotherapeutics market, consist of populations of glycoforms; i.e., forms that have the same protein sequence, but have different sugars at each glycosylation site. Professor Pauline Rudd, emeritus fellow at University College, Dublin and visiting investigator at the Bioprocessing Technology Institute, A*STAR, Singapore, is acutely aware of how glycoanalysis is important to the industry and is focused on improving the process with automated technologies. Glycoforms can have altered pharmocokinetics, says Rudd: “Take erythryopoetin, for example. If these large sugars are not capped with sialic acid, the circulatory half-life is reduced from three hours to three minutes. From a fundamental point of view, it’s really important to know which sugars are where. On the spike protein of the SARS-CoV-2 virus, for example, the sugars are going to protect areas of that spike from a vaccine.”

Glycan arrangement also aids protein-folding and stability, protects the protein, refines its mode of action and can also affect the immune response.4,5,6 Insights gained from MS-driven glycoanalysis are enabling promising new biotherapeutics and approaches to be explored. For instance, Pagan and colleagues converted endogenous antibodies to anti-inflammatory mediators in vivo by engineering biomolecules capable of attaching galactose and sialic acid to specific antibodies. Following administration of the glycan-modifying enzymes, autoimmune inflammation was attenuated in vivo.5

MS is the backbone of glycan analysis, and there are two general MS-based strategies that can be employed: “top-down” and “bottom-up”. “Top-down” analysis implies that intact glycoproteins are directly applied to MS without extensive separation or digestion.“ Bottom-up” involves some form of glycan release using chemical or enzymatic methods, after which glycan and protein sequences are obtained.7 Ideally, glycoprotein analysis would incorporate a combination of separation technologies to increase confidence in assignments, says Rudd. “Many tools are available to determine features of glycosylation. For glycomics, where you analyze the released glycans, you could use matrix-assisted laser desorption/ionization coupled time-of-flight (MALDI-ToF) MS, hydrophilic interaction chromatography with ultra-performance liquid chromatography (HILIC-UPLC-MS), tandem MS and exoglycosidases. A combination of these techniques will give you a detailed analysis of your glycan pool. This differs from intact glycoprotein analysis, or glycoproteomics which is used for site analysis.” 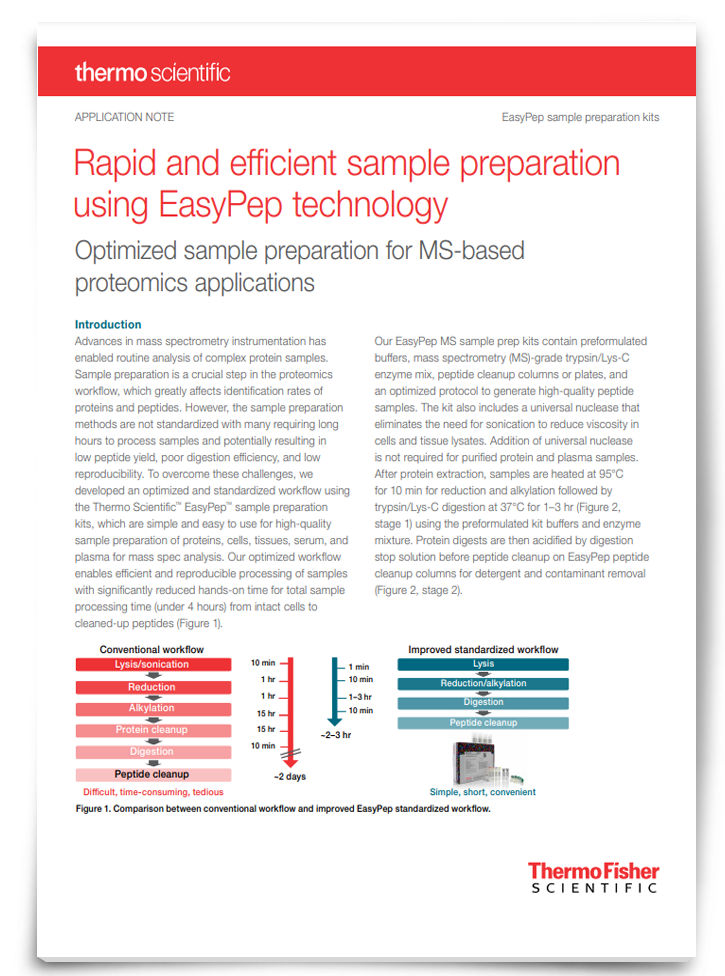 Sample preparation is a crucial step in the proteomics workflow, which greatly affects identification rates of proteins and peptides. However, the sample preparation methods are not standardized with many requiring long hours to process samples and potentially resulting in low peptide yield, poor digestion efficiency and low reproducibility. Download this app note to discover a workflow that enables rapid and efficient processing of different samples whilst significantly reducing hands-on time.

Comprehensive analytical data is needed to advance the development of biosimilars, i.e., generic versions of biologics that can be registered after patent expiry of the original medicine. For biosimilars to be approved, manufacturers must demonstrate that there are only very small differences between the biosimilar and reference biotherapeutic, and that these differences are not of clinical relevance.8 MS methods, in combination with high-resolution separation methods such as liquid chromatography and capillary electrophoresis, are the foundation of biosimilar development. Preclinical and clinical studies are only engaged when a biosimilar antibody is shown to be "highly similar".8 If biosimilars are deemed not to be highly similar, they must undergo greater preclinical and clinical evaluation, while biosimilars with profiles within the range of original biologics may reach the market more quickly.8

Sensitive tests are needed to detect small product-related differences that may arise from the use of different host cell and expression systems, changes in the production, or from varying purification or storage protocols.9 According to Beck and colleagues , native MS, ion mobility coupled to MS (IM-MS) and hydrogen/deuterium exchange followed by MS (HDX-MS) are expected to play an increasing role in biosimilar and originator comparability studies.8 Different approaches enable different types of structural characterization: native MS and IM-MS provide structural insights at the top level, while HDX-MS can be used to study structural changes in monoclonal antibodies as well as aggregates.8

Characterizing biotherapeutics is a key challenge for the industry. However, much of the progress made to date would not have been possible without MS. The technique continues to evolve, and supports research and development from concept to bioprocessing, through to the analysis of biosimilars. The power of MS lies in its ability to detect subtle differences between compounds – and resolving power is what the industry needs.

Complete the form below to unlock access to this Audio Article: "Mass Spectrometry Brings Resolving Power to Biopharma"

Michele Trott, PhD
More from this author >
Advertisement
Chosen for You
Industry Insight