Before the safety and efficacy of a new vaccine can be evaluated in a Phase I clinical trial with human subjects, it must first undergo non-clinical safety evaluation in animal models. Regulatory Agencies such as EMA, FDA, PMDA, MHRA, Health Canada and many others require that the safety studies performed prior to Phase 1 must be conducted under Good Laboratory Practice (GLP) standards.1 Additional nonclinical safety studies are required during the clinical development process and are normally submitted as part of the registration dossier for the vaccine. In addition, specific additional nonclinical safety studies are needed for adjuvants and immunostimulants.

The principal regulatory guidance for nonclinical studies, including toxicology, is listed below in Table 1.

The first regulatory agency guidance specific to vaccine non-clinical safety studies was issued by EMEA (precursor to EMA) in 1995, illustrating that vaccine nonclinical safety evaluation is relatively new field, compared with the non-clinical toxicology studies for other categories of pharmaceutical products or chemicals. The scope of these guidance documents includes preventive and therapeutic vaccines and adjuvants. A wide range of vaccine types are covered, such as polysaccharide vaccines, recombinant protein vaccines, live or inactivated viral vaccines, protein (toxoid) vaccines and DNA/RNA vaccines.

Since many modern vaccines are adjuvanted, the most relevant and widely applicable guidance listed in Table 1 is WHO´s 2013 Guidelines on the Nonclinical Evaluation of Vaccine Adjuvants and Adjuvanted Vaccines. This publication is intended to facilitate consistent and harmonized international regulatory expectations for adjuvants and adjuvanted vaccines to national regulatory authorities (NRA) as well as vaccine manufacturers. In addition to nonclinical safety assessment, the areas covered also include manufacturing and quality, preclinical immunology, first time in human clinical trials and classification of adjuvants. The WHO guidance makes a distinction between “novel” and “new” adjuvants.

What is a novel adjuvant?

A novel adjuvant is one that has not been included in a licensed vaccine.

What is a new adjuvant?

A new adjuvanted vaccine includes unlicensed adjuvanted vaccines along with previously licensed products with significant changes in the antigen and/or adjuvant production process, major formulation changes (such as a change in adjuvant or addition or removal of one of the components) or a new route of administration.

Vaccines are a complex, diverse class of biological products, in which the vaccine formulation is not the final triggering component and elements of the immune system are the effectors. Consequently, vaccine nonclinical safety studies must be designed to assess the inherent toxicity of the vaccine, toxicity of impurities, contaminants and/or excipients, toxicity due to interaction of formulation components as well as toxicity linked to the immune response.

Considerations for animal models used in vaccine toxicity studies include:

Although the WHO 2013 guidance indicates that toxicity studies in a single species relevant for the vaccine is sufficient, some NRAs may require toxicity studies in more than one species. The most widely used species for vaccine GLP toxicity investigations are rats, rabbits, mice and non-human primates. The pros and cons of each are summarized below in Table 2.

Table 2. The pros and cons of rat, rabbit, monkey and mouse models for toxicity studies. 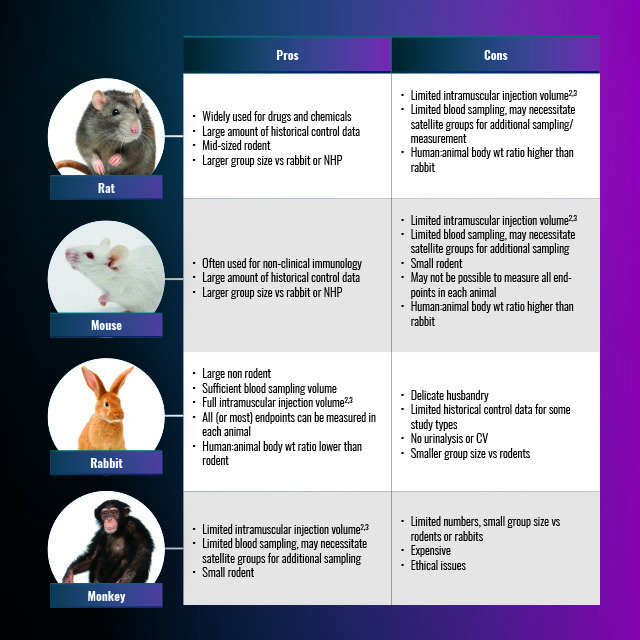 The principal types of toxicity studies required for adjuvanted vaccines and adjuvants/ immunostimulants during vaccine clinical development are summarized below:

For GLP toxicity studies, regulatory guidance requires that the item should be the final formulation of the vaccine to be used in the clinical trial, or a lot equivalent to the GMP clinical lot. The characterization of the lot to be used in GLP studies includes the identity, concentration, purity (residual cellular DNA, RNA and protein), potency, stability, sterility and adventitious agent testing.

The WHO guideline indicates that local tolerance can be combined with a single dose or repeated dose toxicity study. The rabbit is often used, since it can be injected intramuscularly with the full human dose in a single site.2,3 The dose to be used is the full human dose (rabbit) or a fraction of the full human dose (rodent). Toxicity parameters measured include mortality, clinical signs and body weight gain. Local reactogenicity is scored according to for erythema and oedema 0, 3, 24, 48, and 72h post-injection.4 Post-mortem analyses include gross necropsy including the injection site, gross observations of major organs and histological assessment of injection site.

The purpose of this study is to identify and characterize the potential toxic effects of repeated administration of a vaccine formulation intended for human clinical trial and eventual registration.

Parameters to be considered when planning this study include the animal species/strain, the clinical plan, dosage form, dose, and route of exposure, frequency of human exposure, the device for administration and any previous data available for the same (or similar) formulation. The study is performed via the intended route of clinical administration. The dosing schedule is similar to the human schedule in terms of the number of injections administered, but not the interval between the doses. In order to maximize vaccine exposure, one additional injection is given compared with the human schedule. Therefore, a vaccine with a human clinical schedule of two doses would normally be supported by a three-dose toxicity study. Animals in this study are divided into two necropsy time points following the last injection, early (three days post last dose) and late (four to 13 weeks post last dose), the latter intended to assess the reversibility of findings and/or delayed effects.

Measurements taken during the study include:

A reproductive/developmental toxicity study is required pre-licensure if the vaccine is intended for administration to women of child-bearing potential. This study is normally conducted prior to, or concurrently with, Phase III, and included in the licensing application. The most detailed guidance for this study type is provided in the FDA 2006 guidance.5 The recommended design is a combined developmental, peri- and post-natal study and the species most often used are the rat or rabbit. An example of a typical rat study design is shown in Figure 1 and described in Barrow, and Segal et al.6,7 Immunogenicity assessments in dams, pups and foetuses are required to confirm vaccine exposure. Each test group is subdivided into a caesarean and littering phase, the former for assessment of foetal development and the latter for assessment of potential postnatal effects up to weaning. 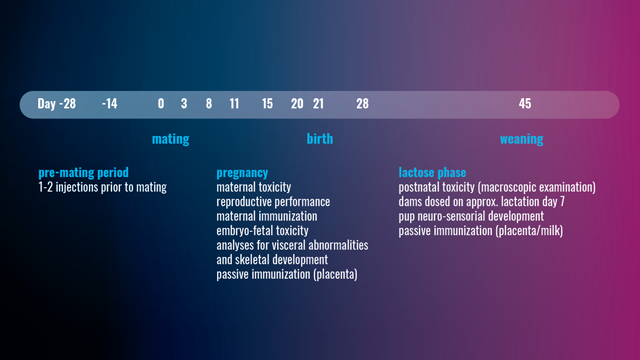 However, the WHO 2005 Guidelines provides no specific exemption for male fertility studies, and states that the need to conduct fertility assessments should be considered on a case-by-case basis. The need for the assessment of potential vaccine effects on male fertility is based on the frequency of administration, number and the age of male subjects to be exposed in Phase III and during eventual commercialization, and whether the antigen is expressed in male reproductive tissues.

Vaccine adjuvants are considered a new additive to be administered to humans, with testing adapted to the vaccine environment. In this context an immunostimulant is defined as an individual substance used in conjunction with a vaccine antigen to enhance the immune response to the antigen, while an adjuvant system (AS) is a combination of immunostimulants. Toxicity testing of adjuvants is intended to discriminate potential effects seen in final vaccine and to establish a safety package for the AS and/or immunostimulants to be used in various human vaccines. The following studies should be performed with the immunostimulant alone:

As can be seen from Table 1, the nonclinical safety evaluation of vaccines is an evolving area, and vaccines face an increasing number of regulatory guidelines. The 2013 WHO Guideline provides consistent and harmonized international regulatory expectations for adjuvants and adjuvanted vaccines. Nonetheless, nonclinical testing required for adjuvants and adjuvanted vaccines needs to be examined on a case-by-case basis.

Complete the form below to unlock access to this Audio Article: "Toxicity Studies in Vaccine Clinical Development and Registration"