The Hunt for Therapeutic Antibodies

A brief history of antibodies: the “magic bullets”

The potential benefits of antibodies have long been recognized. In 1890, Emil von Behring (Germany) and Shibasabura Kitasato (Japan) showed that injections of serum from an animal with tetanus could confer immunity to the disease in other animals.1 Behring was awarded the Nobel Prize in 1901, following the realization of the potential implications of this concept for human health.

Behring also collaborated with Paul Ehrlich, who understood that antibodies in the blood had some level of specificity and imagined that they acted as “magic bullets” fired from a gun to hit specific targets, while leaving host tissue in peace.2

In 1975, Köhler & Milstein published a paper in Nature3 describing the development of tissue culture cell lines which secrete anti-sheep red blood cell antibodies. This work signified the beginning of the modern era of antibody research and discovery.

Hopefully, Behring, Ehrlich and the like would be proud of the legacy they have left. Antibodies have found their place as an integral part of three main areas of medicine:

Given the clinical success that these “magic bullets” have facilitated, the drug discovery field continues to search for new therapeutic candidates. 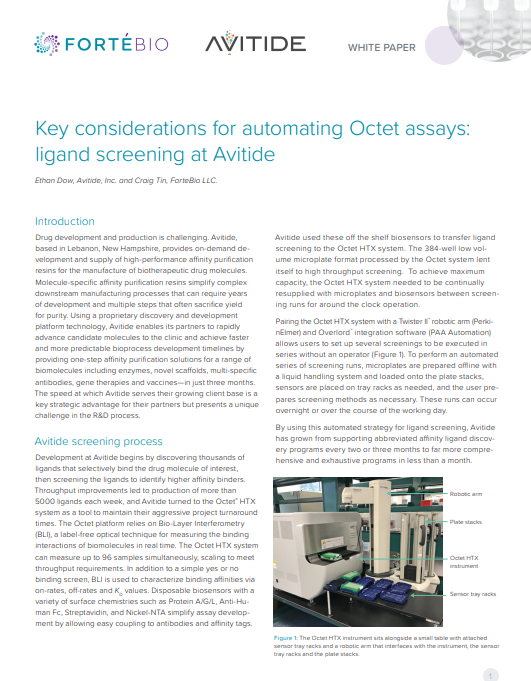 Download this whitepaper to discover the key considerations for automated Octet assays.

There is a whole host of techniques that can aid the process of identifying which antibodies would be suitable therapeutic candidates. However, deciding on a technique is never “black and white” – it depends on the question you’re asking. Furthermore, selecting new antibodies can be a very time- and labor-intensive process with uncertain chances of success. While the development and production of monoclonal antibodies is driven by biotech companies and pharmaceutical firms, the fundamental scientific basis for such development typically originates in academia, where the budgets don’t stretch so far.

One person helping to bridge the gap between academia and industry is David Matthews, associate director of Biotherapeutics at LifeArc. LifeArc is a charity that works with academic researchers to develop projects which show potential for translation from the bench to the clinic. As David is involved in antibody generation, humanization, affinity maturation and the biochemical characterization of candidates, he is very familiar with the complexity of the process.

According to David, some of the most widely techniques used in the field are:
The antibody microarray is another high throughput technique that holds great promise. Antibody microarrays can host thousands, or even tens of thousands, of features. The time from sample preparation to data interpretation can be less than 24 hours, and they can be used to study protein-protein interactions. However, it seems that the use of microarrays for antibody selection has not been widely adopted. David commented: “We might screen antibodies on array chips, but we haven’t had many. There are lots of different types, and there are a few different companies offering a range that are “better” or “cheaper.. the really good ones are fabulously expensive, the not so good ones can be really cheap, relatively speaking. It depends on the question you’re asking, and how important it is to get that array to reflect the question you’re asking.”

Antibody: A large Y-shaped protein produced by B cells, in response to exposure to a specific target (antigen).
Antigen: Antigens (antibody generator) generate an immune response, and bind to specific antibodies. Antigens can be toxic foreign substances or “self antigens” perceived to be foreign, which trigger autoimmunity.
Hybridoma: A hybridoma is the result of a fusion between myeloma cells and antibody-producing spleen cells from an animal (typically a mouse) which has been injected with a specific antigen. The resulting hybridoma cells can multiply indefinitely and produce specific antibodies.
Antibody humanization: To reduce the immunogenicity of mouse antibodies, genetic engineering is used to generate “chimeric” antibodies, which contain human constant domains and mouse variable domains – while retaining specificity.
Broadly neutralizing antibody: An antibody that neutralizes many different genetic variants of a virus.

Interdisciplinary collaboration is driving the next generation of antibody discovery platforms

The integration of other disciplines is a common trend generating progress in this area. Advances in genomics, bioinformatics, and microfluidic technology are beginning to make their mark. One example of this can be found in the laboratory of Arvind Patel, Professor of Viral Vaccinology at the University of Glasgow. Patel’s work is focussed on developing a vaccine for the hepatitis C virus (HCV), which is a major cause of liver disease, affecting an estimated 71 million people.

In a recent study published in Frontiers in Immunology, his research group has embraced a bioinformatics resource for HCV sequence data, to investigate the major epitopes targeted by broadly-neutralizing antibodies that have already been characterized:5
“Our 2018 paper describes bioinformatics analysis, based on documented studies, of conserved epitope residues of HCV glycoproteins that are targets of a wide panel of antibodies (isolated by several research groups) that are capable of neutralizing diverse strains of HCV (the so called broadly neutralizing antibodies). This analysis identified several antibodies which could represent a starting point for developing broadly neutralizing antibody-based vaccines.”

Now, Patel is working to develop vaccines capable of targeting broadly neutralizing epitopes of interest identified in the study. 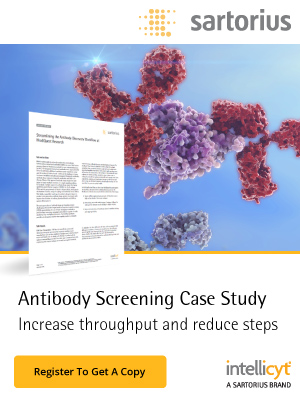 Therapeutic antibody discovery is a competitive landscape that requires high throughput tools enabling large screening campaigns and software capable of easily analyzing large multiplexed data sets. Current antibody screening tools such as ELISA, only report on binding to one target antigen at a time hence they are time consuming and require large amounts of target protein.

Exact mechanism of action can be determined after antibody identification

Interestingly, sometimes knowledge of the mechanism behind protection comes after the identification of a highly effective antibody. For example, a potent antibody combination was identified as being highly effective in the treatment of Chikungunya virus in mice.6 Chikungunya virus is a mosquito-transmitted disease that causes global epidemics of polyarthritis in humans. Michael Diamond, Professor in the Departments of Medicine, Molecular Microbiology, Pathology & Immunology at the Washington University School of Medicine was integral to this study, and described the process of identifying the antibody combination, CHK-152 and CHK-166:

“We immunized mice, identified mAbs that bound virus-infected cells, and then tested them for neutralizing activity in vitro and therapeutic activity in vivo. It was labor-intensive and took about a year.”

Only recently has the mechanism behind the antibody efficacy became clearer. Antibody engineering in conjunction with mouse strains lacking certain antibody-binding receptors revealed a central role of Fcγ receptors on monocytes in driving the therapeutic effects.7 According to Diamond, this has implications for the development of other vaccines, such as influenza, HIV, and Ebola.

“This will likely be important for many viruses that display their viral proteins on the surface of infected cells and can be targets of antibodies and their effector functions.”

The hunt for therapeutic antibodies isn’t a linear task

The process of hunting for therapeutic antibodies can look very different from lab to lab. As antibody candidates must contain many desirable characteristics, it takes a combination of techniques and platforms to assess them.

Regardless of the approaches selected, each are bound to benefit from common trends such as the integration of different disciplines, machine learning and increased automation of assay setups.

Complete the form below to unlock access to this Audio Article: "The Hunt for Therapeutic Antibodies"

Michele Trott, PhD
More from this author >
Advertisement
Chosen for You
eBook