A One-Stop Platform To Drive Progress in Gene Therapy Development

Progress in the gene therapy field is steadily gaining momentum, with a handful of gene therapy products now approved and many more in clinical trials. However, despite the attractions of using the technology to treat a range of diseases, several issues associated with the development and manufacture of gene therapies remain.

Technology Networks recently spoke with Dr. Sheng Ren to learn more about the growing interest in gene therapy and the key trends we can expect to see in the field in the next few years. In this interview, Dr. Ren also discusses some of the challenges that currently exist when developing gene therapies and explores how Cyagen’s one-stop gene therapy platform can help to address them.

Anna MacDonald (AM): How has the gene therapy sector developed over the last decade? What factors have been responsible for its growth?

Sheng Ren (SR): In the 1960s, scientists first speculated that DNA sequences could be introduced into patients' cells to cure genetic diseases. To this end, traditional gene therapy uses viruses to carry healthy genes into cells to compensate for defective or missing genes. In 1999, Jesse Gelsinger, 18, died after receiving gene therapy for a rare metabolic disorder, which brought great scrutiny to clinical applications of gene therapy and largely impacted research. In his case, it was found that the viral vector elicited a lethal immune response.

In the early 2010s, gene therapy experienced a renaissance as scientists developed better viral vectors to deliver gene therapy without eliciting an immune response. While traditional gene therapy has used viral vectors to deliver the desired gene into cells, other methods of delivering or correcting genes have exploded in recent years. In 2017, the first cell-based gene therapy was brought to the United States with the FDA approval of Kymriah (tisagenlecleucel) for certain patients with a form of acute lymphoblastic leukemia. Over the past decade, gene therapy has become a reality for many diseases, especially those caused by mutations in a single gene.

AM: What key trends can we expect to see in the gene therapy space in the next few years?

SR: With the recent explosion of clinical activity in the gene therapy field, researchers continue to uncover challenges that need to be overcome for developing applications. Four key trends that we think are worth watching:

AM: What are the key challenges that currently exist when developing gene therapies?

Regulators have expressed support for the growing field of gene therapy. The FDA continues to develop guidance documents to support the development and commercialization of these novel drugs. Given that these early applications of gene therapy involve the use of viruses and cells, therapeutic agents that were not previously evaluated by the FDA, updated guidance and regulatory documents will also be the focus of gene therapy development.

AM: Can you explain why adeno-associated virus (AAV) vectors are the most popular vector choice for gene therapies?

​​SR: AAV has several advantages that make it the most popular viral vector, such as:


AM: Can you tell us about Cyagen’s CRO platform and how it can help researchers overcome some of the challenges associated with gene therapy research?

SR: In the development of gene therapy drugs, the services involved in discovery and preclinical stages can be provided by Cyagen, which is impossible for many service providers. Our focus on rare diseases drives us to become a one-stop gene therapy CRO platform. Compared with traditional drug R&D CROs that provide a limited range of services, Cyagen can provide researchers with more convenient and efficient comprehensive service offerings that can effectively help control R&D costs, shorten the development cycle of new drugs and reduce R&D risks. 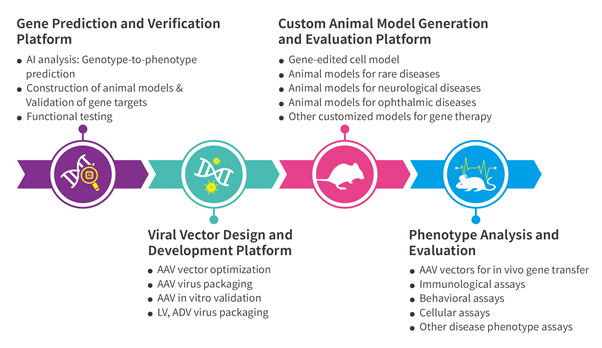 AM: What role do artificial intelligence (AI) and bioinformatics play in the platform, and what advantages does this bring?

SR:
Bioinformatics has been one of the key scientific disciplines in the fight against rare diseases. We have created a database of rare disease research data, for which, the combination of AI and bioinformatics provides key support in automatic splicing analysis of gene mutation sites.


Additionally, we have leading AI technology to support the optimization and transformation of AAV vectors. The training of AI technology based on deep learning has led to breakthroughs in the optimization and transformation of AAV vectors, including the ability to: quickly and accurately predict the sequence of AAV capsid protein, obtain the most expected new AAV serotype, and improve upon the effectiveness of AAV vectors and targeted tissue specificity in gene therapy applications. Cyagen’s synthetic biology platform can provide optimized AAV vectors for the development of gene therapy models alongside the necessary downstream validation testing for accelerated clinical translation.

Dr. Ren is deputy director of R&D and director of Gene Therapy at Cyagen, and a post-doctoral scientist at Cincinnati Children's Hospital Medical Center. 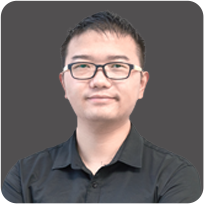