Sugar production from sugar beet accounts for 20 per cent of the world's supply. Erysiphe betae, a sugar beet powdery mildew can cause sugar yield losses of up to 20 per cent. Presently, to reduce the impact of E. betae, the main methods are fungicidal treatments and a range of partially resistant varieties. However, despite annual surveys for E. betae prevalence little is known about the disease’s diversity, its source of infection and strains that re-infect after fungicidal treatment.

JR: TGAC was recently awarded £100k towards identifying the sources of infection and reinfection of the sugar beet crop in the UK. What are some of the major diseases infecting sugar beet in the UK and how are they currently dealt with?

LP: Sugar beet is vulnerable to a number of pathogens that cause serious constraints on productivity and quality. Pathogens that are known to cause major problems with sugar beet production in the UK fall into three categories:

Viruses: Virus yellows a group of aphid-transmitted viral diseases comprising of Beet Yellows Virus, Beet Mild Yellowing Virus and Beet Chlorosis Virus, which cause foliage to become yellow and thickened. The disease is controlled by drilling seed with insecticidal treatment alongside good farm hygiene practices to reduce the aphid vector. Rhizomania "crazy root" is a serious disease of sugar beet, caused by the Beet Necrotic Yellow Vein Virus (BNYVV), which is transmitted by the oomycete Polymyxa betae. Management of this disease is through partially resistant varieties.

Nematodes: Beet Cyst Nematode (BCN) is a major pest of sugar beet worldwide. It invades the roots, stunting their growth. BCN tolerant cultivars are available, where resistance has been bred from the wild species into modern lines of sugar beet. 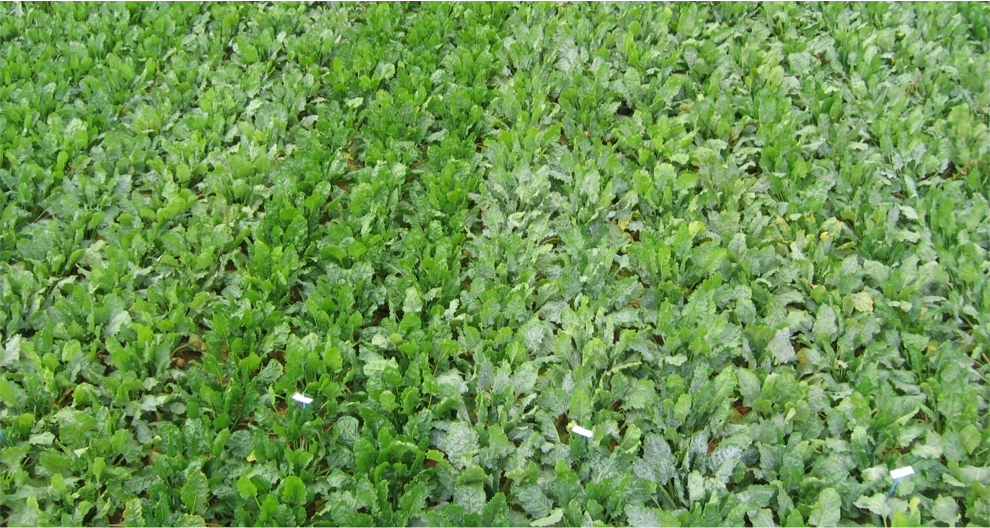 JR: One key aim of your research is to design a rapid detection test for E. betae, a powdery mildew that can reduce sugar beet yield by up to 20 per cent. How prevalent is E. betae and how will the test help reduce the impact of the disease?

LP: The prevalence of E. betae is dependent on the severity of the winter, as mild winters greatly increase the incidence of this pathogen during the following summer. Due to the cooler 2014/2015 winter, this year’s forecast predicts that only 22% of the crop is at risk whereas the previous year 56% was at risk.

At present, we neither understand how fungicidal treatment nor crop variety affects the success of different E. betae races. This is especially important now that some use of triazole-strobilurin fungicides is under review, due to concerns of its adverse effects on the human endocrine system.

By studying the diversity of E. betae infections in an agricultural setting pre and post fungicide treatment, we will improve our understanding of pathogen races that re-infect sugar beet after treatment. The identification of E. betae stains associated with fungicide resistance/tolerance would improve disease forecasting and inform fungicidal treatment and cultivar choice. A rapid DNA-based detection protocol will be designed based on genomic variation information. This will enable early detection and strain identification of E. betae. This detection system, combined with the understanding of pathogen population dynamics and evolution of virulence, will enable the improvement of disease-forecasting models. Which, in turn can be used to influence decision-making in fungicide application.

JR: TGAC also plans to generate a draft genome assembly of another sugar beet pathogen, Uromyces beticola. What is already known about the disease-causing agent and, what do you hope to uncover by studying its genome?

By generating a draft genome assembly of U. beticola we hope to pave the way for further effort in enhancing our understanding the molecular mechanisms of host/pathogen interaction. One such approach would be using comparative genomics and effector mining to identify candidate pathogen effectors, used to aid the suppression of the host immune response.

JR: The fully sequenced sugar beet genome has recently been released. Could you tell us about the possibility of uncovering novel resistance genes once the E. betae genome has also been sequenced?

LP: Currently it is unknown how representative the contemporary powdery mildew resistance field trial inoculum used by industry to find resistance cultivars is. By understanding the diversity of pathogen strains we gain essential information to help us improve future field trials to develop varieties that are resistant to the wider range of E. betae strains.

E. betae infections are also found on a number of wild beet hosts (Beta vulgaris (subsp. Maritima), Beta macrocarpa and Beta (now Patellifolia) patellaris). In the wild, both pathogen and host are able to co-adapt. This means that the wild environment could drive the evolution of novel pathogen races but also host plant resistance. Once armed with sequence information it is possible to test for links between pathogen races in the wild and those that break into cultivated sugar beet. We hope that this research will underpin future studies to identify resistance genes in wild beet that could be bred into sugar beet varieties.