The rise of biologics in drug development has called for more efficient ways to screen viable therapeutic candidates. Since biologics are manufactured in cells, the biomolecule of interest needs to purified and isolated from all of the other biologically active compounds produced by the cell. Monoclonal antibodies (mAbs) are an effective therapeutic for a variety of conditions, from autoimmune diseases to cancer, due to their specificity, stability, and efficacy. In order to develop the best therapeutic mAb for treatment of a disease, hundreds of clones must be screened in downstream assays characterizing specificity, affinity, and binding kinetics. Protein purification, an essential part of this process, is often a bottleneck during screening because of the amount of time it takes to purify mAb therapeutic candidates for characterization in discovery. In addition to finding ways to increase the throughput of purifying mAbs,  mAb degradation due to low pH post affinity capture and specific salt concentration requirements, and pH for cell based functional assays must all be considered.

Manual chromatography techniques that require each sample be injected and collected for injection on the next column is not a sustainable way to screen hundreds of potential mAb therapeutic candidates.  Since most mAb purifications require an affinity capture step followed by a buffer exchange step to ensure the mAbs are suitably purified for screening – a platform for automating this entire purification process would increase throughput and efficiency in a drug discovery lab.

By using a high volume autosampler with Bio-Rad’s NGC™ Chromatography System a highly reproducible medium throughput automated process has been established. The autosampler with the NGC system’s integrated sample pump injects multiple samples, while the tandem purification scheme enables the two column purification to run with no manual intervention. This purification platform resulted in 84 therapeutic mAb samples being purified over two days, yielding pure protein ready for downstream assays. Having a high capacity fraction collector with the flexibility to collect into multiple vessels allows collection of flowthrough and purified mAbs in a format that makes it easy to do downstream concentration measurements and easy to move to performing downstream characterization assays quickly.  With this fully automated process each therapeutic mAb candidate can be purified in 30 to 45 minutes.

mAb candidates were captured using a Protein A resin followed by a buffer exchange on a desalting column.  Using the desalting column in tandem versus dialysis for buffer exchange not only reduces time from an overnight step, but also minimizes sample loss by eliminating the eluate collection step and its injection and retrieval from a cassette. Using a tandem configuration on the NGC Discover™ Pro Chromatography System, columns were automatically equilibrated and cleaned by having the different buffers and cleaning solutions plumbed into each of the pump’s inlet valves. To fully automate the purification of mAb therapeutic candidates a CETAC ASX-560 autosampler with an 84-sample capacity was used to inject samples. The required flow rates for purifying 84 samples within two days resulted in 30 percent sample loss, while reducing the flow rate to two milliliters per minute allowed 70 samples to be purified with only six percent sample loss. Both methods yielded milligram quantities of purified protein, sufficient for downstream cell-based assays.

This fully automated method of screening mAb candidates yielded two to six milligrams of protein at 95 percent purity, assessed by SDS-PAGE (Figure 1). The use of  TGX Stain-Free™ Gels and the Gel Doc™ EZ imaging system cut out the staining and de-staining steps and enabled visualization of bands and assessment of purity in less than 30 minutes. To validate that there was no cross contamination and that this tandem mAb purification platform was suitable for drug discovery, three purified mAb samples were analyzed by LC-MS. No cross contamination was detected by LC-MS. 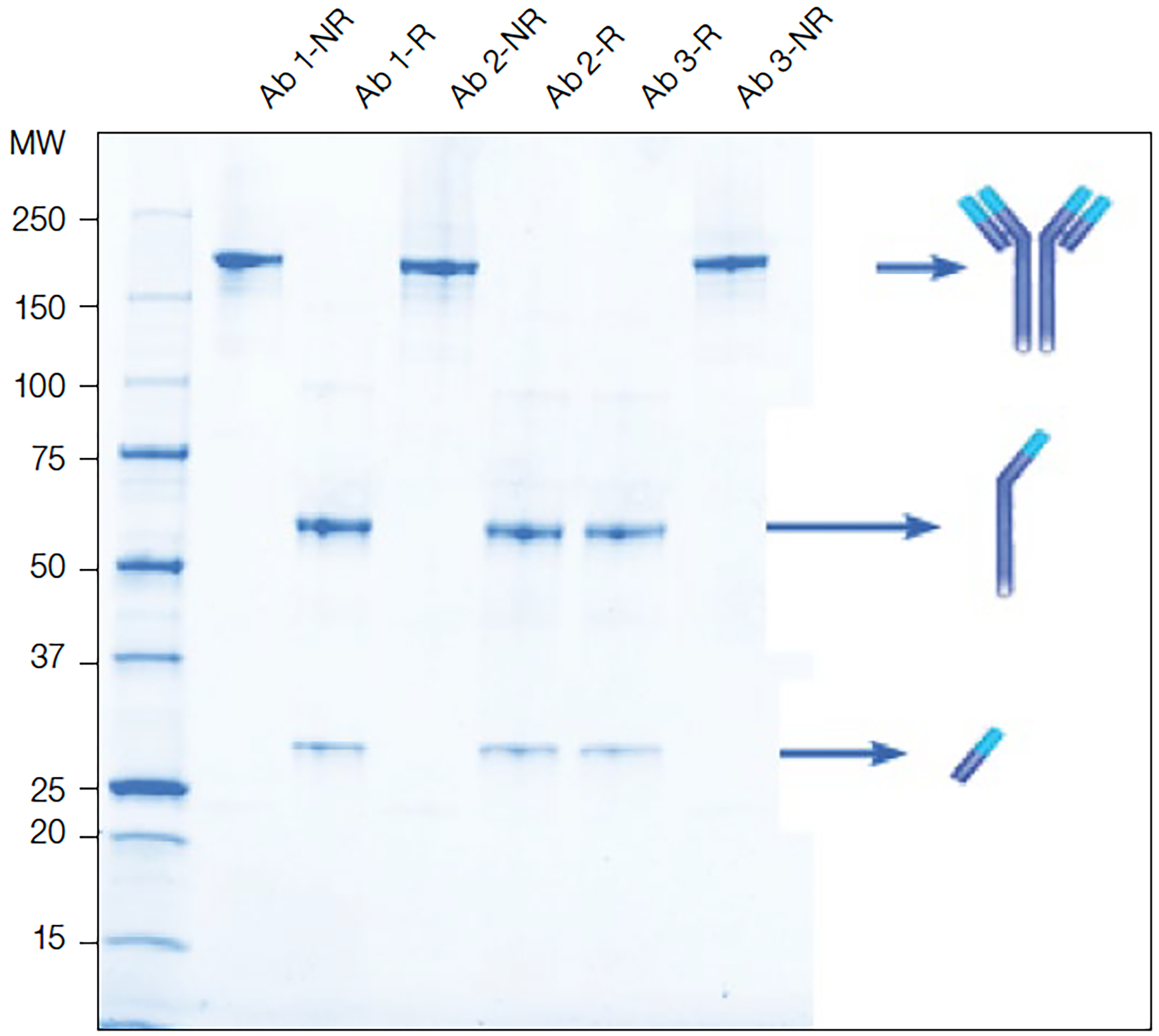 Automating mAb purification schemes can be easily accomplished by modifying existing tandem method templates in the NGC System’s ChromLab Software. Once methods have been developed and communication between the system and the autosampler have been established via the Signal Import Module, then purification of multiple therapeutic mAb candidates can be accomplished in a fully automated fashion. There are several steps in this purification scheme that helped to save time and effort, such as automated sample injection, fast buffer exchange, quick electrophoresis to determine purity, automated tandem purification, and through to collecting in a format that streamlines downstream work.

This method is simple to implement and can easily be adapted to other applications that require different purification schemes. Multidimensional (Multi-D) chromatography requiring more complex purification, such as 3D and 4D automated purifications, can also be carried out using the NGC Chromatography system to achieve the purity level needed for screening any biomolecule drug candidate.

Candice Cox is a Global Product Manager in the Protein Purification Marketing group at Bio-Rad Laboratories. Over her 13 years at Bio-Rad Laboratories she has held different marketing and R&D positions within the Life Science Group. She has a Biotechnology Business Development and Marketing certificate from University of California Berkeley and a B.S. in Biology from the University of California Los Angeles.