Complete the form below to unlock access to this Audio Article: "A Gene-Sequence Swap Using CRISPR to Cure Haemophilia"

Sufferers of hemophilia live in a perpetual state of stress and anxiety: their joints wear down prematurely and they have bleeding episodes that feel like they will never end.  Their bodies lack the ability to make the clotting factor responsible for the coagulation of blood so any cut or bruise can turn into an emergency without immediate treatment.

Hemophilia A occurs in about 1 in 5,000 male births and almost half of severe cases are caused by identified “chromosomal inversions”.  In a chromosomal inversion, the order of the base pairs on the chromosome are reversed so the gene doesn’t express properly and the sufferer lacks the blood coagulation factor VIII (F8) gene, which causes blood to clot in healthy people. 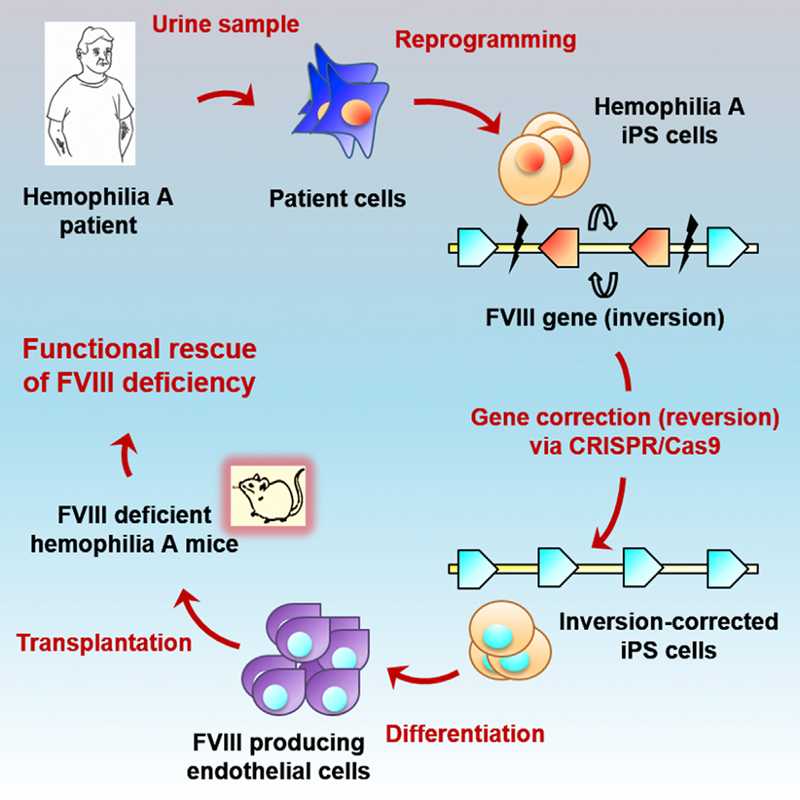 A Korean team led by Director of the Center for Genome Engineering Jin-Soo Kim, Institute for Basic Science (IBS) and Professor Dong-Wook Kim at Yonsei University has experimented with hemoplia A-derived induced pluripotent stem cells (iPSCs) and hemoplia mice and found a way to correct this inversion and reverse the clotting factor deficiency that causes hemophilia A.

This was the first time a type of stem cell called iPSCs--which possess the ability to change into any cell type in the body--was used in a procedure like this. The urinary cells were collected from patients with the chromosomal inversions causing hemophilia to make iPSCs, the team applied CRISPR-Cas9 nucleases (Clustered Regularly Interspaced Short Palindromic Repeats-CRISPR associated protein 9) to them.

According to Director Jin-Soo Kim, “We used CRISPR RGENs [RNA-guided engineered nucleases] to repair two recurrent, large chromosomal inversions responsible for almost half of all severe hemophilia A cases.” Professor Dong-Wook Kim added, “To the best of our knowledge, this report is the first demonstration that chromosomal inversions or other large rearrangements can be corrected using RGENs or any other programmable nuclease in patient iPSCs.”

What may be equally as important to the ability to reverse the chromosomal inversion is the fact that there was no evidence of off-target mutations resulting from the correction.  This was a precision procedure: only the parts of genome that the team wanted to change were affected.

These findings open the door for further testing and if the results are anything like the mice trials, the future of this treatment looks promising.