Complete the form below to unlock access to this Audio Article: "Algae Nutrient Recycling is a Triple Win"

Nitrogen and phosphate nutrients are among the biggest costs in cultivating algae for biofuels. Sandia molecular biologists Todd Lane and Ryan Davis have shown they can recycle about two-thirds of those critical nutrients, and aim to raise the recycling rate to close to 100 percent.

Recycling nitrogen and phosphate has benefits that go far beyond cost. While nitrogen can be produced through a costly artificial nitrogen fixation process using natural gas and atmospheric nitrogen, phosphate is a limited natural resource that can be toxic at high concentration.

“We have a finite amount of phosphate in the world, but it’s in high demand as a fertilizer. Half of the phosphates that go into our crops in the form of fertilizer end up in the Gulf of Mexico, contributing to hypoxic zones,” said Lane. Better known as “dead zones,” hypoxic zones are areas of low oxygen concentration that kill or drive out marine life. 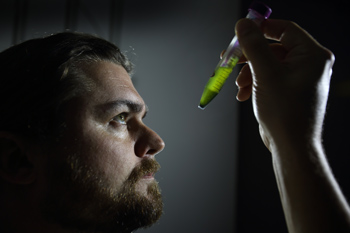 Economic models show that replacing just 10 percent of liquid transportation fuels with algal-derived fuels, though beneficial to the environment in many ways, could double fertilizer consumption, which, in turn, would drive up the cost of food.

Lane and Davis are considering other applications for their closed-loop algae nutrient recycling methods.

“Our method could be used to strip phosphates from the agricultural runoff before it reaches the Salton Sea,” said Davis. Fertilizer runoff into the saltwater sea, California’s largest lake, has led to dead zones that threaten fish and other wildlife. “Those nutrients that would otherwise further contribute to the dead zone could be used to grow algae intentionally for biofuels and other biobased commodities.”

Lane and Davis found their nutrient recycling method works on many different algae feedstocks, even mixed feedstocks. Because algae have more genetic diversity than any other organism, many methods developed in the past haven’t worked universally.

The researchers use a fairly simple process, osmotic shock, to liberate phosphate from the cultivated algae. “We shock the algae with fresh water while controlling certain conditions like pH and temperature. This disrupts the internal structure of the cell and releases naturally occurring enzymes,” explained Lane. “These enzymes chew up the cell and rapidly release the phosphates.”

The next step is fermentation to convert the nitrogen, which is mostly in the form of amino acids, into ammonia. The phosphates and ammonia are then recombined — with help from magnesium, present in great quantities in the algal biomass — to form struvite, a solid salt.

In 2014, a Sandia team proved the method with 20 weeks of continuous recycling and reuse of phosphates and nutrients. They were able to carry over 60 to 80 percent of the nutrients from batch to batch.

“Every two weeks, we recycled the nutrients and fed them back into the next batch of algae,” said Davis. “The process worked better than we expected, as we saw enhanced growth with the recycled nutrients. We aren’t quite sure why this happened. It could be from trace metals carried over in the phosphate.”

The algae nutrient recycling research is part of a larger project funded by the Department of Energy’s BioEnergy Technologies Office, part of the Energy Efficiency and Renewable Energy program. The Sandia team’s partners include Texas A&M AgriLife Research, which grows marine strains of algae, and Texas-based OpenAlgae, which patented methods to lyse algal cells and recover algal lipids without using solvent. Recovered algal oils could be turned into fuel.

“We were very interested in OpenAlgae’s lipid extraction because it doesn’t use solvents, so the biomass is left in a native conformation that works very well with our process,” said Lane.

OpenAlgae’s method subjects algae cells to high energy electromagnetic pulses that rupture the cell walls and cause the cells to burst, releasing the lipids. In this disrupted state, the algae cells are much more susceptible to osmotic shock.

Lane and Davis are working to further refine their method to recycle more of the nutrients, including a collaboration with James Liao of the University of California, Los Angeles, to genetically refine their fermentation strain to increase yield and extract different fuel products. Liao runs the Metabolic Engineering and Synthetic Biology Laboratory and is chairman of the department of chemical and biomolecular engineering and the department of bioengineering.

Another facet of the project is the development of a reactor system to capture the ammonia as the biomass is fermented to release phosphates. Currently, these steps are performed separately.

“The goal is a one-pot system,” said Davis. “That will be the tipping point for scaling up our method. We grew 2 liters of algae in our 20-week test. The next step is to grow 3,000 liters in our raceways.” Later this year, Sandia will open three 1,000-liter raceway testbeds, shallow artificial ponds for algae cultivation.

Pond-side processing is another goal. A single module combining lipid extraction and nutrient recycling could separate biomass into nutrients and fuel at a cultivation facility.

Lane and Davis think their method could help the environmental if applied to agricultural runoff.

Nutrient recycling is like panning for gold — or in this case, phosphates — anywhere that fertilizer-laden agricultural runoff enters bodies of water. The key, said Lane, is getting the concentrated runoff before it enters the body of water and dilutes.

“Our method can’t fix the existing dead zones,” said Lane. “But it can stop them from growing. The irony is that those nutrients are so valuable to growing plants, but so damaging when they flow into large bodies of water. Isaac Asimov famously called phosphates ‘life’s bottleneck.’ We aim to put an end to that bottleneck.”

Downstream Processing in the Age of Precision Medicine: Trends and Challenges