Scanning electron micrograph (SEM) image of individual nanowires and groups of nanowires. Each wire can produce an electric current when hit by light.

A team of engineers at the University of California San Diego and La Jolla-based startup Nanovision Biosciences Inc. have developed the nanotechnology and wireless electronics for a new type of retinal prosthesis that brings research a step closer to restoring the ability of neurons in the retina to respond to light. The researchers demonstrated this response to light in a rat retina interfacing with a prototype of the device in vitro.

They detail their work in a recent issue of the Journal of Neural Engineering. The technology could help tens of millions of people worldwide suffering from neurodegenerative diseases that affect eyesight, including macular degeneration, retinitis pigmentosa and loss of vision due to diabetes.

Despite tremendous advances in the development of retinal prostheses over the past two decades, the performance of devices currently on the market to help the blind regain functional vision is still severely limited -well under the acuity threshold of 20/200 that defines legal blindness.

“We want to create a new class of devices with drastically improved capabilities to help people with impaired vision,” said Gabriel A. Silva, one of the senior authors of the work and professor in bioengineering and ophthalmology at UC San Diego. Silva also is one of the original founders of Nanovision.

The new prosthesis relies on two groundbreaking technologies. One consists of arrays of silicon nanowires that simultaneously sense light and electrically stimulate the retina accordingly. The nanowires give the prosthesis higher resolution than anything achieved by other devices—closer to the dense spacing of photoreceptors in the human retina. The other breakthrough is a wireless device that can transmit power and data to the nanowires over the same wireless link at record speed and energy efficiency.

One of the main differences between the researchers’ prototype and existing retinal prostheses is that the new system does not require a vision sensor outside of the eye to capture a visual scene and then transform it into alternating signals to sequentially stimulate retinal neurons. Instead, the silicon nanowires mimic the retina’s light-sensing cones and rods to directly stimulate retinal cells. Nanowires are bundled into a grid of electrodes, directly activated by light and powered by a single wireless electrical signal. This direct and local translation of incident light into electrical stimulation makes for a much simpler—and scalable—architecture for the prosthesis.

The power provided to the nanowires from the single wireless electrical signal gives the light-activated electrodes their high sensitivity while also controlling the timing of stimulation.

“To restore functional vision, it is critical that the neural interface matches the resolution and sensitivity of the human retina,” said Gert Cauwenberghs, a professor of bioengineering at the Jacobs School of Engineering at UC San Diego and the paper’s senior author.

Power is delivered wirelessly, from outside the body to the implant, through an inductive powering telemetry system developed by a team led by Cauwenberghs.

The device is highly energy efficient because it minimizes energy losses in wireless power and data transmission and in the stimulation process, recycling electrostatic energy circulating within the inductive resonant tank, and between capacitance on the electrodes and the resonant tank. Up to 90 percent of the energy transmitted is actually delivered and used for stimulation, which means less RF wireless power emitting radiation in the transmission, and less heating of the surrounding tissue from dissipated power.

The telemetry system is capable of transmitting both power and data over a single pair of inductive coils, one emitting from outside the body, and another on the receiving side in the eye. The link can send and receive one bit of data for every two cycles of the 13.56 megahertz RF signal; other two-coil systems need at least 5 cycles for every bit transmitted. 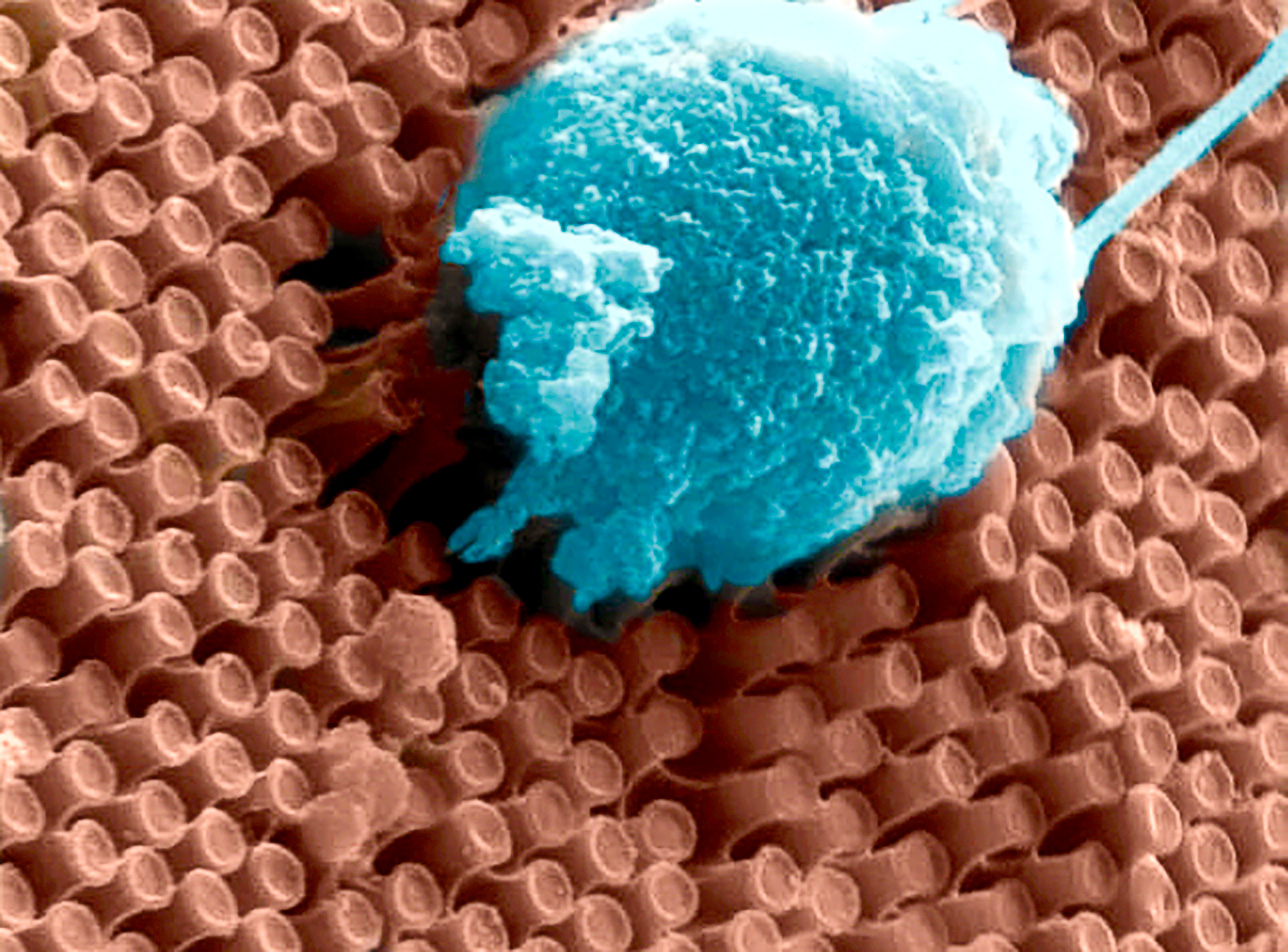 Primary cortical neurons cultured on the surface of an array of optoelectronic nanowires. Here a neuron is pulling the nanowires, indicating the the cell is doing well on this material.

The horizontal and bipolar neurons fired action potentials preferentially when the prosthesis was exposed to a combination of light and electrical potential—and were silent when either light or electrical bias was absent, confirming the light-activated and voltage-controlled responsivity of the nanowire array.

A path to clinical translation 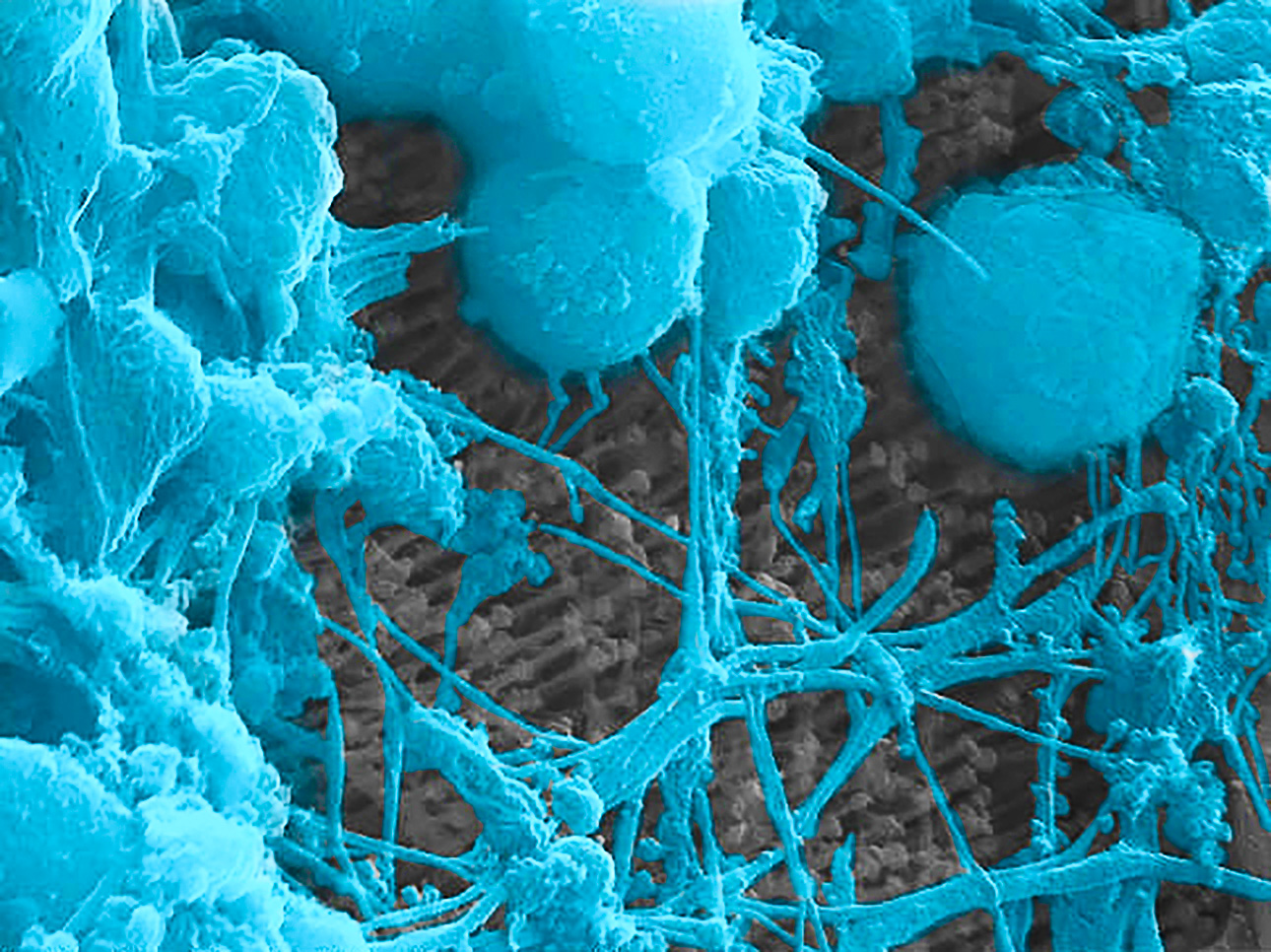 Primary cortical neurons cultured on the surface of an array of optoelectronic nanowires. Note the extensive neurite outgrowth and network formation.

Freeman, Silva and Scott Thorogood, have co-founded La Jolla-based Nanovision Biosciences, a partner in this study, to further develop and translate the technology into clinical use, with the goal of restoring functional vision in patients with severe retinal degeneration. Animal tests with the device are in progress, with clinical trials following.

“We have made rapid progress with the development of the world's first nanoengineered retinal prosthesis as a result of the unique partnership we have developed with the team at UC San Diego,” said Thorogood, who is the CEO of Nanovision Biosciences.

This article has been republished from materials provided by UC San Diego. Note: material may have been edited for length and content. For further information, please contact the cited source.