Molly Campbell is a senior science writer at Technology Networks. She holds a first-class honors degree in neuroscience. In 2021 Molly was shortlisted for the Women in Journalism Georgina Henry Award.
Learn about our editorial policies
Credit: Kate Trysh on Unsplash.

A new study in the Biophysical Journal outlines the work of scientists who have created a series of compounds that could serve as an alternative synthetic energy source for myosin.

The "energy currency" of life

Marrying biology and engineering permits the design or redesign of biological molecules and complex systems that do not exist naturally in the world – the applications of which are unprecedented.

The latest addition to the growing literature of synthetic biology research is a collaborative study by Woodward and colleagues, published in the Biophysical Journal. The scientists have combined chemistry, kinesiology and computational modeling to discover an alternative energy source to adenosine triphosphate (ATP) for muscles.

The research was born from a shared commute to the University of Massachusetts Amherst. Ned Debold and chemist Dhandapani Venkataraman (DV) spent their bus journey discussing a mutual fascination with energy conversion – for Debold, this interest focused on muscle tissue, whereas Venkataraman was pondering about solar cells.

Debold's team had been exploring an alternative energy source to ATP, the energy-carrying molecule that powers the contraction of muscles and movement and is considered by many as the "energy currency" of life. In the body, muscle shortening takes place as myosin heads bind to a protein known as actin and pull the actin inwards. To provide the energy for this process, ATP is hydrolyzed to adenosine diphosphate – releasing an inorganic phosphate molecule and energy.

If ATP is the energy currency of life – why do we need an alternative source? 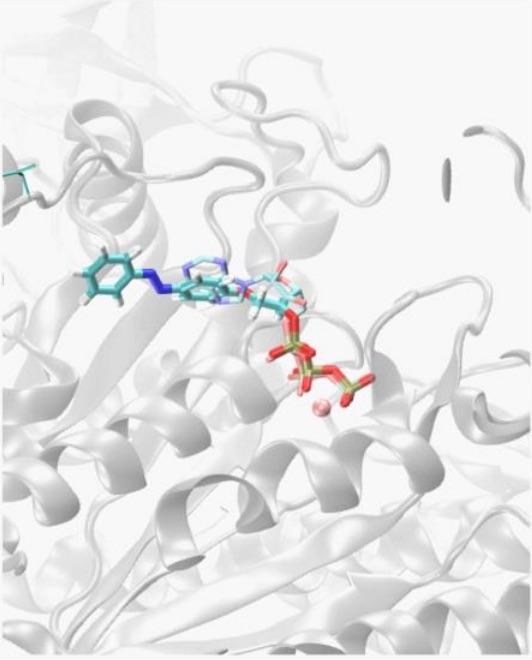 Myosin with azoTP and ATP in its active site. Credit: UMass Amherst/Debold lab.

A new compound to boost or inhibit myosin

There are several human diseases that involve the musculoskeletal system, such as cerebral palsy, multiple sclerosis, chronic heart failure and amyotrophic lateral sclerosis. Some of these conditions involve muscle-spasms, involuntary movement or muscle stiffness and weakness. As treatment options are somewhat limited, they can prove highly debilitating and adversely impact the individual's quality of life. The ability to create a new compound that could either inhibit or enhance myosin function could offer novel treatment options for patients.

In a press release, Venkataraman notes that the typical approach to seeking out a new compound is to systematically test a series of compounds until you find one that seems worth following up, likened to searching for a needle in a haystack: "At one point I suggested to Ned, 'Why don't we build the needle ourselves instead?' That started us on this interesting project that put together people who would otherwise never work together."

Venkatarman would create the synthetic molecules, and Debold would test their effects on myosin. But it soon became clear that a bridge was needed between the two – someone to model the interactions computationally – and so chemist Jianhan Chen joined the research team.

“We did computer modeling because experimentally it is difficult to know how myosin might be using the molecules DV was synthesizing. We can use computer simulation to provide a detailed picture at the molecular level to understand why these compounds might have certain effects. This can provide insight into not only how myosin interacts with the current set of compounds, but also it can provide a roadmap for DV to use to design new compounds that are even more effective at altering myosin function," Chen said in a press release.

To create the synthetic molecules, Venkataraman turned to positional isomerism, in which the carbon skeleton of a molecule remains unchanged, but groups are effectively moved around on that skeleton. In the paper, it is described by the team as a "simple and powerful tool to control the molecular motor of muscle, myosin".

The results published in the Biophysical Journal show that the scientists were able to synthesize three isomers of a new ATP substitute: "Using three isomers of a synthetic non-nucleoside triphosphate we demonstrate that myosin’s force and motion generating capacity can be dramatically altered at both the ensemble and single molecule levels. By correlating our experimental results with computation, we show that each isomer exerts intrinsic control by affecting distinct steps in myosin’s mechano-chemical cycle," the authors state in the paper.

Venkataraman added in a press release: “My lab had never made such types of compounds before, we had to learn a new chemistry; my student Eric Ostrander worked on the synthesis.”

The researchers demonstrate what appears to be a simplistic yet powerful approach to gaining control over molecular motor function, but it's still early days. Taking the research forward, the team will endeavor to map various points of myosin's biochemical cycle, a concept which is still somewhat elusive to scientists.

“In the muscle research field, we still don’t fully understand how myosin converts energy gain from the food we eat into mechanical work. It’s a question that lies at the heart of understanding how muscles contract. By feeding myosin carefully designed alternative energy sources, we can understand how this complex molecular motor works. And along the way we are likely to reveal novel targets and approaches to address a host of muscle related diseases," Debold said.