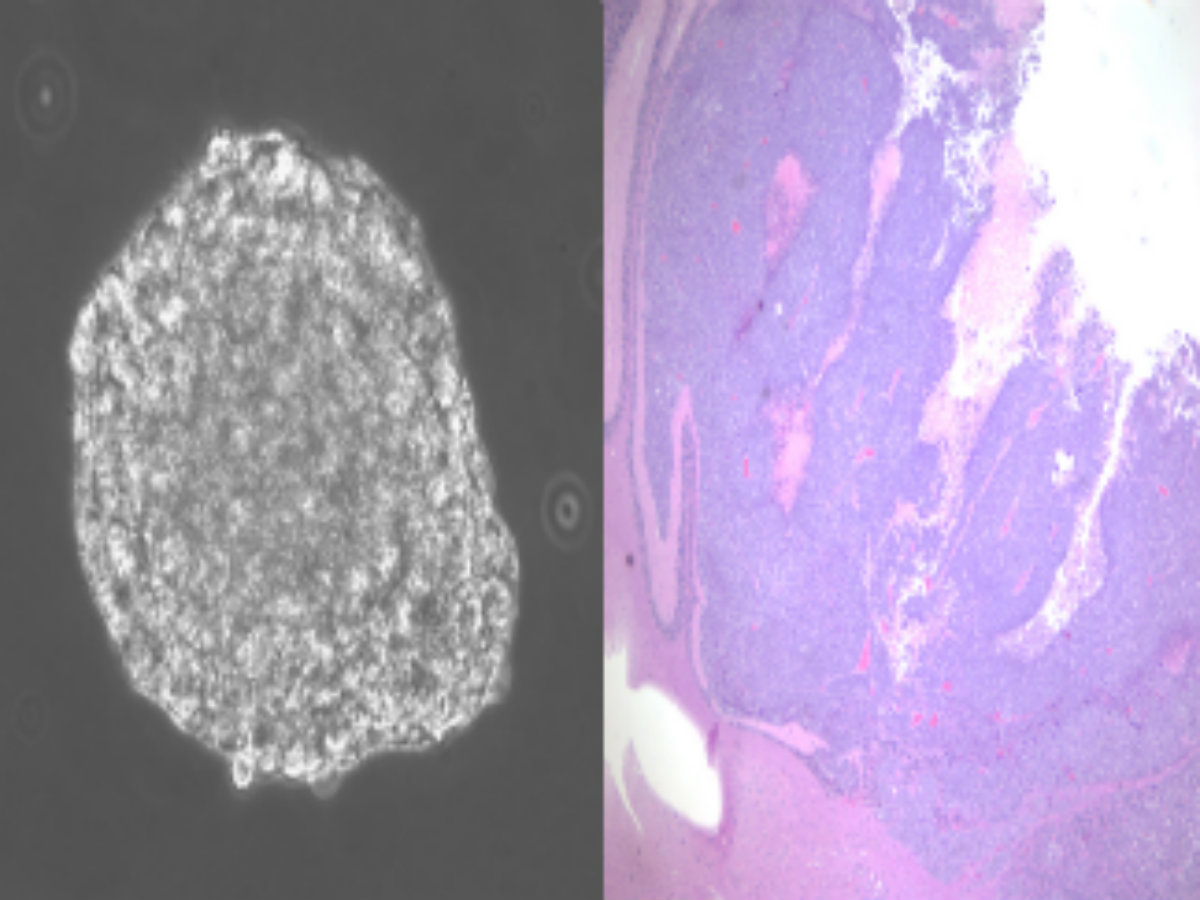 In search of a better laboratory model for studying an aggressive kind of medulloblastoma, a group of researchers led by a team from the Johns Hopkins Kimmel Cancer Center has created their own system for studying this rare pediatric brain tumor.

The researchers engineered neural stem cells, which can develop into any type of brain cell, to carry mutations thought to drive this particular subtype of medulloblastoma. When implanted into mice, the engineered cells successfully replicated how medulloblastoma develops and spreads in patients.

Using a computer algorithm, the researchers then matched the engineered cells’ genetic profile with a drug sensitivity database representing hundreds of cancer cell lines and identified a class of drugs that would likely have anticancer activity in similar tumors. One of these drugs, palbociclib (Ibrance®), proved to extend survival in mice implanted with medulloblastoma cells.

More than 60% of children with medulloblastoma can be cured. But medulloblastoma is not a single disease. Researchers have identified four subtypes of the cancer, defined by the genetic mutations they carry, that respond differently to treatment. One of these subtypes, Group 3 medulloblastoma, has a very poor prognosis. Even with intensive treatment, few children with this subtype survive more than a few years after diagnosis.

Treatments that target the genetic mutations driving Group 3 medulloblastoma are urgently needed for this group of patients, said Eric Raabe, M.D., Ph.D., a pediatric oncologist and lead author of the study. But to identify potentially effective drugs, he and his colleagues wrote, genetically accurate laboratory models of Group 3 medulloblastoma are needed to test those drugs.

Existing models all have limitations. For example, cells from many patients’ tumors cannot be grown in the laboratory. For those that can be grown in culture, laboratory conditions can select for genetic changes that, over time, can make the cultured cells too different from the original tumor to be useful as models. And human tumors grown in animals can be so genetically complex that it can be difficult to tell which mutations are actually responsible for tumor growth.

To circumvent these shortcomings, Dr. Raabe and his colleagues engineered human neural stem cells to create a new model of medulloblastoma. They altered a set of genes that previous studies suggested help drive Group 3 tumors—MYC, TP53, hTERT, and AKT—by using genetically engineered viruses to replace copies of the normal genes with mutated copies.

When they injected the engineered stem cells into the brains of mice, the cells formed aggressive tumors, which continued to express the mutated genes. About 20% of these tumors spread to the spine, similar to the pattern of metastasis seen in some Group 3 tumors.

Dr. Raabe’s team also developed a computer-based method to identify drugs that might be effective against medulloblastoma, called Disease-model Signature vs. Compound-Variety Enriched Response (DiSCoVER). The DiSCoVER tool compared the gene expression profile (or “molecular signature”) of the engineered medulloblastoma cells with the profiles of all the cancer cell lines in a large database.

Because the cell lines in the database had been treated with a wide range of drugs, “we could figure out which cell lines were most closely related to our neural stem-cell model of medulloblastoma, and then use that information to predict which drugs might also be active in this model,” explained Dr. Raabe.

DiSCoVER predicted that a class of drugs called cyclin-dependent kinase (CDK) inhibitors would be effective against the engineered medulloblastoma cells. The researchers tested one such CDK inhibitor—palbociclib, which is approved for the treatment of metastatic breast cancer—in mice bearing tumors derived from their engineered stem cells.

Treatment with the drug extended median survival of the mice by almost 50%, from 25 to 37 days. Analysis of tumor samples taken from the mice showed that the drug had crossed the blood-brain barrier, penetrated the tumor, and inhibited tumor cell growth.

Based on this study, and others awaiting publication, the Children’s Oncology GroupExit Disclaimer is exploring the possibility of including a CDK inhibitor in a clinical trial currently being planned for patients with relapsed medulloblastoma, said Dr. Raabe.

He and his colleagues are now using their methods to engineer a model of another medulloblastoma subtype. “We’ve used pediatric cancer as a model because we’re pediatric oncologists, but we think this could be done with other cancer types as well,” he said.

“When testing therapies on patients with rare tumors, it becomes increasingly important to prioritize which therapies go into clinical trials, due to the limited patient population,“ said Karlyne Reilly, Ph.D., head of the Genetic Modifiers of Tumorigenesis Section in NCI's Center for Cancer Research, who was not involved in the study.

“The approach taken by Dr. Raabe and his colleagues has the potential to accelerate candidate therapy identification for many rare tumors and subtypes of more common tumors, particularly as the increased use of genomic characterization of tumors identifies genetic drivers that can be used to help design models for drug testing,“ she concluded.