Engineered T cell therapies, in which an individual's own immune system is harnessed to treat cancer, represent a new era in cancer immunotherapy. One such therapy is T cell receptor (TCR) therapy, in which T cells are extracted from a patient and genetically engineered in the laboratory (ex vivo, or "outside of the body") to express a synthetic TCR. The edited T cells are multiplied in the laboratory before being infused back into the patient. Once inside the patient's body, the modified TCR helps the T cells to target specific antigens and kill the cancer cells.

Several engineered T cell therapies are marketed and are being used in patients that would otherwise have very limited treatment options. Whilst TCR is an efficacious therapy for some individuals, it isn't without its shortcomings. What is Cancer Immunotherapy?

END_OF_DOCUMENT_TOKEN_TO_BE_REPLACED

This reduces the expression of the genetically engineered TCR and can also generate TCRs that are "self-reactive". Furthermore, T cell exhaustion can occur which stops optimal control of tumors.

The applications of the CRISPR-Cas9 gene editing mechanism in modern medicine are being widely explored for a variety of disease areas. So how exactly can CRISPR be used to improve cancer immunotherapy?

Let's go back to the shortcomings of the engineered T cell therapies. What do we know about the physiological mechanisms underlying these shortcomings?

Preclinical research has demonstrated that CRISPR-Cas9 mediated disruption of a gene known as PDCD1 in human T cells induced with a chimeric antigen receptor increased antitumor efficacy in xenografts. PDCD1 is a gene that encodes the production of the programmed cell death protein 1 (PD-1). This research therefore indicates that the PD-1 protein plays a role in antigen responses.2

In mice, the transfer of T cells  that were targeted against a specific cancer antigen known as New York esophageal squamous cell carcinoma 1 (or NY-ESO-1), in addition to a monoclonal antibody that targeted PD-1, enhanced antitumor efficacy.3

The ability to edit and remove these genes using CRISPR-Cas9 therefore provides a powerful tool to enhance the natural ability of human T cells to fight cancer. 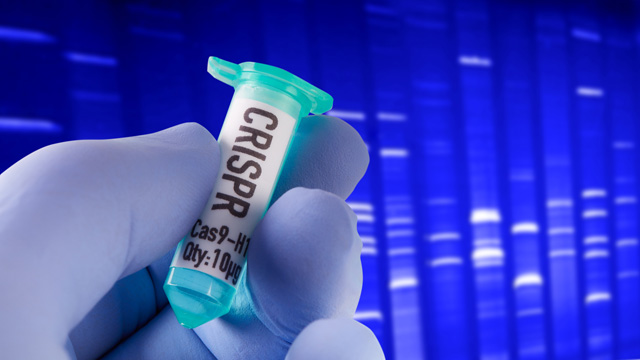 CRISPR for cancer – what the world’s been waiting for?

Edward Stadtmauer, MD, Perelman Center for Advanced Medicine told Technology Networks: "The insertion of chimeric antigen receptors into T cells over the last decade has revolutionized the therapy for advanced cancers like acute leukemia and non-Hodgkin lymphoma. Unfortunately, there are still many patients with these diseases that do not respond or relapse and other cancers that we still need to find effective cellular therapies. CRISPR technology enabling removal of genes in addition to the addition of genetic material adds an additional dimension for engineering of T cells to make them more targeted and effective as an anti-cancer therapy." END_OF_DOCUMENT_TOKEN_TO_BE_REPLACED

However, the safety of applying CRISPR-Cas9 gene editing in human cells for therapeutic purposes is still in the early stages of research.

Stadtmauer and colleagues designed a first-in-human Phase I human clinical trial to test both the safety and feasibility of CRISPR-Cas9 genome editing for synthetic biology cancer immunotherapy.

The trial included three participants, two females and one male. When asked about the choice of sample, Regina Young, Director of Research Operations at the Center for Cellular Immunotherapies and one of the study authors told Technology Networks: "Two myeloma patients and one sarcoma patient were treated. The CRISPR-edited T cell product used in this trial targets tumors expressing NY-ESO-1 and requires the presence of an antigen, HLA A2. Patients were screened for study eligibility."

Stadtmauer adds: "This was just a small sample of patients to determine safety and feasibility of this novel approach. The average age of a patients with myeloma is 69 years. Sarcoma is younger. A larger sample is required to assess the clinical effectiveness of an approach like this."

In the trial, T cells were removed from the patients' blood and edited using CRISPR to delete a select set of genes. Young says: "Three genes were removed using CRISPR-Cas9 editing: the endogenous TCR chains, TCRα (TRAC) and TCRβ (TRBC), to limit TCR mispairing and improve the expression of the cancer-specific TCR transgene, and PD-1 (PDCD1), to limit T cell exhaustion."

The T cells were then engineered by lentiviral transduction to express HLA A2-restricted TCR-specific for the SLMMWITQC peptide in NY-ESO-1. The resulting T cell was named “NYCE” (NY-ESO-1 transduced CRISPR 3X edited cells).

"NYCE" results from the pilot study

The cells were infused back into the patient and cell engraftment and persistence were monitored. In the paper, the authors state that the infusions were well tolerated with no serious adverse events (SAEs). There were no incidences of cytokine release syndrome, a life-threatening inflammatory response previously associated with cancer immunotherapies. High peak levels and sustained persistence of the engineered cells in the blood was found for all three patients.

Chromosomal translocations were detected in the trial, but the authors note that the frequency of these decreased over time. Young told Technology Networks: "The rearrangements declined in frequency over time suggesting that they conferred no evidence of a growth advantage."

When asked about the biggest challenges faced in this research, Stadtmauer told Technology Networks "To be eligible for this trial, patients needed to have myeloma or sarcoma, have few other options, be well enough to proceed with this therapy, have a genetic sub type (HLA A201) seen in perhaps 20-50% of the population as well as the NYESO antigen on the tumor. We needed to screen 43 potential patients to accrue the three patients we treated with the CRISPR modified T cells. This screening process took approximately 1 year."

In the paper, the authors comment that the trial demonstrates "the initial safety and feasibility of multiplex CRISPR-Cas9 T cell human genome engineering in patients with advanced, refractory cancer." However, the small sample size can't be ignored. Stadtmauer and colleagues say: "We note that while the initial clinical results have acceptable safety, experience with more patients given infusions of CRISPR-engineered T cells with higher editing efficiencies, and longer observation after infusion, will be required to fully assess the safety of this approach."

"We have shown proof of principal"

We asked what the next steps are for the team, to which Stadtmauer replied, "Building on this work, designing new cellular therapies, using next generation technologies and different tumour targets and genetic modifications."

He concludes, "The gene editing field is rapidly advancing. Our trial used cutting edge techniques at the time they were developed. We have shown proof of principle. We are very confident that with even more technology advances the manufacturing and effectiveness of the genetically modified T cells will become easier and applicable for a greater population of patients in need."

A Gene Serves Both a Protective and Destructive Role in Health

Researchers suggest that the gene ENDU-2 could be responsible for triggering tumors in the body. The team discovered that while under stress, ENDU-2 can contribute both to the protection of the organism and to its destruction.

END_OF_DOCUMENT_TOKEN_TO_BE_REPLACED

Researchers from the University of Illinois Chicago have discovered a new gene-editing technique that allows for the programming of sequential cuts — or edits — over time.

END_OF_DOCUMENT_TOKEN_TO_BE_REPLACED

127 Glaucoma Genes Identified in Largest Study of Its Kind

In the largest genome-wide association study of glaucoma comparing the genes of 34,179 people with the disease to 349,321 control subjects, an international consortium of researchers identified 44 new gene loci and confirmed 83 previously reported loci linked to glaucoma. Loci are considered "genetic street addresses," denoting a specific location on a gene.