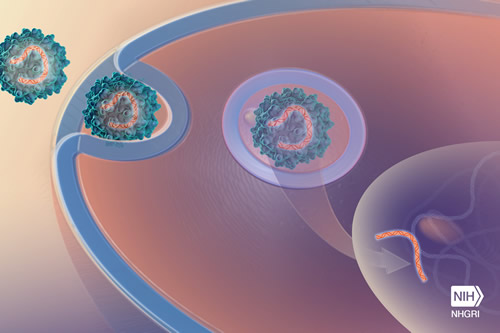 For the first time, National Institutes of Health (NIH) researchers have demonstrated in mice that gene therapy may be the best method for correcting the single faulty gene that causes Niemann-Pick disease, type C1 (NPC1). The gene therapy involved inserting a functional copy of the NPC1 gene into mice with the disease; the treated animals were then found to have less severe NPC1 symptoms. The study, led by researchers at NIH's National Human Genome Research Institute (NHGRI) and the Eunice Kennedy Shriver National Institute of Child Health and Human Development, was published Oct. 26, 2016, in the journal Human Molecular Genetics.

Niemann-Pick disease is a rare and fatal disorder of the central nervous system (the brain and spinal cord) that has no cure. The disease occurs when a faulty housekeeping gene fails to remove cell waste, like lipids and cholesterol. The accumulation of waste in the spleen, liver and brain causes progressive deterioration in the intellectual and motor functions. It also shortens patient's lives, as people with Niemann-Pick disease typically die in their teens. There are several types of Niemann-Pick disease; this study focused on mice that had been bred with a faulty NPC1 gene to model Niemann-Pick disease, type C1.

The researchers' goal was to correct the faulty NPC1 gene in as many cells and organs as possible, with a strong focus on the brain. To do this, they used a non-disease-causing virus called the adeno-associated virus serotype 9 (AAV9) to transfer functioning NPC1 to the cells. The AAV9 containing a functioning NPC1 gene successfully crossed the blood-brain barrier, reaching cells in the brain and elsewhere. Once inside cells, the normal NPC1 gene was then able to make the functional NPC1 protein to correct the cell defects.

With a single injection, mice showed improvements in motor coordination, weight gain and longevity compared to those without this gene therapy. The effect of gene therapy equaled that of a drug called VTS-270, which has been evaluated in preclinical and clinical studies at numerous academic labs. However, to be effective, the VTS-270 compound has to be given for the life of the mouse. The team is now investigating if a combination of the two therapies will improve results.

"Our work in NPC1 mice may help lead to human clinical trials and eventually FDA approval for gene therapy as a treatment for NPC1 disease," said Charles P. Venditti, M.D., Ph.D., senior investigator in the NHGRI Medical Genomics and Metabolic Genetics Branch. "For NPC1 patients, gene therapy could halt progression of the disease, improve the quality of their lives and, hopefully, increase the patient's life span."