Molly Campbell is a senior science writer at Technology Networks. She holds a first-class honors degree in neuroscience. In 2021 Molly was shortlisted for the Women in Journalism Georgina Henry Award.
Learn about our editorial policies
Credit: National Cancer Institute on Unsplash.
Read time:

Complete the form below to unlock access to this Audio Article: "mRNA Therapy for Ovarian Cancer Delivers Positive Results in Mice"

A novel messenger RNA (mRNA)-based therapy has delivered promising results for treating ovarian cancer and cachexia – a muscle-wasting condition – when tested in animals.

In late 2020, the first mRNA-based vaccine received emergency use authorization for COVID-19. Decades of studies exploring the therapeutic value of RNA preceded this announcement, with cancer treatment being a focus of much research.

mRNA is the “middleman” between DNA code and proteins. Through the process of transcription, DNA templates are used to create a single strand of mRNA, which can travel beyond the nucleus of a cell and into the cytoplasm. Here, mRNA is used to build proteins based on that specific mRNA sequence through a process called translation.

mRNA-based therapeutics or preventatives elicit their effects by delivering a specific protein code to a targeted cell. Depending on the code inserted, the protein may be produced to stimulate the generation of antibodies, or to trigger an alternative immune response.

Ovarian cancer accounts for more deaths than any other cancer affecting the female reproductive system. The risk of developing ovarian cancer during a person’s lifetime is estimated to be 1 in 78. Post-diagnosis, a patient has a 30% chance of a five-year survival rate if the cancer has spread beyond the ovaries.

Researchers at Oregon State University and Oregon Health & Science University have developed a novel therapeutic that utilizes lipid nanoparticles (or LNPs) to deliver mRNA to cancer clusters. The mRNA sequence encodes a protein called follistatin that, when produced, acts against a second protein – activin A – which is elevated in aggressive ovarian cancer and an associated condition called cachexia.

Cachexia, sometimes called “wasting syndrome”, commonly occurs in late-stage cancers and other diseases such as HIV, kidney disease and heart disease. It involves the loss of weight and muscle mass, even if a patient continues to eat. The symptoms can be exacerbated by medication that is required to treat the disease itself.

Oleh Taratula is an OSU College of Pharmacy professor and co-developer of the therapy, alongside Professor Daniel Marks of OHSU. The research is part of a five-year grant awarded to Taratula and Marks from the National Institutes of Health.

“Usually, patients don’t learn they have ovarian cancer until it’s at an advanced stage and has reached the abdominal cavity,” Taratula said. “Treatment has been limited to surgical removal of as much of the cancer as possible, followed by chemotherapy. Most patients do initially respond to chemotherapy, but the responses generally aren’t long lasting.”

The mRNA therapy is administered using an injection directly into the peritoneal cavity. “By changing the characteristics of the cancer cells, mRNA treatment can lead to a range of positive effects,” Taratula said. “It prevents the build-up of ascites – abdominal fluid containing cancer cells. It also delays disease progression and induces the formation of small, solid tumors that don’t adhere to organs and thus can be more easily removed. And it combats cachexia by helping to preserve muscle mass." 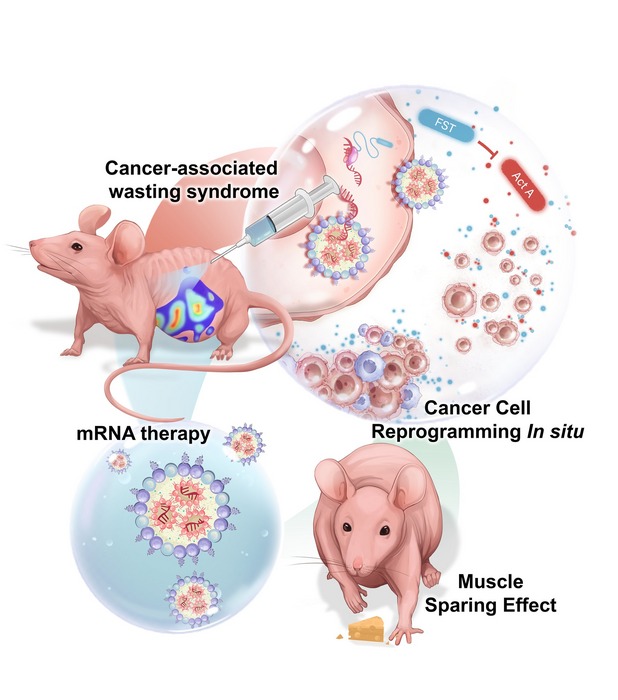 The research team tested the therapeutic in cancer-bearing mice, and in mice also receiving cisplatin – a chemotherapy treatment for ovarian cancer that is currently the standard of care. Mice that received both the mRNA-based therapeutic and cisplatin lived longer and showed less atrophy of the muscles compared to mice that received just one type of therapy.

“Chemotherapy remains the frontline treatment for metastatic disease, but it comes at a high cost – loss of muscle mass, depletion of fat stores, fatigue and systemic inflammation,” Marks said. “There is a clear need to find new therapies and drug combinations that improve the efficacy and tolerability of chemotherapy, and we think we’ve taken a big step in that direction.”

This article is a rework of a press release issued by the Oregon State University. Material has been edited for length and content.