Associate Professor of Chemistry Brian Miller and post-doctoral researcher Carl Whittington have reported that a key enzyme involved in the body’s response to glucose can essentially be corrupted by a new mechanism that scientists have not seen before. This discovery shifts the current understanding of how this enzyme participates in certain diseases, including hyperinsulinemia and diabetes.

“In principle, our findings could open the door for a new approach to treat diseases of glucose homeostasis, such as diabetes,” Miller said.

The enzyme is called glucokinase and serves as the body’s primary glucose sensor as it relays signals in the pancreas and liver telling other areas of the body to take up and process glucose. When that enzyme function is impaired, a person often suffers from diabetes, or other glucose-related illnesses. 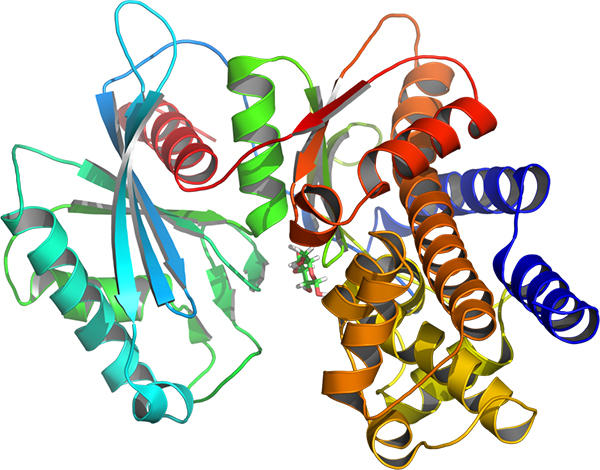 Because of its role in the cell, glucokinase has received considerable attention by pharmaceutical companies as a potential therapeutic target. More than a decade ago, researchers uncovered drugs that activate the enzyme, which offered hope for treating type 2 diabetes.

The focus, however, was on only one way that the enzyme was activated. Miller and Whittington’s research showed there is actually another avenue for activation.

The work showed that this new activation mechanism is operational in clinically characterized disease forms of the enzyme. Activation of glucokinase is a known cause of hyperinsulinemia, a disease characterized by over secretion of insulin even in the absence of glucose, often leading to insulin resistance.

“Glucokinase-associated hyperinsulinemia varies in severity depending upon the level of activation of the enzyme,” Whittington said. “Our study is important because it sheds new light onto how the functional properties of the enzyme can manifest in disease.”

In addition to the direct medical implications, the new study also shifts a fundamental principle of biochemistry known as allostery. Allostery is one way in which the function of proteins in the cell are controlled and regulated. Previously, scientists believed that allosteric regulation of glucokinase depended on strict structural transitions of the biomolecule. But, the new research indicates, that regulation of the enzyme relies not only on its structure, but also on its inherent flexibility and how the enzyme moves over different periods of time.

In collaboration with Professor Rafael Brüschweiler of The Ohio State University, the FSU researchers used a method known as nuclear magnetic resonance, or NMR, to probe the functional dynamics of the glucokinase in great detail. This research built upon another paper Miller and Brüschweiler wrote in Angwandte Chemie last month that quantified the structural dynamics of both normal and disease-variant forms of glucokinase.

“We can see which parts of the enzyme move at what rate and speed,” Brüschweiler said, “and thereby directly interfere with the catalytic process, giving rise to this enzyme’s complex response to changes in glucose levels that is essential for its proper function in the human body.”

This discovery will stimulate additional research by the Miller and Brüschweiler team in an attempt to fully understand the new activation process.

It may also generate renewed interest in glucokinase from the pharmaceutical arena.

According to the American Diabetes Association, 29.1 million Americans have diabetes and case numbers are expected to rise. There have been some complications with diabetes drugs that activate glucokinase.  As a result, some companies have started looking at other options to treat the disease, and the new findings might aid this process.