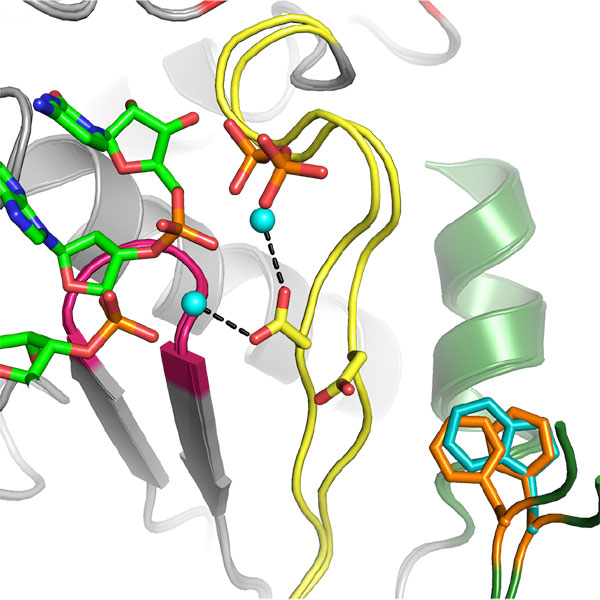 It may have a funny name – coxsackievirus – but there’s nothing funny about how this tiny germ and its close relatives sicken their hosts.

Colorado State University researchers led by Olve Peersen, a professor in the Department of Biochemistry and Molecular Biology, have designed a genetic modification to one type of coxsackievirus that strips its ability to replicate, mutate and cause illness. They hope their work could lead to a vaccine for this and other viruses like it.

The results are published in The Journal of Biological Chemistry, and co-authored with Marco Vignuzzi at Paris’ Institut Pasteur. Peersen’s group seeks to understand the complex biochemical replication machinery of positive-sense single-stranded RNA viruses, a group that includes coxsackievirus, poliovirus, dengue and Zika.

For their most recent work, the team focused on the coxsackievirus B3, which causes heart disease. (It is closely related to coxsackie A viruses, which cause hand, foot and mouth disease in children.)

Coxsackieviruses have relatively small genomes made of single-stranded RNA. The viral RNA encodes for about a dozen proteins, one of which is the enzyme responsible for making new copies of the virus.

In earlier work published in Proceedings of the National Academy of Sciences, Peersen and co-authors had discovered the exact chemical steps by which the RNA-dependent RNA polymerase copies the virus genome. During this process, the polymerase makes three or four random mistakes that allow the virus to continually evolve and survive.

The researchers have built upon this breakthrough to design a way to “outsmart Mother Nature,” Peersen said, by re-engineering one key part of the polymerase enzyme so the virus can’t grow very rapidly in a cell. Their technology could lead to what’s called a live-attenuated vaccine. Such vaccines contain a weakened version of the virus, purposely injected to trigger the production of antibodies and create immunity rather than cause disease.

The classic live-attenuated vaccine is for poliovirus, invented by Jonas Salk in the mid 20th century. But the process isn’t foolproof. The simple RNA genome lets viruses make millions of copies within days, and many of those copies contain “mistakes,” or mutations, that can slightly alter the vaccine virus and restore its ability to cause disease. That’s one reason why RNA viruses are hard to eradicate and why some people get vaccine-induced sickness.

To minimize the chances of a vaccine-induced infection, the researchers changed one specific amino acid in the RNA polymerase (a phenylalanine) to another amino acid (a tryptophan).

First, they showed that the tryptophan caused the polymerase to make fewer mutations, and this in turn reduced its ability to replicate and cause disease. Second, even if the virus tries to mutate the change away, then it can no longer replicate, so the virus self-destructs – which is why the researchers call their modification a “genetic poison pill.”

The demonstration of this poison pill in the coxsackievirus B3 could theoretically translate to other positive-sense RNA viruses, including those linked to asthma and to foot-and-mouth disease that is a major animal health concern in Europe and South America.

And now, to see if it works

This past spring, Peersen received a new National Institutes of Health grant to continue testing the genetic modification in live animals, in partnership with researchers at the University of Wisconsin.

“We think it’s going to work, but we have to show that it will,” Peersen said. “Trying to outsmart Mother Nature is pretty daunting, especially in these viruses. There are ways that things happen you never anticipate, and the virus finds a way to survive.”