The study reveals that administration of interleukin-35 (a protein made by immune cells) to mice with type 1 diabetes, reverses or cures the disease by maintaining a normal blood glucose level and the immune tolerance.

Type 1 diabetes (T1D) is a chronic disease, which for the patients leads to a life-long dependence of daily injections of insulin. In Sweden approximately 2 new cases of the disease are diagnosed every day. Insulin is a hormone, which is produced by the beta cells in the pancreas. Insulin is required to prevent a harmful rise in the blood glucose level.

The exact cause of T1D is not yet known, however, it is considered as an autoimmune disease. A condition that occurs when our own immune system by mistake attack and destroy healthy cells. In T1D, an infection and/or unknown factors probably triggers the immune cell attack, which ultimately leads to an insufficient insulin production. 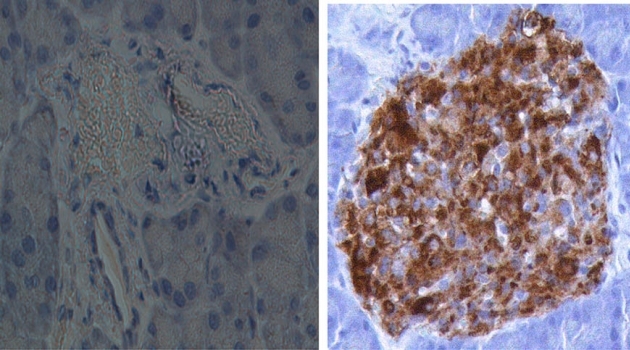 “This suggests that the good guys have gone bad in early development of Type 1 diabetes and therefore our immune cells destroy the beta cell”, says Dr. Kailash Singh.

Furthermore, the concentration of IL-35 was lower in T1D patients compared to healthy individuals. These findings may suggest that IL-35 could play a crucial role in human T1D. In addition, the researchers have found a novel mechanism that explains how the immune regulatory T cells are changing their destiny under a T1D condition.

Professor Sandler’s research team tested whether or not IL-35 could also suppress development of T1D and reverse established T1D. To induce T1D in mice they injected a chemical compound called streptozotocin. These mice developed signs of TID and increasing blood glucose levels similar as in human T1D. IL-35 injections given after disease induction prevented from development of T1D. Strikingly, IL-35 injections to mice, which were diabetic for two consecutive days, normalized blood glucose concentrations.

The research team also successfully investigated IL-35 in another model of T1D called non-obese diabetic mouse (NOD). The interruption of IL-35 treatment did not result in return of diabetes in any of the mouse models.

The findings encourage further research on the use of IL-35 for treatment of T1D and offer new clues as to why immune regulatory T cells fail in counteracting T1D.

“To the best of our knowledge, we are the first to show that IL-35 can reverse established Type 1 diabetes in two different mouse models and that the concentration of the particular cytokine is lower in Type 1 diabetes patients than in healthy individuals. Also, we are providing an insight into a novel mechanism: how immune regulatory T cells change their fate under autoimmune conditions”, says Kailash Singh.