Molly Campbell is a senior science writer at Technology Networks. She holds a first-class honors degree in neuroscience. In 2021 Molly was shortlisted for the Women in Journalism Georgina Henry Award.
Learn about our editorial policies
Credit: Mufid Majnun on Unsplash.
Read time:

Complete the form below to unlock access to this Audio Article: "Reactions to AstraZeneca Statement on Vaccine Effectiveness"

Pascal Soriot, the executive director and chief executive officer of AstraZeneca, recently featured on the BBC Radio 4's The Today Program. In the interview, he was pressed to respond to the notion of mRNA vaccines – such as the Pfizer–BioNTech COVID-19 vaccine – becoming the "future" of vaccinology.

In his response, Soriot suggested that the Oxford–AstraZeneca vaccine (Vaxzevria) may offer a longer-lasting form of immunity against the virus, compared to other vaccines, by inducing T-cell responses. He also implied that the increasing rates of hospitalization and death from COVID-19 across mainland Europe may be attributable to the reduced uptake of the Oxford–AstraZeneca COVID-19 vaccine in these countries when compared to the UK.

"It's really interesting. When you look at the UK, there was a big peak of infections, but not so many hospitalizations relative to Europe. In the UK, this vaccine was used to vaccinate older people. Whereas in Europe, initially, people thought the vaccine doesn't work in older people," Soriot said.

Soriot is referring to the decision made earlier this year by several EU countries, including Germany, to advise against older people receiving Vaxzevria. In many cases this decision was revised based on subsequent guidance from the European Medicines Agency (EMA).

"What I'm saying, is that T cells do matter, and in particular, as it relates to the durability of the response, especially in older people," Soriot said. “This vaccine has been shown to stimulate T cells to a higher degree in older people […] There's no proof of anything, we don't know. But we need more data to analyze this and get the answer."

The scientific community has responded to Soriot's statement. The general consensus appears to be that, while it's plausible the AstraZeneca vaccine could trigger a stronger T-cell immune response compared to other vaccines, currently, there is not sufficient data to state this as fact. Even if it was the case, there are many other factors that could contribute to varying infection rates across different countries, experts argue.

What are T cells, and why are they important?

To understand the role T cells play in long-term immunity, let's review some immune system basics. The immune system can be broadly classified into two separate components: adaptive and innate. The innate immune system responds quickly when it encounters foreign materials, but the response is not very specific. In comparison, the adaptive immune system is slower to respond but elicits a more targeted, specific response. 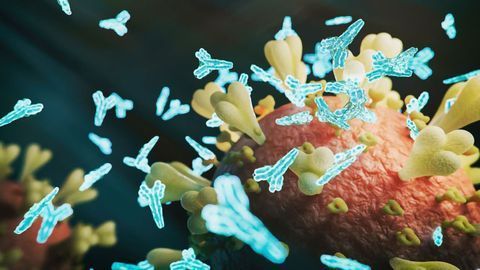 END_OF_DOCUMENT_TOKEN_TO_BE_REPLACED

The adaptive immune system can be further subdivided into humoral and cellular immunity. "Humoral immunity refers to the immunity found in the blood, or specifically, serum, the non-cellular part of the blood – i.e., [it refers] to antibodies," Dr. Peter English, consultant in public health and health protection, told the Science Media Centre. Cellular immunity, on the other hand, is mediated by T cells.

"The antibody response is what drives the immediate reaction or defence of the body when you are attacked by the virus," Soriot told BBC Radio 4. "The T-cell response takes a little longer to come in. But it's actually more durable, it lasts longer, and the body remembers that [for] longer. So, you see, everybody's focused on antibodies, but [with] antibodies, you see them decline over time."

Measuring cellular responses in a laboratory environment is more challenging than measuring antibody responses. This is why we typically see more reports of antibody levels post-vaccination or after a disease, and less reports on cellular immunity," English said.

While B cells are largely recognized for producing antibodies, there are a number of different T cells that are important for adaptive immunity. "They include, for example, the killer T cells, whose role is to kill cells which are misbehaving," English said. "They are also involved with stimulating some B cells to become long-lived memory B-cells; cells which circulate in the bloodstream or live in the bone marrow, and which can very rapidly pump out large quantities of antibody if the virus is (or, more accurately, the relevant antigens are) detected in the future," he added.

The severity of illness that an individual experiences when infected by a pathogen – like SARS-CoV-2 – can therefore depend on that individual's T-cell response.

The Vaxzevria vaccine and T-cell response

Different vaccines are capable of stimulating different parts of the immune system. Is there any evidence that suggests the Vaxzevria triggers a stronger T-cell response, compared to other COVID-19 vaccines? Matthew Snape is an associate professor in general paediatrics and vaccinology at the Oxford Vaccine Group, the University of Oxford Department of Paediatrics and the NIHR Oxford Biomedical Research Council. He is leading the Oxford Vaccine Group’s Com-Cov vaccine trial, which is comparing the use of different combinations of approved COVID-19 vaccines for first and second immunization doses.

“Useful data regarding T-cell responses come from the Com-Cov study, a randomized trial in which we compared antibody and T-cell responses in those receiving ‘standard’ or ‘mixed’ schedules of the COVID-19 vaccines manufactured by Pfizer and AstraZeneca," said Snape. The trial group recently published a paper in The Lancet, outlining key findings from the trial thus far.

Snape and colleagues are following up on the Com-Cov trial's initial findings to explore how T-cell responses compare six months after the second vaccine dose. Right now, it is not possible to state for certain whether the Vaxzevria vaccine is better than the other available vaccines, emphasized Dr. Lance Turtle, senior clinical lecturer in infectious diseases at the University of Liverpool.

Making direct comparisons between the COVID-19 vaccines, and obtaining high quality data, is difficult. "The different vaccines have been rolled out at different times and in different groups of people with different underlying risks of severe disease, making direct comparison between them very difficult," said Eleanor Riley, professor of immunology and infectious disease at the University of Edinburgh. This is further complicated by the fact that the virus has evolved since the first vaccines were deployed and booster shots are being administered in different parts of the globe. "Any differences between the types of vaccine will be even harder to detect," added Riley.

Infection rate, hospitalization rate and death rate variation across countries could be attributed to a number of different factors. This includes how many people are vaccinated, when they were vaccinated, variant prevalence and the general age of the population, for example. Making comparisons between countries may not be productive, argues Turtle: "Drawing comparisons between countries presents many difficulties, and is very likely to lead to conclusions which are not reliable."

"Even if you have had COVID-19, you should still have all doses offered, as the body’s response is even better still. It is much less important to worry about which vaccine you get. The best COVID-19 vaccine you can get is the one you can get the soonest," Turtle concluded.
Related Topic Pages
The COVID-19 Pandemic
Infectious Diseases
The Immune System
Vaccine Design and Testing
Meet the Author