Ribosome-based Treatments: A Sought After Therapy Option for Orphan Diseases?

Ribosome-based Treatments: A Sought After Therapy Option for Orphan Diseases?

Complete the form below and we will email you a PDF version of "Ribosome-based Treatments: A Sought After Therapy Option for Orphan Diseases?"

The biopharmaceutical company Urania Therapeutics, a spin-off company from the Institute of Genetics and Molecular and Cellular Biology, is researching novel therapy options for an array of monogenic diseases. Their unique approach involves targeting the decoding center of the human ribosome to restore the production of functional proteins using "readthrough compounds".

Recently, Urania Therapeutics announced that it has successfully raised €3.53M ($3.89M) in seed funding to unlock the therapeutic potential of ribosome-based treatments. We spoke with Jean-Paul Renaud, President and CSO of Urania Therapeutics, to learn more about the mechanisms of readthrough compounds and how the company hopes to provide treatment solutions for orphan diseases.

Molly Campbell (MC) What are "readthrough" compounds, and how do they work? What conditions could they potentially treat? 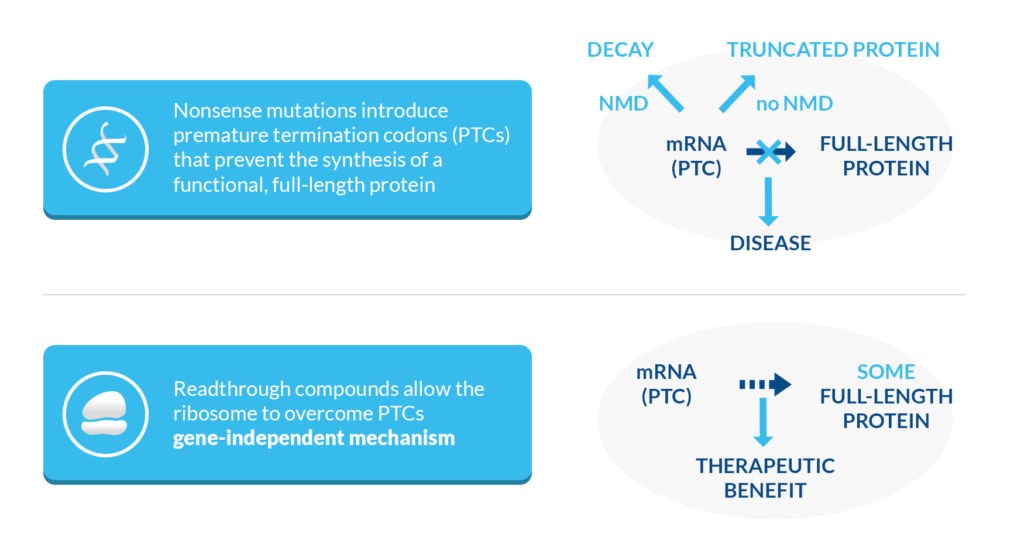 In both cases, the absence of full-length protein is at the origin of the disease. Moreover, in some cases, the truncated protein is toxic due to a deleterious gain-of-function or dominant-negative activity.

Readthrough compounds helps the ribosome overcome the premature stop codon, thus restoring – partially – the synthesis of a full-length protein, from which a therapeutic benefit is expected.

Readthough compounds allow the recognition of a premature stop codon by a near-cognate tRNA instead of the termination factor, resulting in the elongation of the protein until the normal stop codon.

The amino acid incorporated during readthrough may not be the one normally encoded. However, as long as the substituted amino acid does not carry out an essential function (for example, as a critical active site residue), the resulting protein should exhibit a normal (or at least partial) activity.

The amount of function restored will be proportional to the level of readthrough obtained (i.e. the amount of full-length protein synthesized), but the potential therapeutic benefit depends on the nature of the protein. For instance, if the protein has a structural role, a few percent may not be sufficient to improve the patient's condition. On the other hand, if the protein is an enzyme, a channel, a receptor, or a transcription factor, even low levels of the full-length protein (~1-10% of the normal amount) could bring a therapeutic benefit.

JPR: Gene therapy and genome-editing techniques are not yet mature in terms of reproducible efficacy and of safety; thus, novel solutions are still required for the treatment of monogenic diseases. This is already the case with approaches such as exon skipping (e.g. Exondys 51 in the case of duchenne muscular dystrophy (DMD), even though the therapeutic benefit remains to be proven in patients), protein potentiator (e.g. ivacaftor in the case of cystic fibrosis), protein chaperone (e.g. lumacaftor in the case of cystic fibrosis), or enzyme replacement therapy (e.g. Cerezyme in the case of Type 1 Gaucher disease).

MC: Why is it advantageous that readthrough compounds target a gene-independent mechanism

JPR: Readthrough compounds act at the ribosome decoding center, whatever the nature of the mRNA (since they just interfere with the recognition of stop codons), and thus in a gene-independent manner. This is advantageous since a readthrough drug could be repurposed for multiple therapeutic indications – provided clinical trials are conducted for each new indication to probe therapeutic efficacy.

Most monogenic diseases are orphan diseases (no treatment available), due to the huge cost of developing a new drug in relation to the patient population. The readthrough approach especially brings hope in the case of ultra-rare diseases for which there is little hope that any pharmaceutical companies will start an R&D program, in spite of the orphan drug designation incentive.

MC: How will the seed funding help Urania Therapeutics to unlock the therapeutic potential of ribosome-based treatments?

JPR: The seed funding will allow Urania Therapeutics to follow (for the first time) a structure-based drug design (SBDD) approach to develop safe readthrough compounds. This rational SBDD approach is based on a unique know-how in eukaryotic ribosome crystallography developed at IGBMC by Marat Yusupov and Gulnara Yusupova, world-renowned experts in the field. Urania has obtained an exclusive licence on this know-how through the Technology Transfer Office Conectus.

MC: What key challenges exist in the development of ribosome-based therapies?

Another challenge is the nucleotide sequence environment of the premature stop codon, which has been shown to influence the extent of readthrough. Thus, Urania Therapeutics aims to develop a set of readthrough drugs (instead of a single one) in order to optimally treat each patient according to the specific context of the premature stop codon carried by the patient (precision medicine).