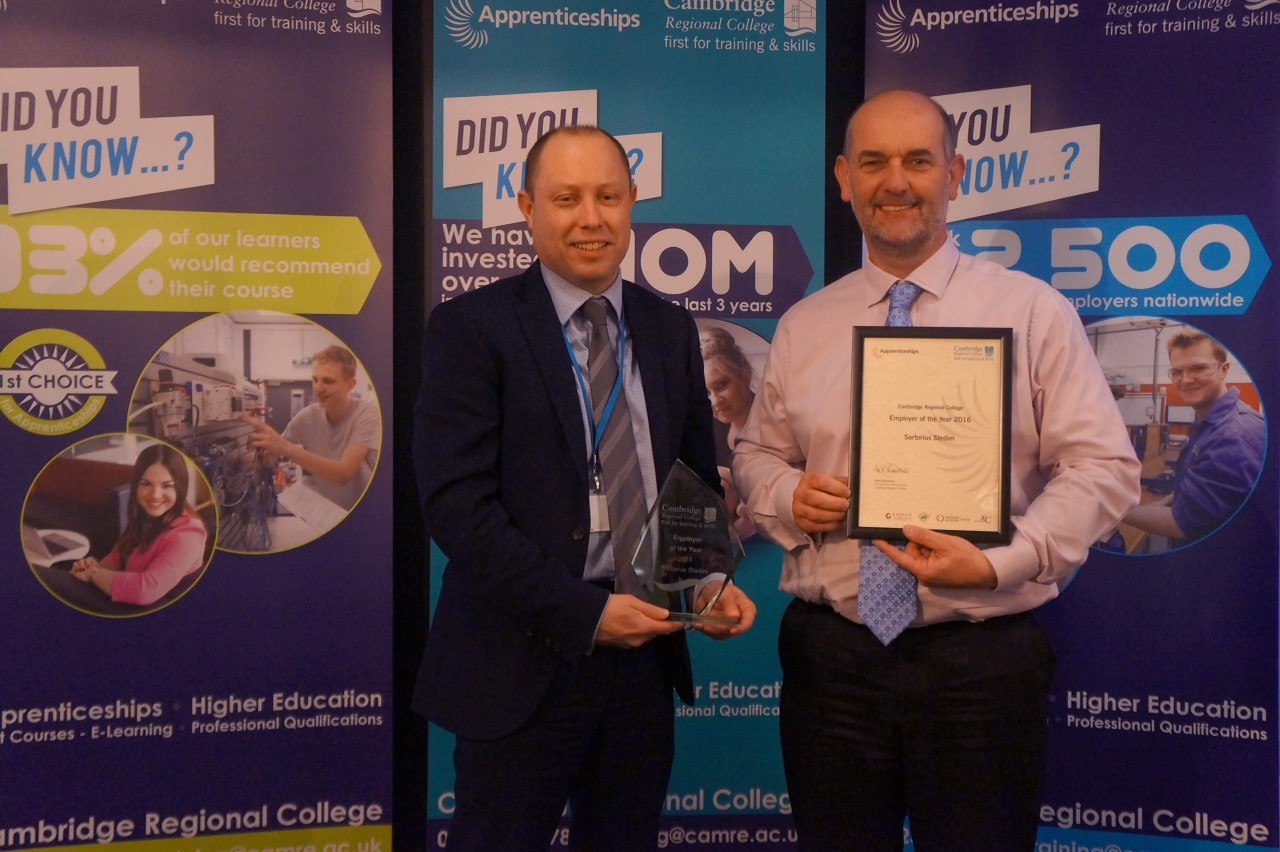 Sartorius Stedim Biotech (SSB) is delighted to announce that its Royston site has won two prestigious awards at the Annual Cambridge Regional College Apprenticeship Dinner. The company was chosen as category winners for the Science, Technology, Engineering and Mathematics (STEM) Apprenticeships and then went on to win “Overall Employer of the Year”. These awards recognize Sartorius in Royston as an excellent, forward-thinking employer of apprentices in the UK’s Eastern region high-tech sector.

Sartorius’ Royston site (formerly TAP Biosystems) was chosen by the judging panel because they considered it to have an outstanding commitment to both the college and to on-the-job training of its apprentices. For the “Overall Apprenticeship Employer of the Year”, the company was selected from over 800 local employers that offer apprenticeships with the college.

Sartorius Royston has been running its apprenticeship scheme since 2013 and has taken on six apprentices during this time.   As part of their three-year apprenticeship, the trainees work in a modern, open-plan environment and are involved in producing high value automated systems. They are rotated every three months in the different manufacturing, engineering and service departments to enable them to experience which area they would like to work in, should they be successful in attaining a full time position when their apprenticeship is completed.

As well as receiving on the job training, the apprentices are fully funded to attend Cambridge Regional College for one day per week to study for qualifications including a BTEC in Mechanical Engineering and an NVQ in Commissioning and Installation.

Neal Kidman, Apprenticeship Programme Manager, received the Best Stem Apprenticeship and Overall Employer of the Year Awards on behalf of the company at a special Cambridge Regional College Dinner on 16 March 2016 in Cambridge.  He thanked the apprentices for their commitment and the college for their continued support with Sartorius Royston’s apprenticeship programme.

Assistant Principal for Employer Engagement at Cambridge Regional College, Paul Skitt stated: “We are delighted to award Sartorius Stedim Biotech our overall Employer of the Year Award for 2016. They have shown an outstanding commitment to Apprenticeships over the past three years, working closely with Cambridge Regional College to help their apprentices achieve at an extremely high level. We congratulate them whole-heartedly on winning this well-deserved award.”

Neal Kidman at Sartorius Stedim Biotech commented: “We’re proud to be independently recognised as performing to a very high standard with our apprenticeships. It’s a great boost to receive these awards and a testament to the commitment our apprentices and their managers have put in since we started the scheme.”

Kidman added: “To meet increasing demand from the booming biotech sector, we need to grow our team of highly skilled engineers. By offering STEM apprenticeship schemes we can transfer our expertise and continue to build niche skills within the next generation of employees.”

Top 5 Considerations When Making Decisions for a More Robust Harvest