Testosterone: Why the Incidence of Multiple Sclerosis is Lower in Men

Testosterone: Why the Incidence of Multiple Sclerosis is Lower in Men

Complete the form below and we will email you a PDF version of "Testosterone: Why the Incidence of Multiple Sclerosis is Lower in Men "

Researchers have discovered why men are much less likely to develop multiple sclerosis (MS) — high levels of testosterone. Testosterone triggers production of the cytokine IL-33 protecting them from the disease. The team’s findings were published today in the Proceedings of the National Academy of Sciences.1

Senior author, Prof. Melissa Brown, from Northwestern University, commented on the significance of their findings in a recent press release: "Because testosterone levels are seven-to-eight times lower in adult women compared to men, we speculate there are insufficient levels in females to activate this protective pathway …But we showed we can activate the pathway with the guardian molecule, IL-33."

The scientists used a mouse model of MS, experimental autoimmune encephalomyelitis (EAE), to show that when female mice were administered IL-33, their disease symptoms were eliminated.

MS affects >2.3 million individuals worldwide. Most people affected by MS are diagnosed between the ages of 20–50 years.2 MS is a neurological condition that affects the central nervous system. More specifically, it is caused by the individual’s immune system attacking the myelin sheath that surrounds nerve fibers. Damage to this protective sheath results in the interruption of normal signal conduction as nerve axons are no longer adequately insulated. Symptoms can include; vision loss, dizziness, muscle spasms and stiffness, and fatique.3

MS is at least two-to-three times more common in females compared to males.2 Previous research has shown that pregnancy has a temporary beneficial effect on MS activity, indicating that hormones can influence susceptibility of the disease. Limited studies have shown that treating male MS patients with testosterone can improve MS outcomes,4,5 however, short-term testosterone therapy is not a viable treatment for either sex due to associated adverse effects.

"This [research] suggests a mechanism for the reduced incidence of multiple sclerosis and other autoimmune diseases in males compared to females …These findings could lead to an entirely new kind of therapy for MS, which we greatly need." Explained Brown.

The researchers demonstrated that testosterone stimulates mast cells to produce IL-33 and that IL-33 triggers a chemical cascade that prevents the production of Th17 cells in male mice. Th17 cells are directly responsible for nerve demyelination. Lower levels of testosterone in female mice appear to lead to a lack of IL-33. The researchers noted that female mice, produced more Th17 cells than males, leading to a more severe phenotype, however by administering IL-33 they were able to reverse the damaging effects in female mice. 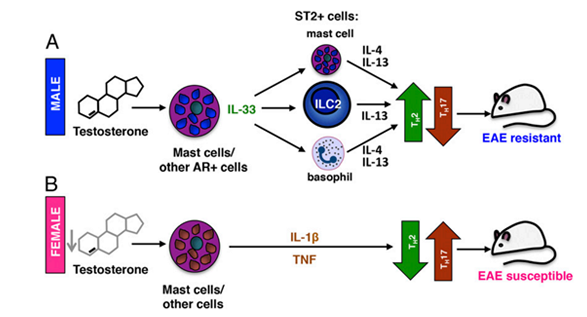 Brown explained that the identification of hormone driven mechanisms, such as the testosterone-driven pathway outlined here, could have important therapeutic implications: "Our findings have identified new and more specific cellular and molecular targets for immune intervention that we hope will lead to better therapies that leave most of the immune system intact," Brown said. "This testosterone-driven protective pathway should also be studied in other female-biased autoimmune diseases."
References