“Our results indicate that a new therapy may be developed to prevent the development of pulmonary fibrosis associated with ageing,” says CNIO’s Maria Blasco, principal investigator of the study

Lung tissue of patients with pulmonary fibrosis does not regenerate because the cells involved in lung generation have damaged telomeres, the ends of the chromosomes. The new study describes a gene therapy that activates the enzyme that repairs telomeres.

Idiopathic pulmonary fibrosis is a potentially lethal disease for which there is currently no cure and that is associated with certain mutations or advanced age. The Telomeres and Telomerase Group at the Spanish National Cancer Research Centre (CNIO) had previously developed an effective therapy for mice with fibrosis caused by genetic defects. Now they show that the same therapy can successfully be used to treat mice with age-related fibrosis.

“With respect to humans, our results indicate that it may be possible to devise a treatment to prevent the development of pulmonary fibrosis associated with ageing,” says Maria Blasco, principal investigator of the study.

The treatment tested in mice is a gene therapy that activates the production of telomerase in the body. Telomerase is an enzyme that repairs the telomeres at the end of chromosomes. According to Blasco, this therapy was highly effective in animal models and no side effects were observed.

Pulmonary fibrosis affects around 8,000 people in Spain. In this disease, the lung tissue becomes stiff and scarred, and patients develop progressive shortness of breath. It is thought to be caused by a combination of genetic and environmental factors. Exposure to toxic substances plays an important role, but for the disease to manifest itself the patient must be of advanced age or have an underlying genetic condition.

The CNIO team had already shown in previous studies that the genetic factors are associated with telomere dysfunction. Telomeres are structures that, like “end caps”, protect the ends of chromosomes in all cells.

Back in 2015, the team generated an animal model for pulmonary fibrosis – a mouse that, among other characteristics, lacked the telomerase gene. In this mouse model, alveolar type II cells or type II pneumocytes – important for lung tissue regeneration – eventually die as a result of telomere dysfunction. As a consequence, the mice develop aggressive pulmonary fibrosis because the respiratory epithelium cannot renew itself periodically; this periodic regeneration keeps the tissue healthy and free from possible damage caused by harmful airborne substances.

The mouse model that lacks the telomerase gene faithfully mimics the human disease caused by mutations affecting the telomeres. However, specific mutations are found in relatively few pulmonary fibrosis cases. In the vast majority of patients, nothing points to a specific mutation, but all patients have something in common: an advanced age.

Indeed, telomeres can become defective through the mere process of ageing. The team led by Blanco have done ground-breaking research on telomeres and the ageing process. Telomeres are protein structures that cap the ends of chromosomes; they shorten with every cell division. After many rounds of cell division over the lifetime of an individual, they become so short that they can no longer protect the chromosomes. The cells interpret this as an error and stop dividing so that the tissue cannot regenerate anymore.

In the paper now published, the researchers show that telomere dysfunction associated with ageing occurs in alveolar type II cells, which play a primary role in lung tissue regeneration. The team have thus found the molecular basis of the link between pulmonary fibrosis and ageing, a link that is clearly seen in the clinical setting.

The new study describes the effects of ageing on lung tissue in detail. One such effect is that alveolar type II cells stop doing their job.

In addition to regenerating tissue, these cells produce and release a lipid-protein complex called pulmonary surfactant that facilitates the mechanical work done by the lungs. “Lung tissue must expand when we breathe in, six to ten times per minute, which means a great deal of physical effort. Pulmonary surfactant plays an important role in lubricating lung tissue, retaining its elasticity, and reducing the amount of work required to expand and contract it. If type II pneumocytes fail to regenerate, the surfactant is not produced, which results in lung stiffness and fibrosis,” says Jesús Pérez-Gil of the Complutense University of Madrid, who participated in the study and whose team are experts in this field.

“We have observed a very clear relation between telomere status in type II pneumocytes, pulmonary surfactant production and fibrosis development in animals,” Pérez-Gil adds. “Here we address the effects on telomeres at the molecular level, biological and physical changes in cells and tissues, and the consequences for the health of the animal, the whole organism.”, indicates Sergio Piñeiro, first author of the study.

A therapy for all types of fibrosis

In 2018, the CNIO group developed a gene therapy that reversed pulmonary fibrosis in mice lacking the telomerase gene. This therapy was based on activating telomerase expression temporarily. A virus used as a telomerase gene carrier was injected intravenously into the mice. The effect – alveolar type II cells with long telomeres – was temporary, but lung tissue regeneration was successfully induced.

The same therapy was now used in aging mice. And it worked in them too. “The telomerase-activating gene therapy prevented the development of fibrosis in all mice, including the ones without genetic alterations that only underwent physiological ageing,” Blasco explains.

This extends the possibility of a cure for pulmonary fibrosis to virtually all cases of fibrosis, as the researchers conclude in their paper: “These findings contribute to a better understanding of the importance of [the telomerase gene] as a potential target for future therapeutic approaches in idiopathic pulmonary fibrosis.”

The study was funded by the Spanish Ministry of Science, Innovation and Universities, the Carlos III Health Institute, the Community of Madrid, the Botín Foundation and Banco Santander through Santander Universidades, and World Cancer Research. 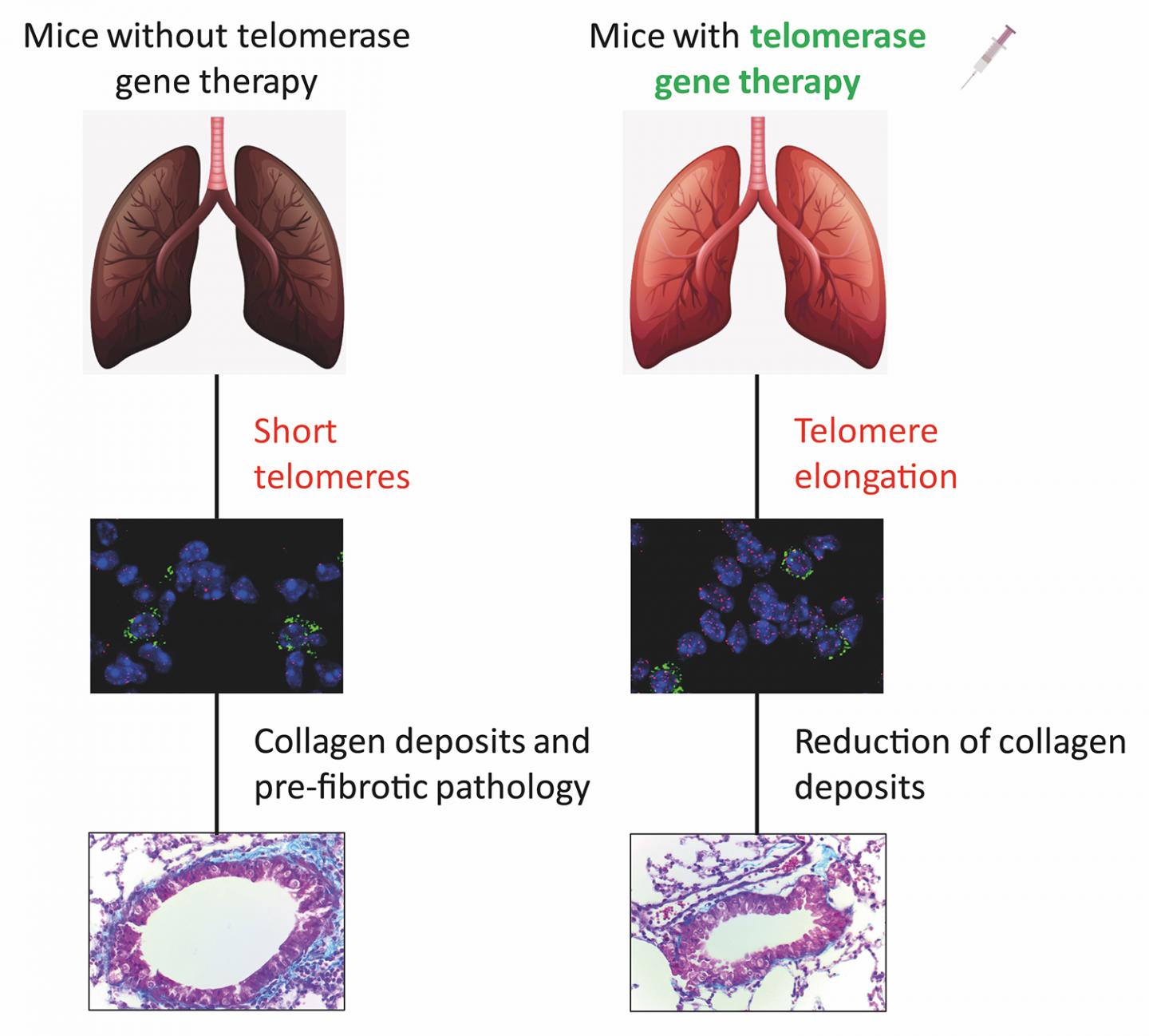 Development of the initial stages of pulmonary fibrosis associated with ageing in non-treated mice (left), that can be prevented in mice treated with the telomerase gene therapy (right). Credit: CNIO.