Complete the form below to unlock access to this Audio Article: "Vital Genes in Fat Production Found"

Harvard Stem Cell Institute (HSCI) scientists have found a way to both make more energy-burning human brown fat cells and make the cells themselves more active, a discovery that could have therapeutic potential for diabetes, obesity, and other metabolic diseases. 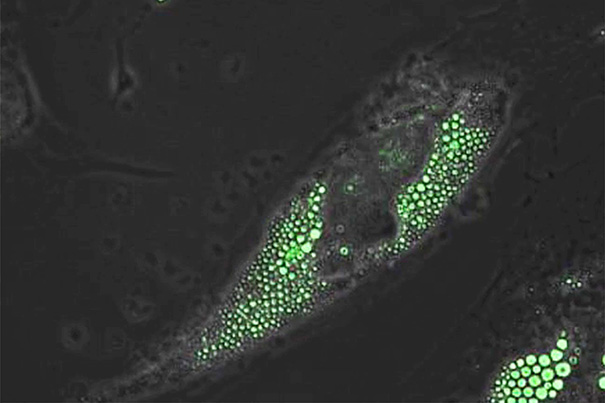 The research team, made up of scientists at Harvard University and at Harvard-affiliated Joslin Diabetes Center and led by HSCI principal faculty member Yu-Hua Tseng, determined that the amount of energy burned varies from person to person and from cell to cell. As it turns out, said Tseng, “Not all fat cells are created equal.”

The researchers determined that a whole suite of genes help determine how much UCP1 a brown fat cell will produce once it has matured, and those genes control UCP1 production in different ways. Some, Tseng said, act like on/off switches: When the gene is on, a brown fat cell can make the energy-burning protein, and when it is turned off, it doesn’t. Other genes acted more like a light dimmer that adjusts or fine tunes the amount of UPC1 created.

Knowing which genes control UCP1 should help scientists develop therapies. “We could take fat samples from patients undergoing liposuction and we could purify this specific population of progenitor cells,” keeping only those that would eventually make highly active brown fat cells, “and let them differentiate into brown cells, and then get them back into the individual,” Tseng said. Once reintroduced to the patient’s body, the additional brown fat cells would burn energy from the existing white fat cells.

Tseng hopes this technique could eventually replace invasive procedures such as liposuction and gastric bypass surgery. While liposuction removes white fat cells, it does not make the brown fat cells more efficient. And gastric bypass, though life-saving, can be risky. Tseng believes cell therapy would be “much safer and much less invasive.”

Controlling the genes might allow scientists to make mediocre brown fat cells work better. This could potentially allow the brown fat cells to remove the high numbers of circulating glucose associated with type 2 diabetes and circulating fatty acids and triglycerides that are the hallmark of metabolic syndrome.

“By further understanding how adipose cells become thermogenically active, meaning they use energy to produce heat and thus burn calories, we may discover novel therapeutics for the treatment of obesity and metabolic disease,” said Chad Cowan, an HSCI principal faculty member who, among other things, also studies the therapeutic potential of brown fat cells.

In 2014, Cowan identified two drugs with the potential to convert stem cells that make white fat into those that would make brown. “This latest study gives us new tools and targets to use in the battle against obesity,” Cowan said.