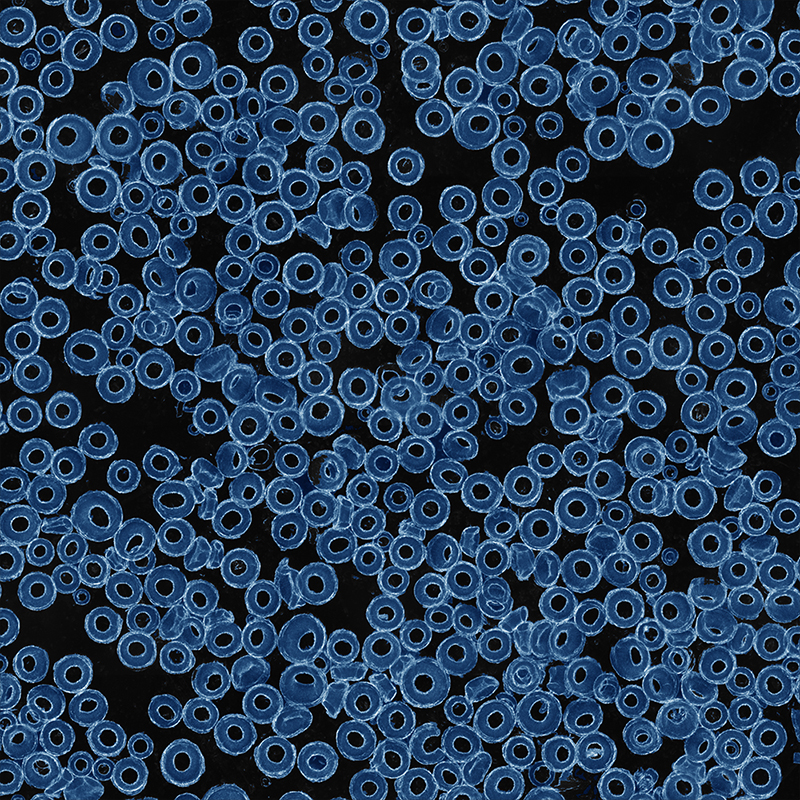 Some of the world’s most important discoveries – penicillin, vulcanized rubber and Velcro, to name a few – were made by accident. In fact, it’s been said that upward of half of all scientific discoveries are by chance.

Add vortex ring freezing to that long list of “accidents.”

Duo An, a doctoral student in the labs of both professor Dan Luo and assistant professor Minglin Ma, in the Department of Biological and Environmental Engineering, was an undergraduate from China doing an internship at Cornell when he stumbled upon a phenomenon that has the potential to greatly improve cell-free protein production and cell delivery, particularly for Type 1 diabetes patients.

A group headed by Luo and Ma has published the paper, “Mass production of shaped particles through vortex ring freezing,” which was released online Aug. 4 in Nature Communications and which An is lead author.

Vortex rings are ubiquitous in nature – a mushroom cloud of smoke is one example – and the ring’s evolution exhibits a rich spectrum of complicated geometries, from spherical to teardrop to toroidal (doughnut-shaped). The researchers used these features to control and mass produce inorganic and organic particles via an electrospraying process, whereby a multitude of vortex ring-derived particles (VRPs) can be produced, then frozen at precise time points. The group reported they could produce 15,000 rings per minute via electrospraying.

They found controlling the shape and speed of the spray, as well as the speed of the chemical reaction, can yield different structures.

“We can tune both of these timescales, and control at which stage we can freeze the structure, to get the results we want,” An said.

It wasn’t until two years later, while working in Ma’s lab, that he recalled the vortex rings he’d created and wondered if that concept could be applied to Ma’s work with microcapsules and cell therapy. The Ma lab focuses on cell delivery for Type 1 diabetes patients.

Ma admitted that the concept of using a doughnut-shaped encapsulation hadn’t occurred to him, but made perfect sense.

“We knew the concept that a doughnut shape is better, but we never thought of making it until we saw it [from An],” Ma said.

An advantage of the doughnut-shape encapsulation over a spherical-shaped one is shorter diffusion distance – the distance the encapsulated particle must travel to escape the capsule – while at the same time maintaining a relatively large surface area.

This concept could pave the way for other as-yet-unknown applications of vortex ring freezing, according to Luo.

“Our hope is that this type of material in these shapes can be used much more extensively in other labs for whatever they’re trying to do,” he said. “There is a whole field devoted to just particles, but by default, they are all thinking in terms of spherical particles. Hopefully, this will add to that field of study.”

Ma, who earlier this year won a Hartwell Individual Biomedical Research Award for his work on juvenile diabetes, cited the work of collaborators Ashim Datta, professor of biological and environmental engineering, and Paul Steen, the Maxwell M. Upson Professor of Engineering in the Robert Frederick Smith School of Chemical and Biomedical Engineering. Datta’s lab did the simulation work, and Steen’s group provided key theoretical input.

“Their contributions put this work on much more solid ground,” Ma said. “We now better understand the mechanism behind it, and can more purposefully design these particles in the future.”