Will COVID-19 Vaccines Need To Be Evaluated and Adapted Regularly?

Will COVID-19 Vaccines Need To Be Evaluated and Adapted Regularly?

Complete the form below and we will email you a PDF version of "Will COVID-19 Vaccines Need To Be Evaluated and Adapted Regularly?"

Complete the form below to unlock access to this Audio Article: "Will COVID-19 Vaccines Need To Be Evaluated and Adapted Regularly?"

Influenza vaccines need to be evaluated every year to ensure they remain effective against new influenza viruses. Will the same apply to COVID-19 vaccines? In order to gauge whether and to what extent this may be necessary, a team of researchers from Charité – Universitätsmedizin Berlin compared the evolution of endemic 'common cold' coronaviruses with that of influenza viruses. The researchers predict that, while the pandemic is ongoing, vaccines will need to undergo regular updates. A few years into the post-pandemic period, however, vaccines are likely to remain effective for longer. This study has been published in Virus Evolution.

Influenza viruses are masters at evading the human immune system. They undergo such rapid changes that antibodies produced by the immune system in response to a previous infection or vaccination become unable to neutralize them. This is why the complex task of evaluating and updating the seasonal influenza vaccine has to be repeated every year. Mutations within SARS-CoV-2 have already produced a number of variants, some of which (such as the South African variant) partially evade the body’s immune response. As a result, some vaccine manufacturers have already started to develop new versions of their vaccines. What does this mean for the future? Will COVID-19 vaccines mirror influenza vaccines in requiring regular updates?

In order to gauge whether, over the long term, SARS-CoV-2 is likely to demonstrate an immune evasion capability on par with that of influenza viruses, Charité virologists have studied the genetic evolution of the four currently known ‘common cold’ coronaviruses. These relatively harmless coronaviruses are known to be responsible for approximately 10 percent of common colds in the world and have been in circulation in humans significantly longer than SARS-CoV-2. Just like SARS-CoV-2, they enter human cells using the ‘spike protein’, a surface protein which gives the virus its characteristic crown-like appearance (and name). The spike protein also forms the target of all current COVID-19 vaccines.

For their study, the researchers focused on the two longest-known coronaviruses (termed 229E and OC43), tracing changes in the spike gene approximately 40 years into the past. The researchers started by comparing sequences from a range of old samples which had been deposited in a genetic sequence data bank. Based on the mutations which had emerged over time, they then produced phylogenetic trees for both coronaviruses. The researchers compared their findings with the phylogenetic tree of H3N2, an influenza subtype which is particularly effective at evading the human immune response.

The researchers’ calculations revealed one feature which was common to the phylogenetic reconstructions of both the coronaviruses and the influenza virus: all three had a pronounced ladder-like shape. “An asymmetrical tree of this kind likely results from the repeated replacement of one circulating virus variant by another which carried a fitness advantage,” explains the study’s first author, Dr. Wendy K. Jó from Charité’s Institute of Virology. “This is evidence of ‘antigenic drift’, a continuous process involving changes to surface structures which enable viruses to evade the human immune response. It means that these endemic coronaviruses also evade the immune system, just like the influenza virus. However, one also has to look at the speed with which this evolutionary adaptation happens.” 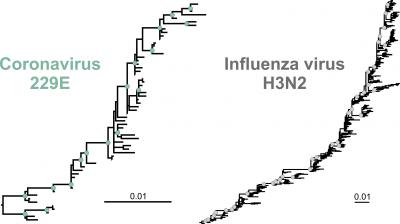 For this step, the researchers determined the three viruses’ evolutionary rates. While the influenza virus accumulated 25 mutations per 10,000 nucleotides (genetic building blocks) per year, the coronaviruses accumulated approximately 6 such mutations in the same timeframe. The rate of change of the endemic coronaviruses was therefore four times slower than that of the influenza virus. “As far as SARS-CoV-2 is concerned, this is good news,” summarizes Prof. Dr. Christian Drosten, Director of the Institute of Virology and a researcher at the German Center for Infection Research (DZIF).

SARS-CoV-2 is currently estimated to change at a rate of approximately 10 mutations per 10,000 nucleotides per year, meaning the speed at which it evolves is substantially higher than that of the endemic coronaviruses. “This rapid genetic change in SARS-CoV-2 is reflected in the emergence of numerous virus variants across the globe,” explains study lead Prof. Dr. Jan Felix Drexler, a researcher at both the Institute of Virology and the DZIF. “This, however, is likely due to the high rates of infection seen during the pandemic. When infection numbers are so high, a virus is able to evolve more rapidly. Based on the rates of evolution seen in the endemic common cold coronaviruses, we expect that SARS-CoV-2 will start to change more slowly once infections start to die down – meaning once a large proportion of the global population has developed immunity either as a result of infection or through vaccination. We expect therefore that COVID-19 vaccines will need to be monitored regularly throughout the pandemic and updated where necessary. Once the situation has stabilized, vaccines are likely to remain effective for longer.”