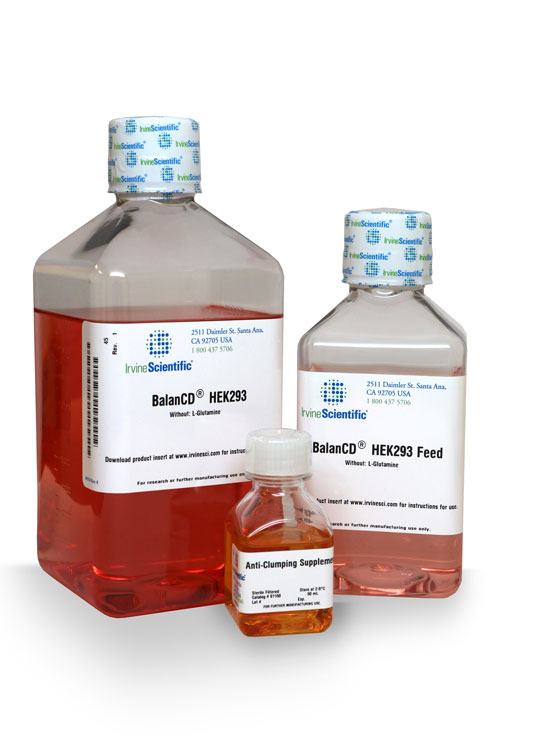 Irvine Scientific have announced the introduction of BalanCD® HEK293 System. The system includes a highly versatile series of chemically-defined media designed to increase productivity in a range of applications, rapidly delivering high yields of viral vectors and recombinant proteins.

Central to the new system’s versatility, scalability, and process efficiency is BalanCD HEK293, a bi-functional medium that supports both growth and transfection in multiple 293 cell lines, which means that there is no need to change media before and after transfection. This is complemented by BalanCD HEK293 Feed, designed to support high density cell growth to maximize production of recombinant proteins. Anti-Clumping Supplement further increases productivity by preventing the natural tendency of HEK293 to aggregate, thereby improving growth.

“Gene therapy is at the forefront of new medical therapies, but the ability to reliably produce viral vectors at industrial scale has been a challenge,” explained Dr Jessie Ni, Chief Scientific Officer at Irvine Scientific. “Our goal is to provide a reproducible solution to attaining high yields of viral vectors using a chemically-defined, suspension-cell-based platform that will help scientists further their ability to provide innovative treatments. Additionally, we designed the BalanCD HEK293 System to provide unmatched flexibility as well as performance to scientists working with 293 cell lines for other applications such as transient protein expression.”

To save time and cost in downstream processing, and to help meet regulatory requirements, BalanCD HEK293 growth and feed media are chemically-defined and animal component-free. Anti-Clumping Supplement is animal-component-free and enzyme-free. All products are manufactured in state-of-the-art cGMP facilities using strict raw material controls. To further facilitate regulatory compliance, Drug Master Files have been filed with the US FDA.