Angiogenesis is a key player in the growth of cancer cells and metastasis of tumors, it can be considered both an attractive target and major challenge in the treatment of cancer.

In this article, we take a look at the relationship between angiogenesis and cancer, highlight the role of p38α in the regulation of angiogenesis, explore the existence of non-angiogenic tumors, and discuss the ways to therapeutically target angiogenesis.

“Angiogenesis is a process characterized by the formation of new capillaries from pre-existing vasculature, which is essential for normal embryo development and tissue repair. However, angiogenesis has also emerged as a key factor for inflammatory diseases, tumor progression and metastasis,” says Angel Nebreda, Group Leader of the Signalling and Cell Cycle Laboratory, IRB Barcelona.

Once a tumor grows beyond a few millimeters in size, it can switch on the “angiogenic program” which allows it to, directly and indirectly, influence the blood supply it is receiving. The tumor’s ability to form new blood vessels guarantees its supply of oxygen and nutrients – essential resources for cancer cell growth, invasion into local tissues and progression to distant sites within the body (metastasis). 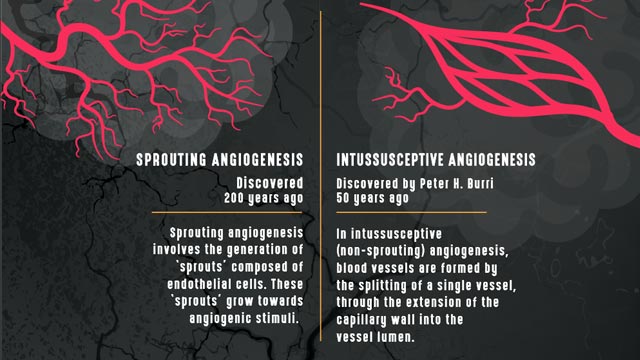 “The most common type of angiogenesis seen in human tumors is called “sprouting angiogenesis” in which new vessels bud from a pre-existing one, as a new branch forms on a tree, following the occurrence of hypoxia,” explains Francesco Pezzella, professor of tumor pathology, Radcliffe Department of Medicine, John Radcliffe Hospital. Pezzella’s research focuses on tumor angiogenesis, hypoxia and the cell cycle.

Pezzella explains that the most common series of events leading to angiogenesis are those involving the hypoxia-inducible factor (HIF) and vascular endothelial growth factor (VEGF) pathways.

“Following the decrease of oxygen tension in the neoplastic tissue, HIF-1 [Hypoxia-inducible factor-1] becomes “stable” and accumulates inside the nuclei of the cancer cells. Here it induces the transcription of a wide number of hypoxia-responsive elements. Among these is VEGF-A, the angiogenic protein most largely involved in this process,” continues Pezzella.

Pezzella explains that in the presence of high levels of VEGF-A, pre-existing vessels can become “leaky” as the endothelial cells loosen their junctions and start to detach from the underlying basal membrane.

This process causes the endothelial cells to start proliferating, forming a cord of newly formed cells along the gradient of proangiogenic factors. Pezzella elaborates: “As this new formation becomes longer, a lumen develops, oxygenated blood enters, and as hypoxia is eliminated, secretion of angiogenic factors is stopped and the new vessels resume a quiescent state.”

“The endothelial cells stop dividing with only the most advanced cells keeping proliferating.  Eventually, the tip of the new vessels will meet another vessel, fuse and canalize and the all new vessel will be quiescent again,” he adds.

p38α and its involvement in tumor angiogenesis

The team’s attention is directed more specifically towards the p38 mitogen-activated protein kinase (MAPK) signaling pathway. Using a combination of molecular and cellular studies alongside the use of mouse models they have been able to analyze the pathway’s in vivo function and investigate its involvement in tumor angiogenesis.

“p38α is a ubiquitous protein kinase activated by stress, inflammatory cytokines, and other stimuli,” explains Nebreda.

While various studies have implicated p38α signaling in the regulation of tumor initiation and progression, its exact role within the tumor microenvironment, and how this contributes to tumor growth has remained elusive.

“Work from our lab and others has provided good evidence indicating that p38α signaling contributes to tumor development by acting both in cancer cells and in normal cells of the tumor stroma,” says Nebreda.

Under “normal” conditions regular growth of tissues is sustained through the body’s ability to maintain a “homeostatic balance” between factors that promote angiogenesis (proangiogenic) and those that inhibit angiogenesis (antiangiogenic).

The group recently published a paper in Nature Communications describing p38α’s involvement in the regulation of angiogenesis in both human and mouse colon cancer. The team discovered a function of p38α in mesenchymal stem cells – which can localize around blood vessels. P38α represses angiogenesis by specifically exerting its action in mesenchymal cells. By inhibiting p38α’s activity using chemical compounds and genetic mouse models, they were able to stimulate the formation of new blood vessels in tumors.

“Our results indicate that p38α signaling in mesenchymal cells can negatively regulate the angiogenic program in tumors,” says Raquel Batlle, first author of the paper.

The discovery of non-angiogenic tumors

In the mid-1990s Pezzella’s laboratory discovered that some advanced and aggressive cancers of the lung were able to grow without the formation of any new vessels. The team observed tumors of the lung that “lived among” the normal lung tissue, with the cancer cells occupying alveoli – the small cavities within the lung. They noted that the only blood vessels present were those belonging to the “normal” lung tissue.

“After the publication of the first two papers describing these tumors, in 1996 and 1997, we started to look at their main characteristics,” explains Pezzella.

The first data to emerge indicated that these non-angiogenic tumors were in fact still hypoxic and some angiogenic factors were overexpressed, despite this, angiogenesis was not induced.

Pezzella also notes that: “Most of the tumors displayed angiogenic and non-angiogenic portions, and during the history of the disease, a primary angiogenic cancer can relapse with non-angiogenic metastases and vice versa.”

The team is now focusing efforts towards understanding why and how cells decide to behave in a non-angiogenic rather than angiogenic way (and vice versa). Pezzella explains that other groups have started looking at the mechanisms by which a cancer cell can exploit a preexisting vessel: “this process has since been named “vascular co-option” and is an active mechanism that can be interfered with, causing cell death and /or inhibition of cancer progression.” Vascular co-option can influence cancer progression, metastasis and a patient’s response to treatment. While the exact mechanisms responsible for driving this process are yet to be uncovered, both tumor cell invasion and tumor cell adhesion pathways are known to play a role.

Since Pezzella’s discovery almost 20 years ago, numerous other non-angiogenic tumors have been described in other organs including the liver, brain and lymph nodes.

“As each of these organs is obviously very different from the lung and from each other, also the nature of the non-angiogenic cancer cells and the mechanism of co-option appears to differ from the lung tumors,” notes Pezzella.

Regulation of angiogenesis is one approach to treating cancer. There are numerous antiangiogenic tactics, which can involve:

Several antiangiogenesis drugs have been developed and some are already FDA-approved for the treatment of cancer. Most agents target VEGF, its receptor or the activated signaling pathways – for example, bevacizumab, aflibercept, and ramucirumab. However, there are inconsistent effects in different tumor types and some patients can develop resistance to these therapies.

Pezzella elaborates on some of the challenges associated with these types of drugs: “Both in animal models and in human trials, advancement of tumors during antiangiogenic treatment has been observed. One of the main reasons for such a disappointing outcome links back to the assumption that a “universal mechanism” fuels angiogenesis – antiangiogenic treatments were given to everybody in a sort of “carpet bombing approach” without looking for patients possessing tumors that are perhaps more sensitive than others.”

In contrast to the above antiangiogenic strategies, there is evidence to suggest that vascular promotion, rather than inhibition, could be a viable strategy for improving cancer therapy – by facilitating chemotherapy drug delivery.

Batlle explains this concept, drawing upon their understanding of p38α’s involvement in angiogenesis: “We have described a new mechanism that regulates blood vessel formation, suggesting that p38α inhibitors may help to enhance the tumor vasculature in a controlled manner, and facilitate chemotherapy-based cancer treatments.”

“Therefore, our data provide additional evidence supporting the idea that vascular promotion could be a useful strategy to improve cancer therapy.” Batlle also notes that vascular promotion can be associated with less hypoxia and less desmoplasia, and the decrease in these two processes has been reported to reduce metastasis in pancreatic ductal adenocarcinomas.

“As a more complete picture of the interaction between cancer cells and blood vessels emerges, we can devise new “evidence-based” treatments that can target both new vessel formation and the hijacking of existing vessels, as well as finding new targets tailored to either non-angiogenic or angiogenic cancer cells,” concludes Pezzella.

Complete the form below to unlock access to this Audio Article: "Angiogenesis in Cancer"