These "normal" cells act as the body’s basic building blocks and possess specific characteristics that enable them to maintain correct functioning of tissues, organs and organ systems. Normal cells:

Cancer is a complex genetic disease that is caused by specific changes to the genes in one cell or group of cells. These changes disrupt normal cell function – specifically affecting how a cell grows and divides. In contrast to normal cells, cancer cells don't stop growing and dividing, this uncontrolled cell growth results in the formation of a tumor. Cancer cells have more genetic changes compared to normal cells, however not all changes cause cancer, they may be a result of it. The genetic changes that contribute to cancer usually affect three specific types of gene; proto-oncogenes, tumor suppressor genes and DNA repair genes.

"Hallmarks of Cancer" is a term used to describe the specific characteristics that distinguish cancer cells from normal cells. 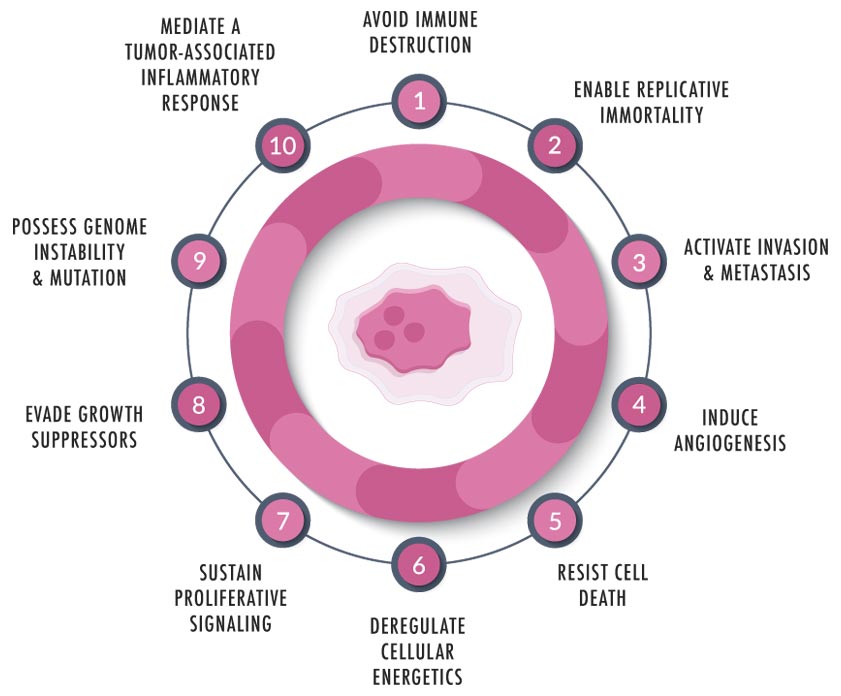 Cell shape: Normal human cells come in many shapes and sizes – as they differentiate and adopt specialized functions their shape changes accordingly – for instance, a red blood cell looks very different to a nerve cell. Different types of cells do not look alike, but, if you analyze cells of the same cell type they will look extremely similar, maintaining a uniform shape.

For years researchers have been peering down microscopes, looking for distinct features that can help them determine the difference between a cancer cell and normal cell. Cancer cells are misshapen, and appear as a chaotic collection of cells, in an array of shapes and sizes. Researchers have been investigating the relationship between cancer cell shape and a patients’ outlook, and whether cell shape may also help to distinguish between the different types of cancer.

Nucleus: In normal cells, the nucleus has a smooth appearance and maintains a uniform, spheroid shape. Several structural components are involved in the regulation of nuclear morphology. One of these structural components is the nuclear lamina. Cancer cell nuclei are frequently misshapen and bulges known as “blebs” can often be observed in cells’ nuclear membranes. Research suggests that this "blebbing" is caused by an imbalance in the proteins that constitute the nuclear lamina which leads to separation of the lamina fibers.
Chromatin: The fine, evenly distributed chromatin found in normal cells transforms into coarse, chromatin in cancer cells – aggregating into irregular clumps that vary in both size and shape.

Nucleolus: Tumor aggressiveness and clinical outcome can both be measured by observing the morphology of a cancer cell’s nucleolus/ nucleoli. The nucleolus becomes increasingly enlarged and more irregular in cancer cells – cells can have multiple nucleoli within the nucleus.

Blood supply: Angiogenesis is defined as the development of new blood vessels that form from pre-existing vasculature. Angiogenesis is a vital process in normal cells that occurs during development, growth, and wound healing. However, it is also implicated in the growth of cancer, through the tumor’s ability to secrete chemical signals that stimulate angiogenesis.

Below we outline some of the key differences between cancer cells and normal cells.

How do cancer cells behave differently from normal ones?

As cancer cells display unique characteristics in comparison to normal cells, researchers can take advantage of these differences when coming up with ways to combat cancer.