It’s almost 100 years since Otto Warburg’s observation that cancer cells metabolize glucose in a manner that is distinct from that of cells in normal tissues.1 Yet, we still don’t fully understand why. In the years since, significant effort and resource has focused on understanding cancer-specific metabolic changes. Today, attention is also turning to the metabolic interaction between a tumor and its host. With advances in metabolomics and molecular imaging technologies, can the cancer metabolism field finally reach its full potential?

The importance of cellular metabolism in cancer

“Whereas in the past metabolic changes were thought as secondary to other important tumorigenic events, we now know they might be critical for tumor growth,” says Dimitrios Anastasiou, PhD, Group Leader of the Cancer Metabolism Laboratory at the Francis Crick Institute in London. “For example, there is evidence that most tumor suppressors or oncogenes induce expression changes in metabolic genes, which contributes to tumorigenesis. This has led to a resurrection in cancer metabolism research.”

As a consequence, much of the focus of cancer metabolism research in the past 15 years has been on cancer cell-autonomous metabolic changes, explains Anastasiou. However, it is also now becoming clear that there are metabolic changes at the level of the whole body that might be linked to the metabolism of tumors, and that these changes have clinical relevance. “There are important clinical phenotypes, like cachexia – the loss of muscle and adipose tissue mass, that significantly influence patients’ quality of life. Although these systemic changes have been known for a long time, the clinical relevance of this area is a relatively new focus for the entire field.” 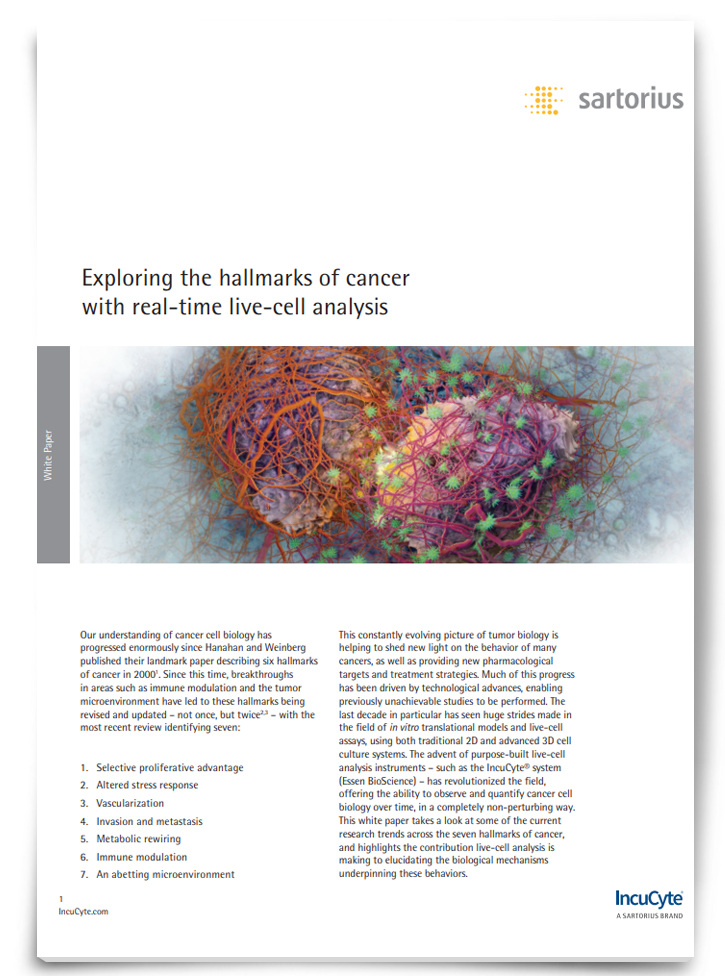 The Incucyte® system is an example of a technique that offers the ability to observe and quantify cancer cell biology over time, in a completely non-perturbing way.

Download this whitepaper to discover the current research trends across the seven hallmarks of cancer.

Two main metabolic pathways have attracted most of the attention in cancer research, to date: the metabolism of glucose via glycolysis and glutamine via the Krebs (TCA) cycle. Glucose has been a significant focus because it is avidly taken up by many tumors, evidenced by the use of glucose as a tracer in positron-emission tomography (PET) scans. Yet, researchers still do not fully understand the role of either pathway in cancer pathogenesis.

“The idea that glucose provides building blocks for biosynthesis in cancer has been around for a long time. Although we can trace where the glucose carbon molecules go, we don’t fully understand the importance of the redistribution of that carbon in different metabolic pathways,” explains Anastasiou.

In addition to trying to understand what glucose and the glycolytic pathway does in cancer, researchers are now also exploring how to interfere with other metabolic pathways, such as amino acid metabolism, to prevent cancer development2 or spread,3 and new focus is directed towards the role of other processes such as lipid and nucleotide biosynthesis.

Perhaps if anything could be used as the poster child of the potential of targeting metabolism for cancer therapy, it would be the enzyme isocitrate dehydrogenase (IDH) which is mutated in a proportion of gliomas and glioblastomas, muses Anastasiou. “Discovering the role of mutated IDH was a breakthrough because it solidified the idea that metabolic changes are not just a bystander, but can also drive cancer development on their own right. Importantly, with cancer metabolism processes being ubiquitous in the body, it’s a major challenge to identify markers that would indicate a patient is likely to be receptive to anti-metabolites,” he explains, “but with IDH mutations, this problem was solved upfront because it’s possible to test for mutations of the enzyme and automatically we have a biomarker to apply these IDH-targeting drugs. But this will be a major challenge for targeting other metabolic processes – how do you actually pair metabolic treatments to easily accessible biomarkers or assays?”

Thankfully new technologies are allowing metabolism to be characterized in unprecedented detail and could provide non-invasive options for detecting metabolic biomarkers.

At the Cancer Research UK Beatson Institute in Glasgow, David Lewis, PhD, Group Leader of the Molecular Imaging laboratory is developing advanced PET imaging techniques to study a diverse range of metabolites in vivo. “When you look at the cancer metabolism area, it’s much more than glucose, there’s a real opportunity for applying the technical ability we have with PET imaging to other types of metabolites.”

One of the most exciting developments in Lewis’ field over the last year has been the advent of whole body PET scanners, which have now been FDA approved are producing incredible images of dynamic metabolic processes in the whole body. “For investigating links between the tumor and its host this will be fundamental as it will not be possible to biopsy all the tissues in the body,” explains Lewis. “With whole body PET imaging we can simultaneously visualize the tumor and host metabolism acting in unison, so it could be a very important way to discover cancer-host therapies and ultimately monitor their effectiveness.”

One of the major advantages, he says, is that PET is a non-destructive technology: “We don’t have to take a piece of tissue and break it down, we can look at it in its natural location. And because we’re looking at radioactivity, which is a highly energetic process, the technology is very sensitive, getting down to picomolar concentrations of metabolites. This means that we don’t perturb the system while we’re imaging it. Other methods can be rather like a challenge experiment – where you’re looking at what the tumor does with a metabolic substrate ‘load’ – whereas with PET we can look at what the tissue is doing natively.”

Lewis wants to use PET to gain an understanding of the metabolic heterogeneity of tumors and how this changes over time. “We’ve got some nice models, and we’ve been focusing on lung cancer because it’s a very heterogeneous disease. In addition to using fluorodeoxyglucose, which is used in diagnostic PET, we’ve been using another molecule called 11C-acetate which is a substrate for several metabolic pathways from mitochondrial oxidation to de novo lipid synthesis, so it’s allowed us to separate some of those processes spatially in the tumor models and we’ve seen a real difference in the nutrient uptake.”

One application of this research would be to identify metabolically rich or replete regions of tumors that can help to tailor treatment. This is done to a limited extent with radiotherapy, where hypoxic regions are ‘painted’ onto scans ahead of intensity-modulated radiation therapy.  But that’s just the beginning, Lewis says: “If we can understand what the molecular mechanisms are within the different heterogeneous regions, we can match those sub-regions to perhaps radiotherapy resistance, or use the information to rationally combine treatments.”

One of the challenges of being guided by metabolic phenotypes, or using metabolism-targeted drugs, is that we don’t know how plastic these processes are. “There will inevitably be some resistance to metabolic treatments as tumors evolve over time, but because we can do serial non-invasive metabolic imaging after we’ve started treatment we can monitor this and adapt therapy accordingly.” Ultimately, the hope is to build an integrated diagnostic and therapeutic pipeline where this could be done in unison.

Where next for cancer metabolism?

Although the concept of targeting cellular metabolism in cancer is not new, there is a renewed appetite for understanding its intricacies and exploiting these through multiple diagnostic therapeutic strategies. What’s needed now, says Anastasiou, is to look at the problem through a different lens:

“It’s clear when you talk to people in this field that things are more complicated than they seem. With the advent of exciting new technologies, we are better poised to find rational ways to understand and exploit this complexity. For me, the biggest question is how the metabolism of the tumor and the metabolism of the host interact with each other; what is cause and effect, and what are the signals that enable this communication? My hope is that if we interfere with this phenomenon we can cure people of their tumors, but even if we can’t, I believe we will find ways to improve their quality of life.”

Joanna Owens, PhD, is a Freelance Writer and Editor, based in the UK

Complete the form below to unlock access to this Audio Article: "Cell Metabolism and Cancer"

Joanna Owens, PhD
More from this author >
Advertisement
Chosen for You
Whitepaper