Complete the form below and we will email you a PDF version of "Memories of Cancer: What the Extracellular Matrix Can Tell Us About Cancer and How To Combat It"

Even long after successful treatment of certain cancers, our bodies can continue to be impacted by the disease. In fact, it has been observed that cancer cells leave behind a “biological memory” that can make cancer recurrence more likely in the future. Researchers have been studying this phenomenon by examining the role of chronic inflammation in the development of cancer and cancer-related disease states. While inflammation is a normal response from the immune system defending the body from injury and intruders (like viruses and foreign bacteria), it can sometimes spiral out of control. Such “chronic” inflammation has long been linked to cancer, especially the most lethal and untreatable types. But the details of this mysterious relationship have also long defied scientific elucidation – until now.

How does chronic inflammation lead to cancer?

A team of over 60 scientists spread across four countries – Canada, Israel, the UK and USA – are now unravelling this age-old mystery. The research project, STORMing Cancer, which stands for STrOmal ReprograMming Cancer, is funded by the Cancer Research UK (CRUK) Grand Challenge. The team, led by Dr. Thea Tlsty of University of California San Francisco (UCSF), is pioneering a radical new approach to understanding the “nastiest of nasty” cancers, using state of the art technologies – many of which they are developing as they go along!

Chronic inflammation associated cancers account for approximately 25% of all cancer-related deaths, or over 1.7 million deaths worldwide annually. It has been observed that several tissues seem to have a common pathway to cancer, starting with some kind of injury. This injury can lead to chronic inflammation and subsequent protective changes in the tissue, a process called metaplasia. While in most people, these changes function well to shield the tissue from further assault, in a small minority of people, this state becomes an intermediate pre-cancerous state, which can progress to full-blown cancer.

To understand how chronic inflammation can lead to cancer, the team is looking at the building blocks of tissues, specifically two cell compartments, as well as the surrounding proteinaceous material, and the way it all interacts with each other. Epithelial cells, which can transform into malignant cancer cells, sit on a layer of stromal cells. They communicate using biochemical messengers in the extracellular matrix (ECM), the scaffolding in which cells are suspended. For decades, experiments have shown that cellular conversations between epithelial cells and fibroblasts – and more recently with other stromal cell types (endothelial and lymphatic cells, macrophages, and many immune cell types (B cells, T cells, dendritic cells)) – can determine whether an epithelial cell transforms into an invasive tumor cell, or a tumor cell acting like a normal cell.

If you place a normal epithelial cell (from healthy tissue) next to stromal cells from around a tumor, the epithelial cell will behave like a tumor cell. Moreover, if you place a tumor cell next to stromal cells from healthy tissue, the tumor cell will behave like a normal healthy cell, despite maintaining their altered genotype. This indicates that stroma is therefore both dominant and dynamic. Investigations into how the stromal cells controlled the epithelial cells, revealed that stromal ECM is just as dominant and dynamic. Thus, a healthy stromal environment will be key for successful cancer treatments.

To elucidate how alterations in stromal cells and ECM can program epithelial cells into becoming cancers or conversely how healthy stromal cells and ECM can reprogram cancers into becoming healthy cells again, the STORMing Cancer teams are studying cancers in four body parts, where the disease process often starts with conditions caused by chronic inflammation. In the esophagus, damage from chronic acid reflux can lead to the development of Barrett’s Esophagus. In the lungs, inflammation in the lining of the bronchial tubes, which can be caused by smoking, may lead to chronic bronchitis. In the stomach, chronic inflammation in the stomach lining, often caused by bacteria such as Helicobacter pylori, can lead to gastritis. And in the colon, chronic inflammation can cause colitis and other inflammatory bowel diseases, such as Crohn’s disease or ulcerative colitis.

These four cancers are classic examples of chronic inflammation-associated cancer. Such cancers tend to be malignant, metastatic, treatment-resistant, and lethal. Four stages have been identified between healthy tissue and cancer: normal, metaplasia, dysplasia, and tumor. To chart the natural history of the disease and understand the cellular evolution and micro-environment ecology involved, the team is examining tissue samples from all four stages, donated by patients and hospital biobanks. Once obtained, cells from these samples are analyzed by single-cell RNA sequencing and 3D multiplex imaging. In parallel, samples from the same patients are prepared using a protocol optimized at UCSF to extract and purify the ECM either from fresh tissue samples or from formalin fixed paraffin embedded (FFPE) specimens. These ECM samples are then sent to the Buck Institute for Research on Aging (Novato, CA) for proteomic analysis using mass spectrometry (MS). This latter type of analysis is at the very heart of the project (see Figure 1). 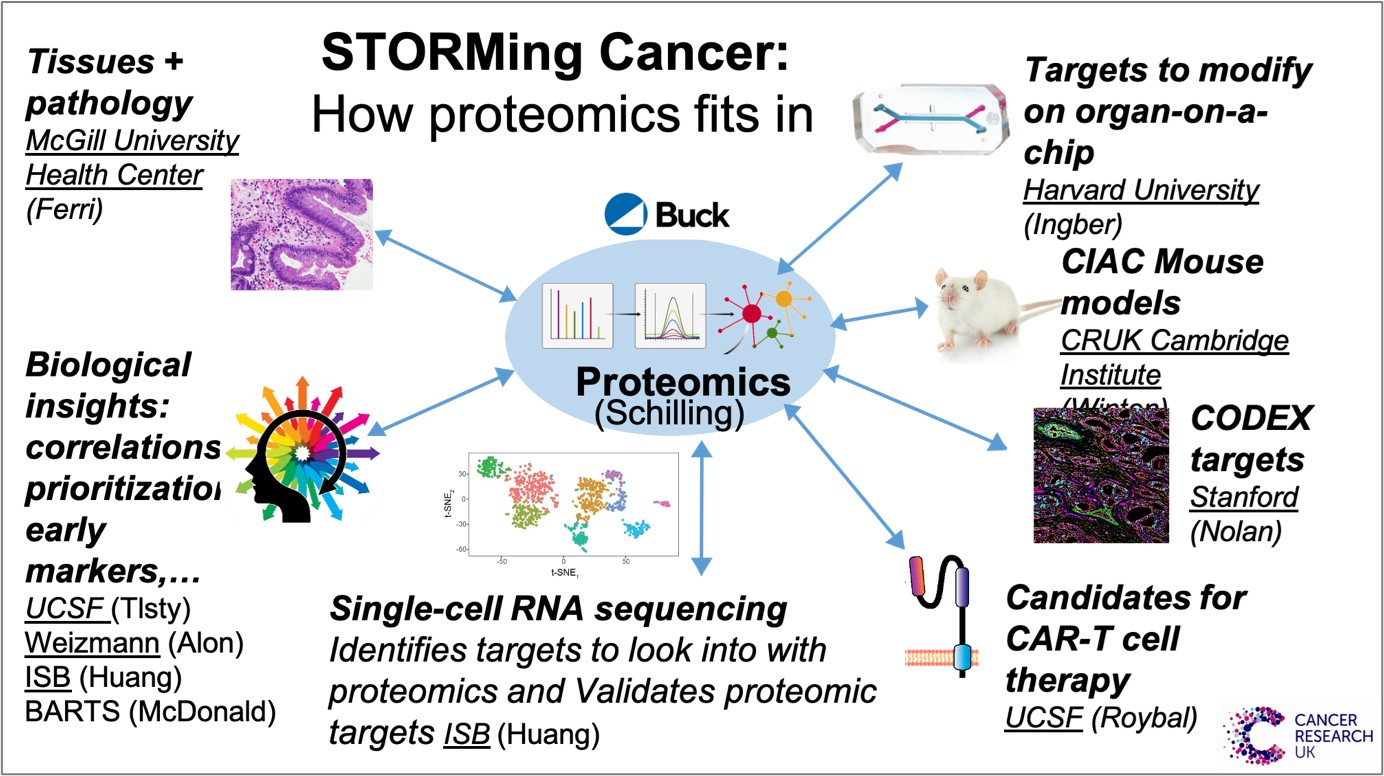 Figure 1: How proteomics fits in with the other multidisciplinary teams on the STORMing Cancer project. Credit: Cameron Wehrfritz, Buck Institute for Research on Aging (Novato, CA).

Proteins remodeling the extracellular matrix: Both cause and cure?

Heading up the proteomic analysis team is Dr. Birgit Schilling at the Buck Institute for Research on Aging, a long-time collaborator on the implementation of new MS scan types and low flow-rate methodologies. There, the ECM samples are processed and analyzed on advanced quadrupole time-of-flight (QTOF) MS instruments, using in-depth scans and a specialized untargeted, data-independent approach (DIA) called SWATH Acquisition. This approach comprehensively detects and quantifies each and every detectable peptide in the ECM samples which are mapped back to comprehensive protein profiles present in the samples. Each analysis takes two to three hours, resulting in a multi-dimensional readout so thorough it essentially creates a digital archive of the sample such that it can be re-interrogated (post-acquisition) for new information even when no additional patient sample is available. Thus, as the project progresses and new protein candidates are identified as interesting markers for reprogramming pre-cancerous or tumor cells, the team can look back at the acquired data to check whether those proteins were detected and if so, whether their abundance differed between samples. Another benefit of SWATH is the elimination of isobaric labeling that necessitates all samples to be acquired at the same time for comparability. Instead, SWATH Acquisitions are label-free, robust, and precise enough that each sample can be analyzed individually as and when it arrives at the lab, while still enabling accurate relative comparison and quantification between samples.

Indeed, the proteomic signatures have been so strong that such correlations have already been made between samples so far (personal communication). A dramatic remodeling of the ECM has been unraveled, especially between the normal and metaplastic stages, when about 80% of the ECM proteome is already altered. Some of these changes persist in dysplasia and cancer while other changes are more dynamic with transient increases at the metaplasia and dysplasia stages followed by a dramatic loss at the tumor stage. Moreover, the changes hold up between the different cancer types, suggesting that there is indeed a common disease process involved. Together with validation through single-cell sequencing and multiplex imaging data, this points to the extensive remodeling of the ECM observed in response to chronic inflammation as a critical step in the disease process leading to certain cancers. The key now is to find out what distinguishes individuals who progress to dysplasia and cancer from those – the vast majority – who do not. And what triggers progression and how it can be prevented or reversed.

The final piece of the puzzle lies in the generation of disease models, from 2D cell cultures, and 3D microfluidic organs-on-chips, to mouse models. These models allow researchers to test whether candidate protein biomarkers can indeed constitute targets enabling diagnosis, risk stratification, and treatment. Some of these models, such as the organs-on-a-chip, can be created using cells from individual patients and as such could also provide an avenue for personalized medicine.

Guided in part by engaged patient advocates who make sure that the questions that matter most to patients are answered, the project has four more years to go. Given the remarkable progress made so far, this novel approach of focusing on the cells and extracellular matrix around the tumor, rather than only on the tumor cells, seems very promising and may well give rise to a truly huge leap forward in cancer biology research. Understanding the biological memory effects of cancer could indeed translate into novel treatment options that reprogram biological matrices to prevent or reverse cancer, once and for all.

Complete the form below to unlock access to this Audio Article: "Memories of Cancer: What the Extracellular Matrix Can Tell Us About Cancer and How To Combat It"