The Role of Wnt Signaling in Cancer

The Role of Wnt Signaling in Cancer

Wnt signaling is an evolutionarily conserved regulatory pathway that governs numerous normal cellular and developmental processes such as cell fate determination, cell proliferation and migration. However, aberrant Wnt signaling has also been identified as a key mechanism in cancer biology. This article summarizes both the canonical (β-catenin dependent) and non-canonical (β-catenin independent) signaling pathways. It also highlights the role of Wnt signaling in numerous cancers and discusses novel approaches to targeting the pathway. 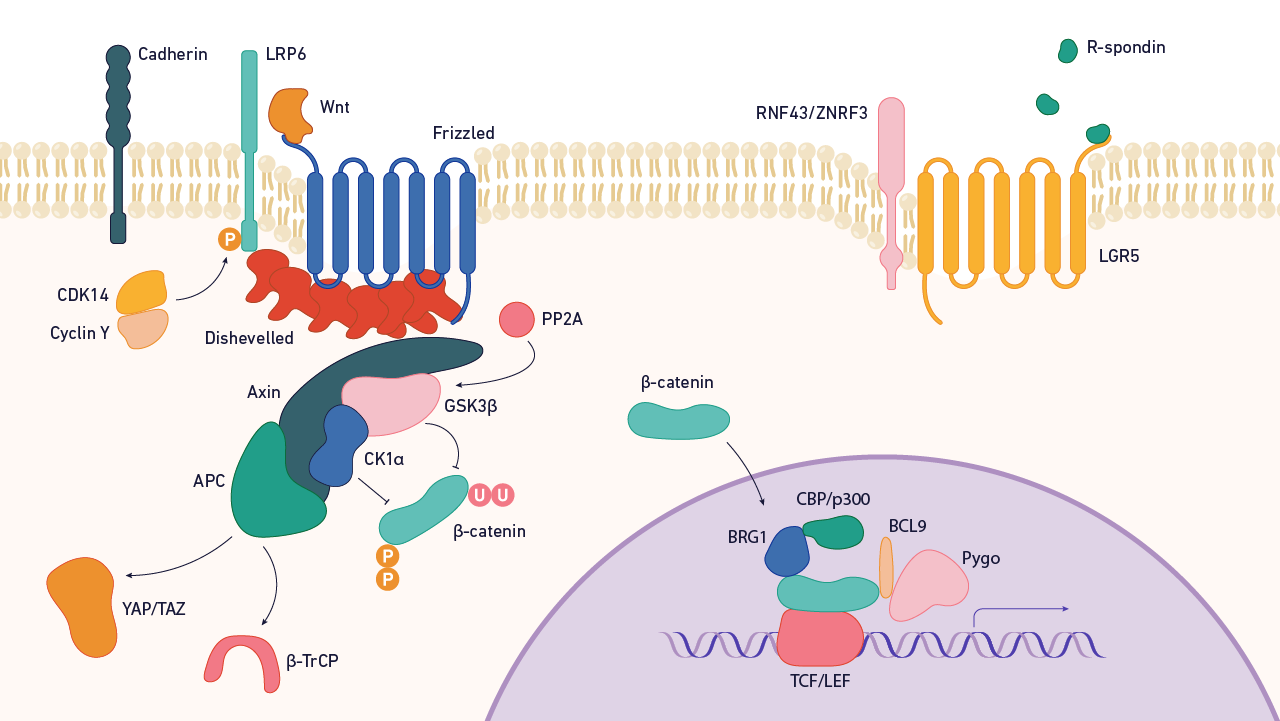 Canonical Wnt signaling is activated as secreted Wnt ligands bind to the seven-pass transmembrane receptor Frizzled (blue) and the single-pass low-density lipoprotein receptor-related protein (LRP) (teal). LRP is then phosphorylated, which leads to the recruitment and polymerization of Dishevelled proteins (red) at the plasma membrane.
The Dishevelled polymer (active) is now able to inactivate the destruction complex; that consists of AXIN, adenomatous polyposis coli (APC), and GSK3β, which leads to the stabilization and cytoplasmic accumulation of β-catenin (teal) which then translocates to the nucleus.
Once it reaches the nucleus it is imported, once inside β-catenin forms a complex with T-cell factor (TCF) and lymphoid enhancer factor (LEF) (dark pink), acting as a transcriptional switch, that changes multiple cellular processes.1 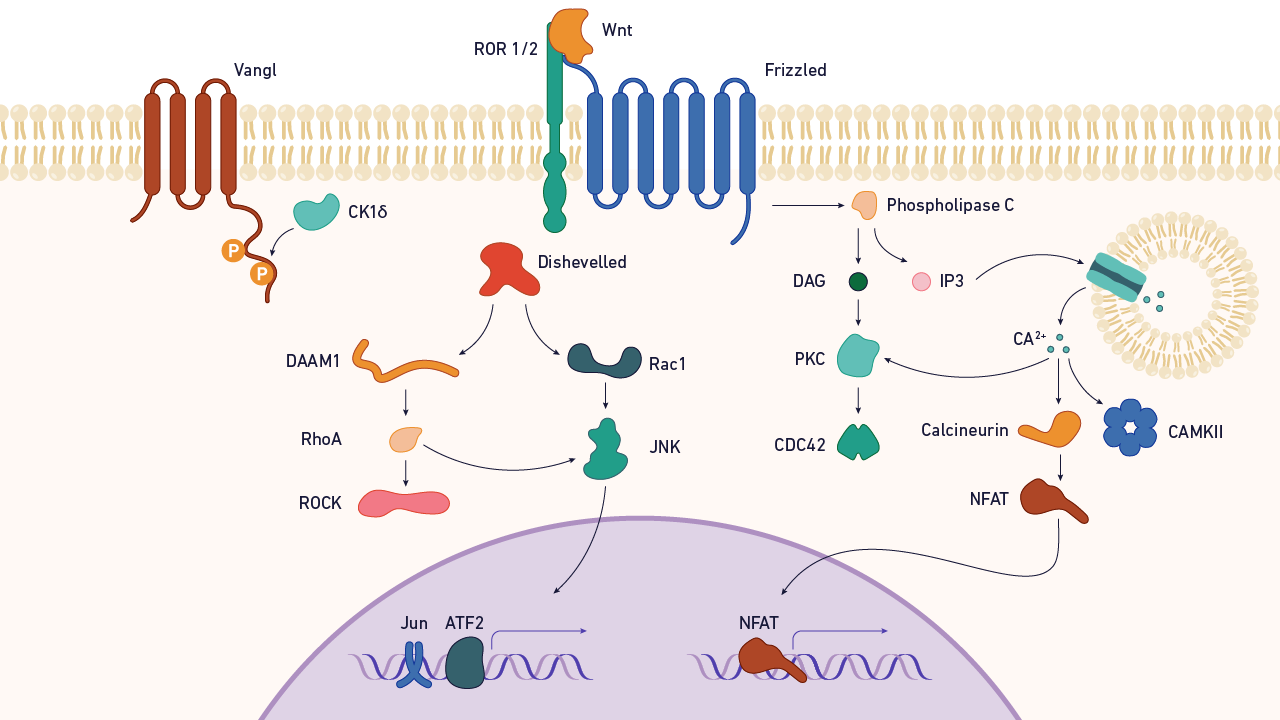 Wnt ligands bind to the ROR-Frizzled complex (blue) which leads to the recruitment and activation of the Dishevelled protein (red). In its active form Dishevelled, via de-inhibition of DAAM1, is capable of binding to Rho (a small GTPase) (light orange). Together, Rac (dark blue) and Rho trigger Rho kinase (ROCK) and JNK. This "trigger" changes transcriptional responses and can also lead to cytoskeletal rearrangements.

Emerging roles of Wnt in cancer

A key hallmark of sporadic colorectal cancers is the mutational inactivation of adenomatous polyposis coli (APC), a negative regulator of the Wnt signaling pathway.2 Recent studies have revealed that different APC mutations translate to distinct levels of canonical Wnt signaling and are also linked to characteristic tumor locations, with differing "optimal" levels of signaling associated with proximal vs distal tumors.1,3 Murine models of the disease show that if APC functionality is restored adenomas can revert back to normal tissue. Chromosomal instability has also been linked to APC loss-of-function (LOF), this LOF can also observed for other Wnt pathway components. Wnt-signaling dysregulation in colorectal cancers is not exclusively caused by APC, for example R-spondin/Lgr5/RNF43 module mutations are also associated with Wnt-dependant growth of tumors.1 It is estimated that ~92% of sporadic colorectal cancers contained at least one alteration in a Wnt pathway regulator.4

Investigation in to the role of Wnt signaling in both hematopoiesis and leukemia has increased over the last few years. Long-term maintenance of hematopoietic stem cells relies on a carefully balanced Wnt signaling pathway. In most leukemias Wnt activity is increased. Mounting evidence suggests that dysregulation of Wnt signaling is an instrumental factor in leukemogenesis. In murine models of T-acute lymphoblastic leukemia (ALL), expression of activated β-catenin causes thymic lymphoma development. Additional studies indicate that β-catenin is likely essential for the conversion of pre-leukemia initiating cells (pre-LICs) to the LIC state, as well as for the self-renewal of LICs.1

The role of canonical Wnt signaling in the development of melanoma is well established, however its involvement in this cancer’s progression is a somewhat controversial topic.  Several studies indicate that overall survival of melanoma patients is increased with increased levels of nuclear β-catenin.1 However a murine model of melanoma, with a mutant PTEN and BRAF genotype, demonstrated that activated β-catenin accelerated the development of melanoma and promoted metastasis. When it comes to treatment, melanoma patients with lower levels of β-catenin undergoing BFRAF inhibitor treatment had a better prognosis compared to those with higher β-catenin levels. The relationship between non-canonical Wnt signaling and melanoma progression is well studied; studies have established that Wnt5a/ROR2 activity causes increased cell motility and induces a pseudo-senescent cell state, in this state the cells are more resistance to chemo and radiotherapy. Melanoma phenotype switching (proliferative vs invasive melanoma cell states) has been somewhat linked to a balance between the canonical and non-canonical pathways.1

Many existing cancer drugs designed to block Wnt signaling are "non-specific" meaning they target both normal cells and tumor cells which can result in significant adverse effects.

A major challenge resides in developing a strategy effective enough to target the dysregulated Wnt pathway whilst limiting/ preventing damage to the normal functioning of the Wnt pathway, ensuring that its essential role in numerous critical cellular processes remains unaffected.
Why is it so challenging to target the Wnt signaling pathway?

Researchers have recently identified a protein, known as USP7, exclusively involved in the over-activation of Wnt signaling in tumor cells, making it a potential therapeutic target for the treatment of bowel cancer and other cancers with APC mutations. USP7 protects β-catenin in cells, leading to its accumulation when the APC gene is mutated. USP7 inhibition/depletion inhibits Wnt signaling in APC mutant colorectal cancers by restoring β-catenin ubiquitination – the addition of ubiquitin flags β-catenin for degradation via the proteasome preventing further activation of the pathway.7

Patients undergoing immunotherapy, specifically treatment with checkpoint inhibitors, have a significantly greater increase in survival time compared to those enduring chemotherapy. However, response is low in some cancer types and resistance to immunotherapy has been observed. This resistance can be classified as primary, adaptive or acquired. Combining molecular targeted therapies with immunotherapy is a proposed strategy for enhancing cancer immunotherapy and overcoming resistance to it.8

Below are some examples of Wnt pathway inhibitors:10

This type of inhibitor prevents the membrane-bound O-acyltransferase (MBOAT) known as Porcupine (PORCN) from supplying the palmitoyl group to Wnt proteins, addition of this group is crucial for the normal secretion of the Wnt protein. Examples of inhibitors currently in development include LGK974 (PORCN-selective inhibitor) which has been shown to prevent tumor growth in vivo. Ongoing clinical trials are investigating the use of LGK974 for head and neck cancers, and colorectal cancer. The small molecule PORCN inhibitor ETC-159 has been shown to be efficacious in preclinical models of RSPO-translocated colorectal cancer.10 Phase 1 clinical trials are currently ongoing.

Monoclonal antibodies (MAbs) are another therapeutic strategy to inhibit the Wnt signaling pathway. MAbs against Wnt-1 and Wnt-2 proteins have been shown to result in tumor suppression in several cancers, including melanoma and mesothelioma. Examples of this type of inhibitor include OMP-18R5 (vantictumab) that acts by targeting five of the ten Fzd receptors, OMP-54F28, a fusion protein consisting of the extracellular ligand-binding domain of the FZD8 receptor and the Fc domain of a human IgG1 antibody. OMP-54F28 binds Wnt ligands and prevents them from binding to Fzd receptors which leads to inhibition of the pathway.10