Complete the form below and we will email you a PDF version of "What Is Radiotherapy?"

Whilst the development of radiotherapy began as early as 1900 – with Marie and Pierre Curie suggesting X-rays could be used to treat tumors –  radiotherapy, as we know it, wasn’t conceived until the 1920s. Claudius Regaud, a French physician and biologist, demonstrated that several human cancers could be treated using radiation fractionation, which involved breaking up radiation treatment into smaller doses. This fractionation limited the side effects of the therapy.

Several years later, the Scottish oncologist Ralston Paterson began to experiment with radiation doses for treating cancer. From his research, he devised a method for determining the required dosage of radiation needed to treat different types of tumors. In collaboration with his colleague Herbert Parker, the “Paterson–Parker rules” were created, which led to the subsequent development of the Radium Dosage System.

“The use of high-energy radiation from x-rays, gamma rays, neutrons, protons, and other sources to kill cancer cells and shrink tumors.” – A definition of radiotherapy, provided by the National Cancer Institute.

How does radiotherapy work?

Radiotherapy kills cancer cells by causing irreparable damage to their DNA, meaning they are unable to continue growing or dividing.

Radiotherapy is most effective at killing cells that are actively dividing – it doesn’t work as well for cells that are in the “resting” (G0) phase of the cell cycle. Normal cells will spend a significant amount of their time in this resting phase, whilst they carry out their specialized functions. In contrast to normal cells, cancer cells divide quickly and frequently, leaving them more vulnerable to radiation.

The type of radiotherapy (Table 1), the radiation dose administered and the speed of cell growth all influence how quickly a cell is damaged and when it will undergo apoptosis – this might take days or even months. Radiosensitivity is the term used to describe a cell’s susceptibility to radiotherapy.

Table 1: An overview of the different types of radiotherapy.

Radiotherapy can be used during early and advanced stages of cancer. There are several different approaches available, depending on the overall goal of the treatment (Table 2).

Radiotherapy – side effects and suitability

There is a limit to the amount of radiation an area of the body can safely receive over the course of a patient’s lifetime. Therefore, it may not be possible to re-treat the same area of the body, depending on the dosage of radiation that may have already been applied. As well as killing cancer cells, radiation can also affect nearby normal cells – damage to these healthy cells can result in adverse effects, which differ depending on the part of the body being treated.

Due to the potential adverse effects associated with radiotherapy, researchers have been developing innovative ways to determine whether a patient is likely to benefit from radiotherapy. A team from the Champalimaud Centre for the Unknown in Lisbon, Portugal, has developed an assay to determine radiosensitivity using zebrafish “avatars”, whereby tumor cells from human colorectal cancer cell lines are transplanted into the model organisms.

Two studies have recently demonstrated that adverse effects associated with radiotherapy could be reduced by changing the way the radiation is delivered to patients. In the first study, image-guided radiotherapy – which uses patient scans and X-rays to help plan treatment – was used to limit the total area of tissue subjected to the radiotherapy treatment – reducing the likelihood of adverse effects in patients with prostate cancer.

The second study investigated whether giving smaller doses of radiation over a shorter time frame, compared to standard care, could provide the same result as that achieved using standard treatment, whilst minimizing adverse effects of radiotherapy on the bowel in patients with prostate cancer. The patients experienced reduced adverse effects due to the specific radiotherapy techniques used in the trial whilst maintaining the same disease management achieved using traditional radiotherapy approaches.

Findings from a randomized Phase 3 study comparing the use of a novel precision radiotherapy with a standard radiotherapy approach in head and neck cancer patients were reported at the 2020 American Society of Clinical Oncology meeting. The trial demonstrated that the novel approach (dysphagia-optimized intensity-modulated radiotherapy) – which has been purposefully designed to reduce the risk of swallowing difficulties (dysphagia) was successful at lessening adverse effects, compared to standard radiotherapy.

Combining radiotherapy with other therapeutic strategies

In some cases radiotherapy may be combined with other cancer treatment strategies including; chemotherapy, surgery or immunotherapy.

In recent years there has been increasing interest in combining radiotherapy methods with drug compounds, in attempts to increase the chances of successfully targeting and killing cancer cells  (Figure 1). 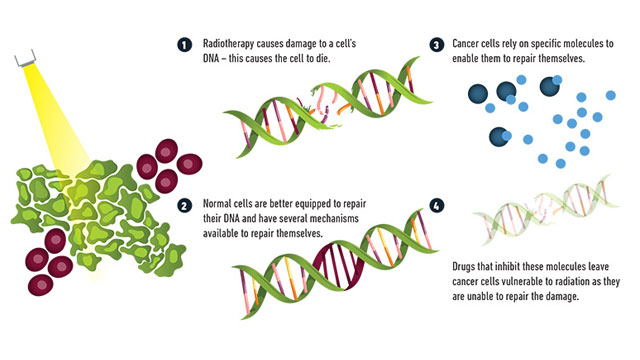 A study published in Proceedings of the National Academy of Sciences reported that the combined use of radiotherapy and the drug trifluoperazine improved overall survival in mice with glioblastoma – a difficult-to-treat and deadly form of brain cancer. Using the combination therapy, it was possible to target glioblastoma cells whilst avoiding resistance to treatment – drug resistance is often observed when tackling this type of cancer.

Recent advances have been focused on enhancing the efficacy of radiotherapy whilst decreasing the likelihood of adverse effects. Whilst there are now many different strategies available, radiotherapy is generally still considered one of the most effective techniques for treating cancer.
Related Topics
Cell Culture
Anticancer Therapies
Cancer Immunology
Meet the Author