Combating the Spread of Ebola

In an effort to curb the further spread of Ebola in Sierra Leone a team of scientists released their first dataset of the virus' genetic structure online. This move will improve researchers' ability to monitor the pathogen's evolution in real-time, enabling the development of more effective strategies against further outbreaks.  To learn more about the situation in Sierra Leone, the challenges of sequencing in the extreme conditions and open source sharing we spoke with Professor Ian Goodfellow, head of Virology at the University of Cambridge.

AB: You are part of a team that has recently mapped the genomic data of the Ebola virus. How will this detailed information you have published be utilised by researchers to better understand the disease?


Ian Goodfellow (IG): The availability of real-time sequencing data can provide very useful insights from a number of perspectives. It gives you an idea of how the virus is evolving and how the sequence is changing meaning that it is possible to make sure that sequence of the current viruses can still be detected by the diagnostics tests currently being used. The tests are based on detecting the viral RNA genome and if the region being detected changes then the assay can become less sensitive. This would cause real issues, but thankfully this does not appear to be happening. We can also see where new viruses come from by how closely related they are to previous sequences. In many cases, patients who present with Ebola either have no idea where they got it from or are too afraid to give the details for fear of reprisals. Sequencing bypasses all this and can tell you very clearly where the most closely related viruses have come from. Our data clearly indicates that there is a huge amount of cross border movement of infections - even now and so far into the epidemic. Controlling these cross border movements will be key to ending the epidemic.


AB: Can you tell me about the current situation in Sierra Leone and the impact the work has had so far? 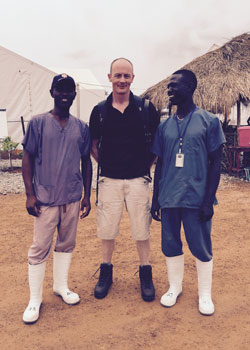 IG: The current situation in Sierra Leone looks very promising. The country has really worked hard to get to this point and many districts haven’t had any cases for many months. The problem areas are now around the border with Guinea as well as in some places in Freetown. It’s early days to see what impact this work has had but we have informed the Ministry of Health and they have passed the information on to the respective ministers. My hope would be that they can see the real need to focus efforts on border control, although I recognise that while the borders appear on maps, they are in fact very porous. I have heard stories of men with wives both in Sierra Leone and Guinea where the houses are only a few minutes apart.

AB: Did your time in Sierra Leone highlight a need for open source sharing of genomic data?


IG: Absolutely. I am not an Ebola specialist, nor have I really worked in the field doing this type of work before. However, while there establishing a diagnostic lab with Public Health England I recognised that there was a real need to have this type of capability on the ground but the real power to this comes about only through openness and collaboration. We have interacted with a number of like-minded individuals and we are starting to gain real insights into the transmission chains currently operating in both the affected countries.

AB: This project was unique in the sense that the samples were processed on the ground in disease stricken areas. Why were the Ion AmpliSeq Ebola Panel for the Ion PGM and Ion Chef gene sequencing system selected for this?


IG: This was by far one of our best decisions. We needed a workflow that could be operated in extreme conditions. Running a sequencer in conventional labs is very straightforward these days, however running one in a tent where humidity approaches 100 percent and temperatures hit 38 degrees Celsius is a completely different "kettle of fish." 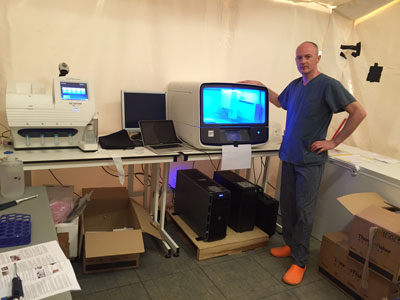 We also had to consider that we were complete novices at this; Dr. Armando Arias, my colleague who helped establish the facility, and myself had never operated a sequencer until March of this year, so it had to be a solution that would work for us. None of the companies we approached were able to send an installation engineer to set up the equipment so we also had to be confident in doing this ourselves as well as being able to repair it should anything go wrong. There were several different options that we discussed, some of which were discounted because they were simply too complicated for us to be confident about being able to install and maintain it. With all these things considered, there really was only one option for us and that was the Ampliseq-Ion Chef-PGM workflow. It’s pretty quick, and actually very sensitive meaning we can sequence samples with relatively low viral loads. The Chef is a fantastic piece of kit. It makes it possible to run the sequencing facility with one, admittedly very hard working, individual. The quality of the data we have obtained is also great and suitable for de novo assembly of new viral genomes, one of the most robust approaches for this type of work.

AB: There are clear benefits to open source sharing of data, do you see this practice becoming more commonplace?
IG: I really do hope so. There are a number of people, including ourselves, that have taken this view however the nature of the scientific career is such that being the first to publish something can have a huge impact on an individual’s career. That competitive side of science has in the most part benefitted the research, however in outbreak scenarios there are more important factors to consider. What is currently lacking is a real framework in which individuals can do this without “fear” that their data will be used by someone else and published in a scientific journal prior to them being able to report a complete story.

Professor Goodfellow was speaking to Ashley Board, Managing Editor for Technology Networks