The Development of Natural Killer Cells for Solid Tumor Treatment

Laura Lansdowne is the managing editor at Technology Networks, she holds a first-class honors degree in biology. Before her move into scientific editing, Laura worked at the Wellcome Sanger Institute and GW Pharma.
Learn about our editorial policies
& Kate Robinson

Kate Robinson is the editorial assistant at Technology Networks. She joined the team in 2021 after obtaining a bachelor's degree in biomedical sciences.
Learn about our editorial policies
Industry Insight

The Development of Natural Killer Cells for Solid Tumor Treatment

Laura Lansdowne is the managing editor at Technology Networks, she holds a first-class honors degree in biology. Before her move into scientific editing, Laura worked at the Wellcome Sanger Institute and GW Pharma.
Learn about our editorial policies
& Kate Robinson

Kate Robinson is the editorial assistant at Technology Networks. She joined the team in 2021 after obtaining a bachelor's degree in biomedical sciences.
Learn about our editorial policies
Natural killer cell binding to a cancer cell.

Currently approved cellular therapies have been shown to effectively treat B-cell cancers, but there remains a significant unmet need for treating other cancers, including solid tumors. Natural Killer (NK) cells are a separate class of lymphocytes that kill target cells without prior antibodies or immunization. Memory NK cells have been shown to be safe and effective in the clinic, with several significant advantages over existing therapies for cancers including acute myeloid leukemia (AML) and multiple myeloma.

Laura Lansdowne (LL): Can you tell us about the universal “off-the-shelf” cell therapy Wugen is developing for the treatment of cancer?

Jan Davidson (JD): NK cells were initially identified in 1970 as a separate class of lymphocytes that can spontaneously (without prior sensitization) kill virally infected or malignantly transformed cells. 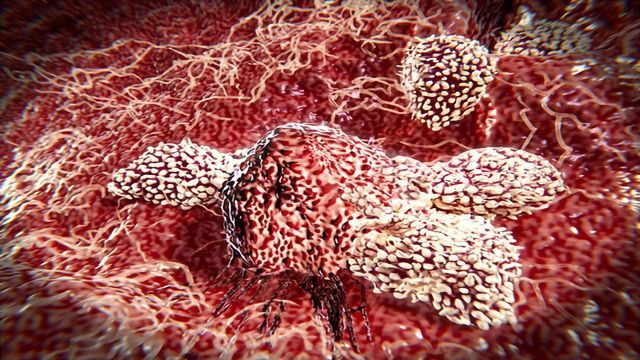 END_OF_DOCUMENT_TOKEN_TO_BE_REPLACED

In 2009, a new subgroup of "memory" NK cells were identified which not only persist in vivo but have a higher capacity for activation upon restimulation compared to the previously identified "conventional" NK cells. The "holy grail" of effective cancer therapies lies in harnessing the inherent and potent ability of NK cells to conduct immunosurveillance and create a readily available therapy for patients with active cancer. Building on the work from Todd Fehniger and Melissa Berrien-Elliott at Washington University, Wugen has devised a way to produce these otherwise difficult to manufacture cells as a potent universal “off-the-shelf” immunotherapeutic.

Kate Robinson (KR): Why are solid tumors not as effectively treated with cellular therapies compared to B-cell cancers?

JD: There are several likely reasons why solid tumors are not as effectively treated as liquid tumors with T-cell therapies.

First, B cells are a natural costimulatory partner for T cells, and solid tumors lack the molecules to drive the requisite response in T cells.

Secondly, solid tumors often have an immunosuppressive, hypoxic, nutrient-poor and dense fibrotic or “stromal” microenvironment which subdues or completely inhibits the T-cell response.

Finally, solid tumors frequently drive an immune-evasion program (i.e., upregulation of checkpoint molecules, human leukocyte antigen downregulation etc.) which allows them to evade T cells, and by the time they are treated with exogenous therapies, the tumor is no longer amenable to a T cell-based therapy.

Memory NK cells could serve to improve on all three of these factors. Memory NK cells are not reliant on B cells for stimulation. They also have an altered metabolic profile compared to T cells, which may enable them to have enhanced functionality within solid tumors. Thirdly, the immune evasion programs that tumors utilize to evade T cells are distinct from those used to evade NK cells, leaving solid tumors vulnerable to NK cells.

LL: You recently announced an agreement with Washington University, can you tell us more about this and how will this impact the Memory NK Cell program?

JD: We recently signed a worldwide, exclusive license agreement with Washington University to access the extensive clinical data generated from multiple clinical trials to be harmonized with the Wugen-sponsored trials. This agreement extends the strong partnership between Wugen and Washington University and increases access to the deep clinical expertise at their Siteman Cancer Center, all of which will help to accelerate the clinical development and bring effective therapies to patients sooner.

KR: Have there been any challenges you have had to overcome during the development of the Memory NK Cell program?

JD: Though memory NK cells have been demonstrated to be safe and efficacious in clinical testing, this was initially tested with fresh cells and dosing one recipient with all  the cells obtained from a single donor. To translate this therapy to many patients, we had to develop methods to expand the numbers of NK cells, and to cryopreserve them while maintaining their strong curative properties. These features allow the memory NK cells to be transported directly to patients worldwide.

To achieve these goals, we have entered into a worldwide exclusive partnership with HCW Biologics to combine our memory NK cell technology with their proprietary manufacturing technology that will ramp up our production of memory NK cells. Importantly, our method of expansion does not require "feeder cells", a cancer cell line that must be removed from the final drug product. We have also internally developed a cryopreservation method that enables recovery of highly functional NK cells after cryopreservation and thawing. Wugen’s expansion and cryopreservation processes solve these significant challenges in the field.

KR: What advantages are there to using memory NK cells to treat cancer over other existing therapeutic approaches?

JD: Several trials conducted at Washington University by Fehniger and Cashen have shown that  memory NK cells are extremely safe and well-tolerated by patients. Unlike other cellular therapies, biologics or cytotoxic chemotherapy, the side effect profile was extremely favorable. Namely, no serious adverse events, cytokine release syndrome, graft versus host disease or neurotoxicity was observed across three independent studies.

In addition, the cells proved to be incredibly durable, active, and effective when explored in the hard-to-treat AML population. Patient response rates of memory NK cells noted in the three studies – relapse refractory AML, as adjunct to hemaotpoietic-cell transplant (HCT), and as salvage therapy post-HCT relapse – were double what would be expected with currently available treatments. We are building on information garnered from those studies to further improve on the current response rates.

LL: Can you elaborate on next steps, in terms of delivering a therapeutic-grade product?

JD: Our primary goal is to move this program from the Wugen research labs into the clinic, and to deliver a therapeutic grade product. We have been focused on scaling up manufacturing to generate sufficient amounts of product to treat patients. Alongside this, we are making sure our teams are implementing all required testing to ensure absolute patient safety. Soon, we plan to apply for approval with the United States Food and Drug Administration (FDA). Once we receive the greenlight from the FDA, we will begin to treat patients with AML and solid tumors as part of our clinical trials.