Imaging technologies have undergone explosive growth over the past few decades and now play a central role in all walks of cancer research. Modern imaging techniques allow clinicians and researchers to not only see where a tumor is located in the body, but also to visualize the expression and activity of specific molecules and biological processes that influence tumor behaviour and/or response to therapy.

In this list, we pay homage to 9 of the most incredible images we’ve seen from the field of cancer research. 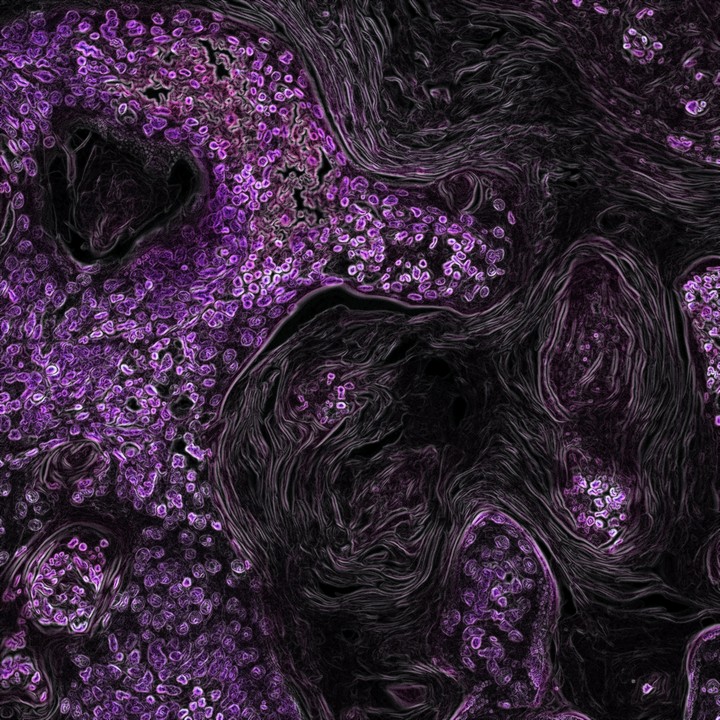 Credit: Eric Snyder, National Cancer Institute \ Huntsman Cancer Institute at the Univ. of Utah
In this image from a genetically engineered mouse model, lung cancer driven by the Kras oncogene shows up in purple. As a key driver in many types of cancer, the Kras gene makes a promising target for new cancer therapies.
2. HeLa cells 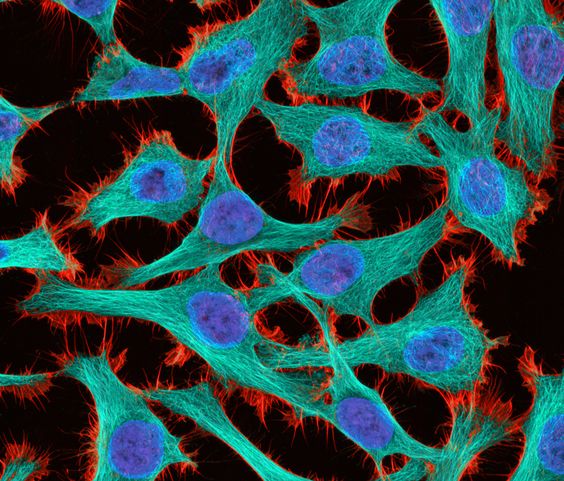 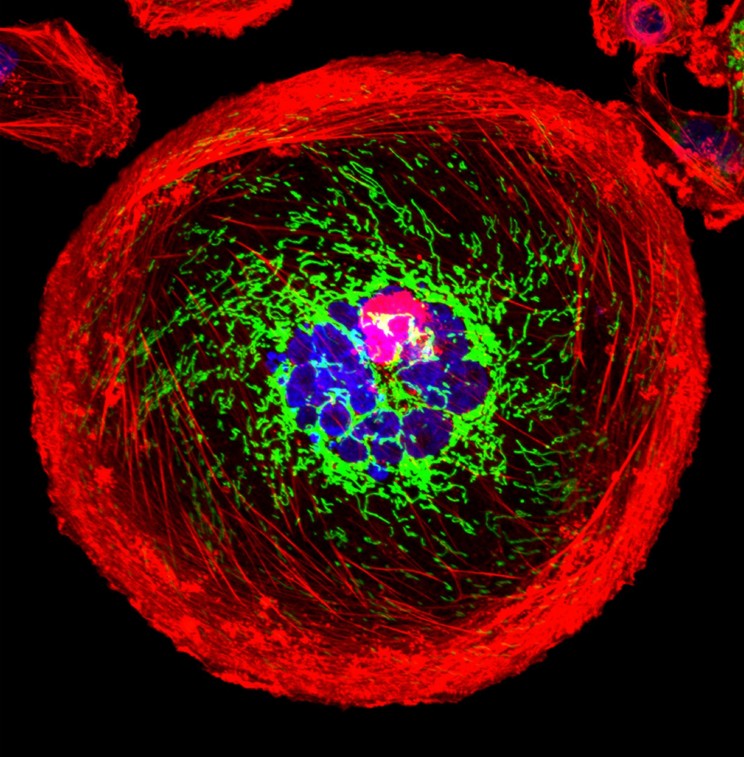 Credit: Wei Qian, National Cancer Institute \ Univ. of Pittsburg Cancer Institute
This image shows a polyploid giant cancer cell (PGCC) from triple-negative breast cancer. PGCCs, a subtype of cancer cell, appear in a variety of solid tumors and appear to help the tumor invade surrounding tissues and migrate to other areas of the body (metastasis). Researchers would like to better understand how PGCCs form and function with the goal of improving treatments. Actin is red; mitochondria are green; nuclear DNA is blue.
4. Neuroblastoma bone marrow metastatic neutrospheres 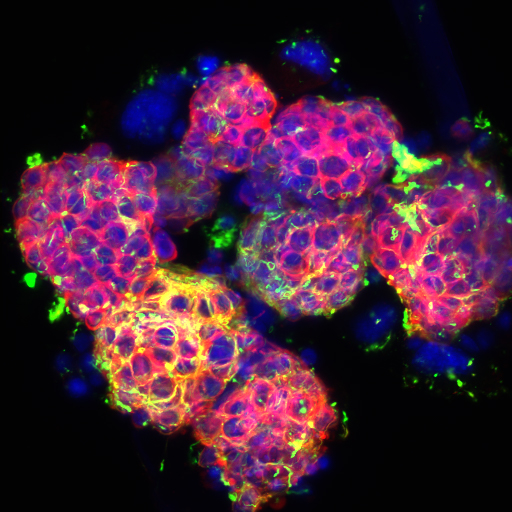 Credit: Dr Orli Yogev, Division of Clinical Studies, Institute of Cancer Research.
3D confocal image of neuroblastoma bone marrow metastatic neutrospheres. This striking image shows neuroblastoma cells from mice which mimic for the first time an aggressive, metastatic form of the disease that has spread to the bone.
5. A developing mouse mammary gland 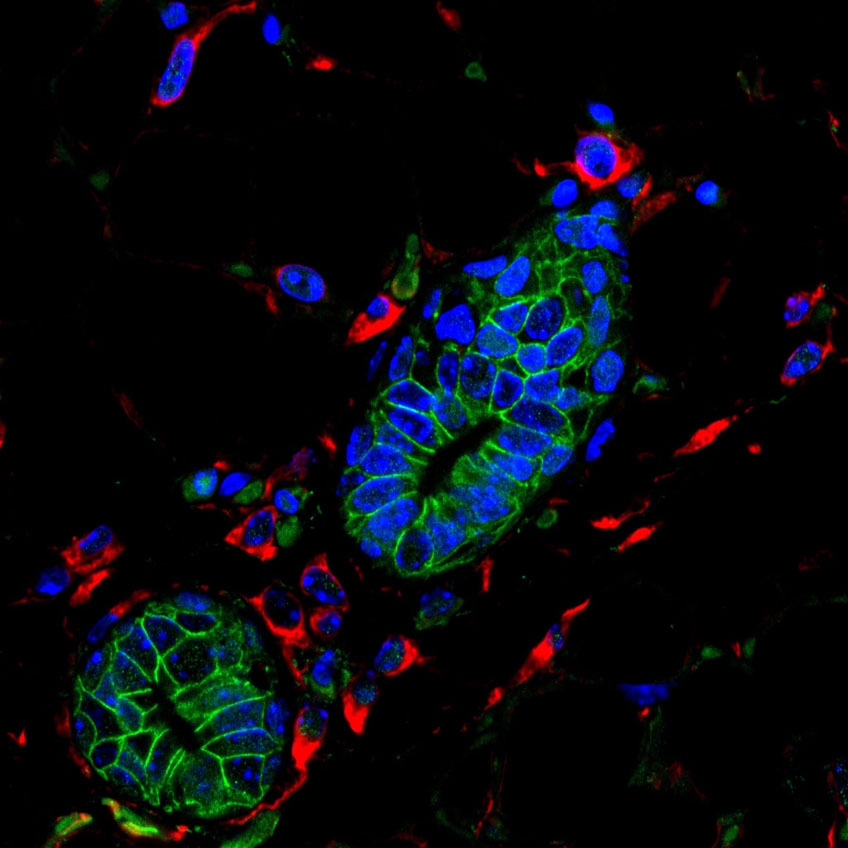 Credit: Rumela Chakrabarti, Satrajit Sinha, Yibin Kang, NIGMS Biomedical Beat.
The image shows a section of a developing wildtype mouse mammary gland immunostained for vimentin (red), beta-catenin (green) and DNA (blue). This is an example of a control image for experiments demonstrating the functions of the Elf5 protein.
6. A blood vessel in a melanoma 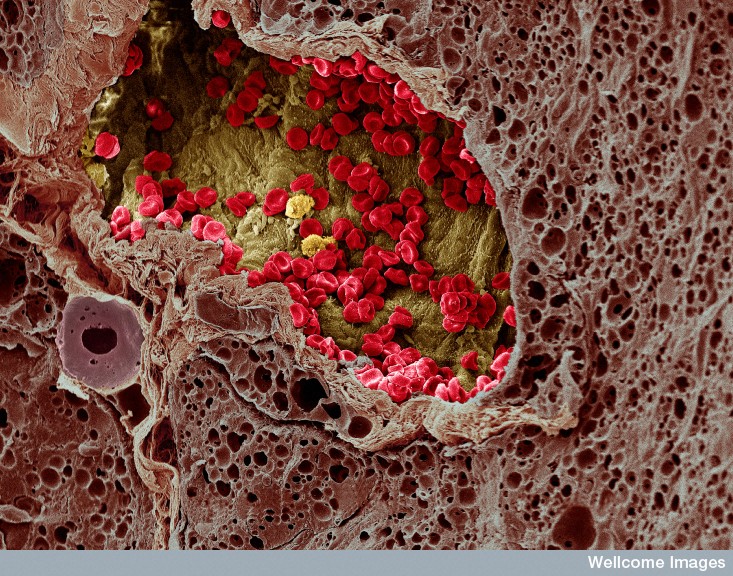 Credit S. Gschmeissner, K. Hodivala-Dilke & M. Stone, Wellcome Images
Colour-enhanced, freeze-fracture scanning electron micrograph of a blood vessel that has grown into a melanoma and is providing nourishment to it. Numerous red blood cells (coloured red) and three white blood cells (coloured yellow) can be seen within the blood vessel (coloured yellow/green). This is surrounded by the melanoma (coloured brown) which is from mouse skin. Horizontal width of image is approximately 230 micrometres.
7. Where tumor cells enter the bloodstream 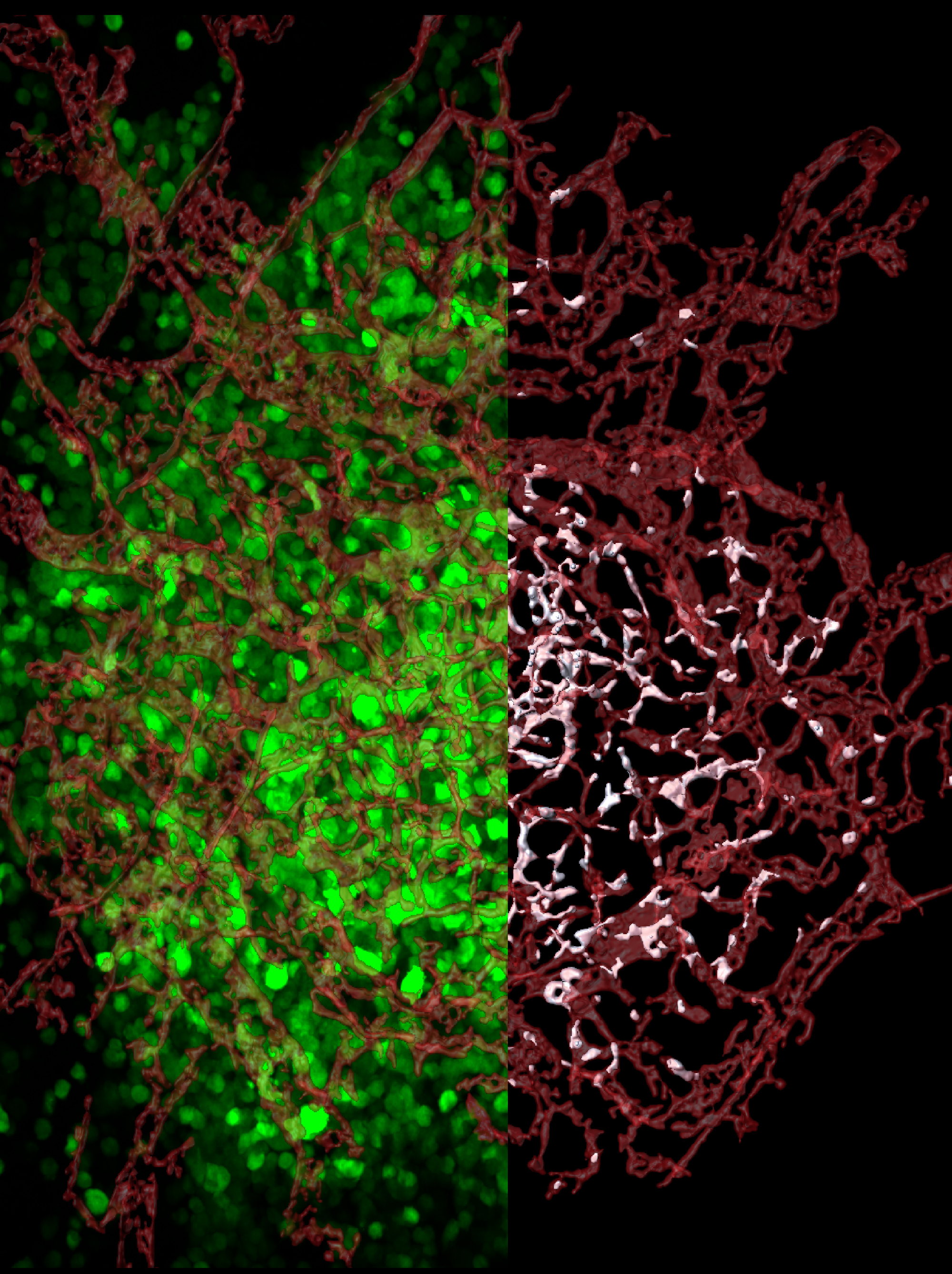 Credit: Elena Deryugina and William Kiosses, Scripps Research Institute.
On the left, stained red blood vessels weave between florescent green tumor cells. On the right, the researchers have mapped exactly where tumor cells (white) have entered blood vessels. The image shows that more cells enter blood vessels in the tumor's core than its invasive border.  Maximum projection images of individual microtumors and tumor-adjacent areas were prepared from z stacks acquired with a confocal Zeiss microscope at 20× or 40×. The z stacks were stitched and rendered 3D to outline and mask the volume of signals for total vasculature and tumor cells.
8. Treating triple negative breast cancer 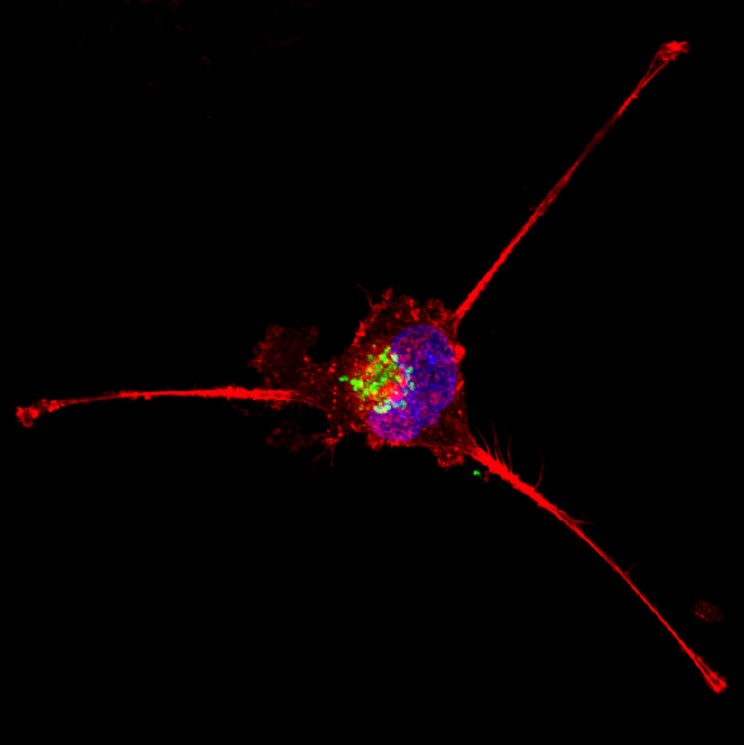 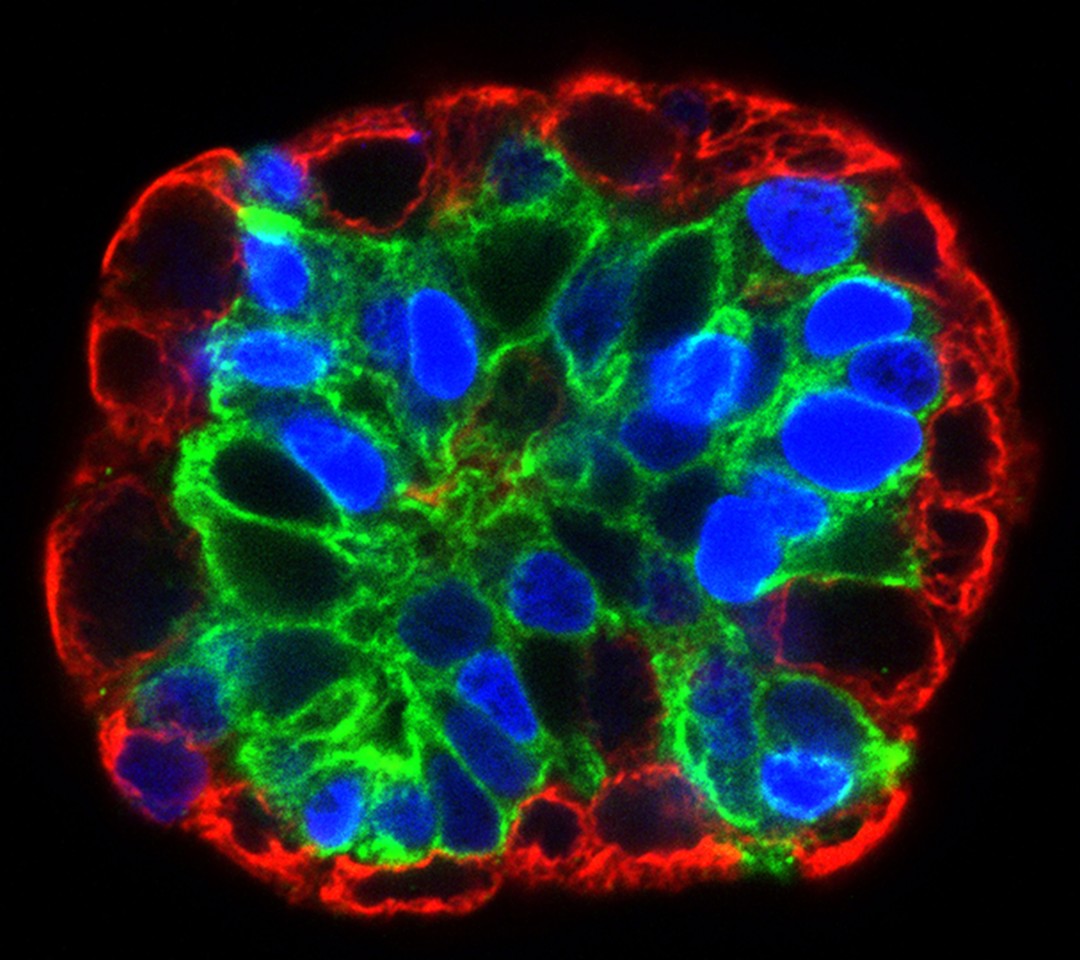 Credit: Geoffrey Wahl, Christopher Dravis, NCI/ Salk Institute
Organoids are miniature versions of organs grown in the lab. Organoid culture systems offer a powerful platform for the development of targeted therapies and precision medicine by letting scientists easily create genetic or environmental changes (difficult or impossible in animal models or human patients) to identify networks of genes that control cellular behaviors that give way to tumors. This image shows an organoid that was grown from a single mammary stem cell. Researchers used this system to demonstrate how a single critical gene, called Sox10 (in blue), controls whether cells turn into dangerous mini "factories", rapidly churning out more copies and variants of themselves. The Sox10 gene allows cells to migrate and to take on characteristics of other cells (plasticity). In cancer cells, these features lead to metastasis and drug resistance. Inner keratin-8+ luminal cells (in green) are surrounded by peripheral keratin-14+ basal cells (in red).
Advertisement

END_OF_DOCUMENT_TOKEN_TO_BE_REPLACED

A number of pollutants found in the air we breathe are known to have harmful effects on human health and the environment. Consequently, correct monitoring of air quality is of great importance.

END_OF_DOCUMENT_TOKEN_TO_BE_REPLACED

Since the earliest microscopy efforts in the 1600s, cell imaging has significantly modernized and become a ubiquitous tool in cell biology laboratories. Here, we cover five key advances in cell microscopy to help you understand how the field is progressing.

END_OF_DOCUMENT_TOKEN_TO_BE_REPLACED

From Research to Entrepreneurship: How One Start-Up Is Working To Optimize IVF Success Rates

END_OF_DOCUMENT_TOKEN_TO_BE_REPLACED

Product and Partnership Development: Why Both Matter for Your Cannabis Company

END_OF_DOCUMENT_TOKEN_TO_BE_REPLACED

Sound-Light Pulses in 2D Materials Observed for the First Time