Complete the form below to unlock access to this Audio Article: "Fighting Cancer with Immune Response" 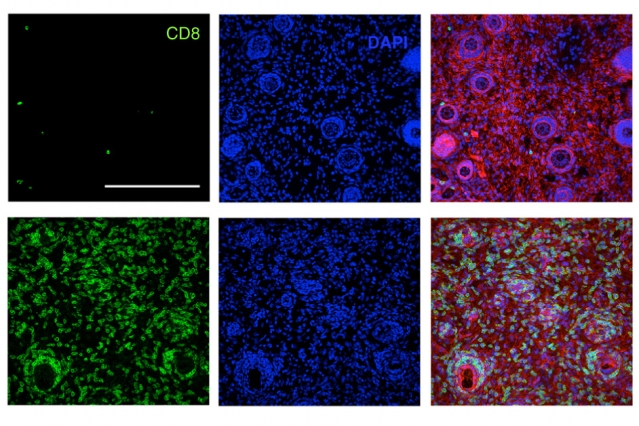 Harnessing the body’s own immune system to destroy tumors is a tantalizing prospect that has yet to realize its full potential. However, a new advance from MIT may bring this strategy, known as cancer immunotherapy, closer to becoming reality.

In the new study, the researchers used a combination of four different therapies to activate both of the immune system’s two branches, producing a coordinated attack that led to the complete disappearance of large, aggressive tumors in mice.

“We have shown that with the right combination of signals, the endogenous immune system can routinely overcome large immunosuppressive tumors, which was an unanswered question,” says Darrell Irvine, a professor of biological engineering and of materials science and engineering, and a member of MIT’s Koch Institute for Integrative Cancer Research.

This approach, which could be used to target many different types of cancer, also allows the immune system to “remember” the target and destroy new cancer cells that appear after the original treatment.

Irvine and Dane Wittrup, the Carbon P. Dubbs Professor of Chemical Engineering and Bioengineering and a member of the Koch Institute, are the senior authors of the study, which appears in the Oct. 24 online edition of Nature Medicine. The paper’s lead authors are MIT graduate student Kelly Moynihan and recent MIT PhD recipient Cary Opel.

Tumor cells often secrete chemicals that suppress the immune system, making it difficult for the body to attack tumors on its own. To overcome that, scientists have been trying to find ways to provoke the immune system into action, with most focusing their efforts on one or the other of the two arms of immunity — the innate immune system and the adaptive immune system.

The innate system consists of nonspecific defenses such as antimicrobial peptides, inflammation-inducing molecules, and cells such as macrophages and natural killer cells. Scientists have tried to get this system to attack tumors by delivering antibodies that latch onto tumor cells and recruit the other cells and chemicals needed for a successful attack.

Last year, Wittrup showed that delivering antibodies and IL-2, a signaling molecule that helps to boost immune responses, could halt the growth of aggressive melanoma tumors in mice for as long as the treatment was given. However, this treatment worked much better when the researchers also delivered T cells along with their antibody-IL2 therapy. T cells — immune cells that are targeted to find and destroy a particular antigen — are key to the immune system’s second arm, the adaptive system.

Around the same time, Irvine’s lab developed a new type of T cell vaccine that hitches a ride to the lymph nodes by latching on to the protein albumin, found in the bloodstream. Once in the lymph nodes, these vaccines can stimulate production of huge numbers of T cells against the vaccine target.

After both of those studies came out, Irvine and Wittrup decided to see if combining their therapies might produce an even better response.

“We had this really good lymph-node-targeting vaccine that will drive very strong adaptive immunity, and they had this combination that was recruiting innate immunity very efficiently,” Irvine says. “We wondered if we could bring these two together and try to generate a more integrated immune response that would bring together all arms of the immune system against the tumor.”

The resulting treatment consists of four parts: an antibody targeted to the tumor; a vaccine targeted to the tumor; IL-2; and a molecule that blocks PD1, a receptor found on T cells. Each of these molecules plays a critical role in enhancing the overall immune response to the tumor. Antibodies stimulate the recruitment of additional immune cells that help to activate T cells; the vaccine stimulates proliferation of T cells that can attack the tumor; IL-2 helps the T cell population to expand quickly; and the anti-PD1 molecule helps T cells stay active longer.

The researchers tested this combination treatment in mice that were implanted with three different types of tumors — melanoma, lymphoma, and breast cancer. These types of engineered tumors are much more difficult to treat than human tumors implanted in mice, because they suppress the immune response against them.

“To our knowledge, nobody has been able to take tumors that big and cure them with a therapy consisting entirely of injecting biomolecular drugs instead of transplanting T cells,” Wittrup says.

“Exploiting the existing, endogenous, normal T cell repertoire of the tumor-bearing mouse (or human) overcomes the need for T cell transfer, making the therapy more readily applicable in the clinic,” says Willem Overwijk, an associate professor at MD Anderson Cancer Center, who was not involved in the research.

“Overall, this is a highly sophisticated, cleverly engineered combination therapy with many unique properties that result in very powerful anti-tumor activity,” Overwijk says. “After celebrating this exciting achievement, much work remains to be done to translate the learned lessons and observed principles into a therapeutic for patients with cancer.”