'Google Maps' for the Cancer Genome

'Google Maps' for the Cancer Genome

Complete the form below to unlock access to this Audio Article: "'Google Maps' for the Cancer Genome"

In some ways, studying the genetics of cancer has been like examining the individual tiles on a mosaic, says David C. Schwartz, a professor of genetics and chemistry at the University of Wisconsin-Madison. To make his point, he brings his face close to the table where he sits - his mosaic for the purpose of illustration - and describes the details of each imaginary tile.

"I can get an accounting of the tiles," he says, "but I can't see the whole picture because I can't step back far enough."

In a new study published Schwartz and his research team, spearheaded by recently minted Ph.D. Aditya Gupta, describe a new approach for studying the cancer genome that Schwartz says will let scientists account for both the individual tiles and the whole mosaic. It enables researchers and clinicians to look at the small- and large-scale genetic changes that define individual cancers. 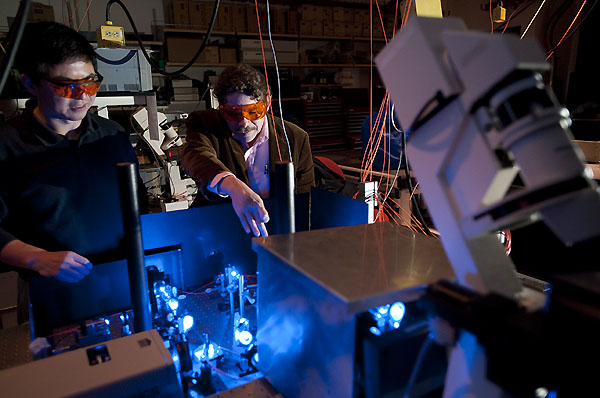 Researchers at the University of Wisconsin Madison

By using the approach in the study, the researchers describe unique genomic features of a tumor from a patient with multiple myeloma and identify potential new drug targets for the treatment of this incurable blood cancer.

"Cancer genomes are complicated but we found that, using an approach like this, you can begin to understand them at every level," Schwartz says.

Put another way, the approach is like creating a Google Maps for cancer. It could allow scientists and clinicians to zoom in for a "street view" of individual changes in the genetic alphabet of cancer, or zoom out for a more Google Earth-style perspective of whole genome changes and everything in between. It could allow them to examine changes in a patient's cancer over the progression of the illness, monitor for signs of drug resistance, and fine-tune treatments, Schwartz says.

While the study does not carry statistical power - only one patient's tumor was analyzed - it opens the door for others to test what the researchers found. It also demonstrates the potential of the approach, which combines a system Schwartz invented, called optical mapping, with more traditional genetic tools like DNA sequencing.

The genome is the full complement of DNA of an individual plant, animal, human, or cancer cell, including the genes and all of the material in between (which was once erroneously called junk DNA). The cancer genome is riddled with mutations that render it not only different from the rest of the cells in the human body but also often harmful.

Multiple myeloma in particular is characterized by widespread changes in the genome over the course of disease, says study co-author, Fotis Asimakopoulos, professor of medicine and a multiple myeloma researcher and physician at the UW-Madison School of Medicine and Public Health.

In the approach, researchers obtained tumorous and noncancerous samples from a patient with multiple myeloma at two different times: at a stage of illness where the cancer was responsive to drug treatment and after it had progressed and was resistant to chemotherapy.

They performed standard DNA sequencing to read each of the single letters spelling out the genomic code of the cancer, yielding small pieces of information like the individual tiles of a mosaic, or the zoomed-in section of a map.

Then, isolating individual DNA molecules from the cancer, the researchers performed optical mapping in a unique facility at the UW-Madison Biotechnology Center, where Schwartz is also affiliated.

In that system - which Schwartz used as part of the team that first elucidated the complex genome of maize in 2009 - single strands of DNA are stretched out and placed in a special device. The strands are given specific landmarks, like tabs in a book, and marked with a fluorescent dye. An automated system takes images of each of these marked segments, cataloging the molecules barcode-like into large datasets that are then pieced together like a jigsaw puzzle to provide a zoomable view of a genome.

The research team then layered the two together, assembling the "tiles" from DNA sequencing and then stepping back to see the full mural with optical mapping, providing a comprehensive view of the patient's multiple myeloma genome.

"It's a rare, near-complete characterization of the complexity of a myeloma genome, from the smallest variance all the way to big chunks of chromosomal material that differ between the tumor DNA and the normal DNA of the patient," Asimakopoulos says.

Schwartz says the approach allowed them to see that, compared to the patient's noncancerous genome, and across the two cancer time points, the multiple myeloma genome was marked by an increase in notable mutations and larger-scale changes. Not only were there more unusual tiles in the mosaic (mutations) as the cancer progressed, but whole sections of tiles were removed, flipped around, or even inserted.

"Accounting for individual tiles wouldn't tell you anything about that and that's why you need a comprehensive view," he says. "You want every single base, but you also want the local and global order as correct as possible, and that's what we've done here."

In the study, the researchers highlight the changes they believe are most worthy of further exploration and that yield the greatest potential for future therapies. While new drug treatments have improved the survival rate for patients with multiple myeloma in recent decades, the cancer almost always becomes resistant to treatment, leading to poor outcomes for patients over time. The researchers hope this approach could help prevent drug resistance altogether, or help scientists and physicians develop ways to work around it.

"To cure myeloma, we need to understand how genomes evolve with progression and treatment," says Asimakopoulos. "The more we can understand the drivers in cancer in significant depth, and in each individual, the better we can tailor treatment to each patient's disease biology."

We have entered an era focused on more personalized, precision medicine, both he and Schwartz say, and this approach is a step toward better achieving that. Asimakopoulos is taking some of the findings from the study back to his lab, and Schwartz would like to see the system used to map individual patient cancer genomes over the course of their disease.

"Instead of Grade 1, we can say, 'This is Joe's myeloma, and given this list of mutations and other info, this is the treatment,'" he says. "No two myeloma are alike."

Schwartz continues to work toward ways to advance the system, making it higher-resolution, more cost-effective and scalable. Ultimately, he'd like to build a system capable of analyzing 1,000 genomes - cancerous or otherwise - in 24 hours.

He also wants to continue to build the capacity of the university to perform meaningful human studies, to harness and link the tools of physics, chemistry, biology, bioinformatics and medicine to change outcomes for patients. He sees UW-Madison becoming a national or even international center for this kind of work.

"I like to look at problems and get down and dirty; I'll a take hammer and hatchet to them, tie them up, put a match to them - anything to get an answer," he says. "I just adore being able to take what we do - the physics, the microscopy, the chemistry - and use them to have a real impact on human biology."