How to Wake a Sleeping Cancer Cell

How to Wake a Sleeping Cancer Cell

In a world first, researchers from the Garvan Institute of Medical Research have used state-of-the-art microscopy techniques to watch cancer cells sleep within living bone over a period of months. They show that cancer cells can be 'woken up' when bone tissue is broken down around them, suggesting new possibilities for treating metastatic cancer in bone.

In several cancers (including breast and prostate), cancer cells can spread from the original tumour site into bone. Once there, they settle in 'for the long haul', remaining inactive for months or even many years. Eventually, though, some of these cells can 'wake up' and begin dividing, forming secondary cancers (or metastases) in bone and dramatically worsening the prognosis of cancer patients.

"Once a cancer spreads to bone, it becomes notoriously difficult to treat," says Professor Peter Croucher, Head of Garvan's Bone Biology Division and the study's lead investigator. "So, it's important to establish exactly what wakes those cells in bone. Is it some signal within the cells themselves, or is it a change in their environment? 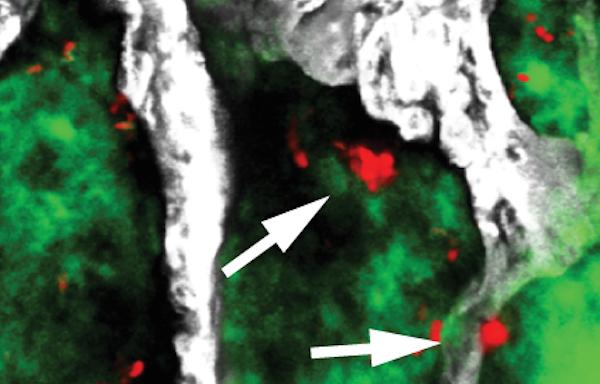 "You could compare it to how we ourselves wake in the morning. Some of us wake naturally, but others need an external signal, whether it's an alarm clock or sunshine streaming through the window."

The research team set out to discover which scenario holds true for cancer cells in bone.

Using a groundbreaking technique called intravital two-photon microscopy, the researchers tracked the fate of sleeping cancer cells in the tibia (the main bone in the long part of the leg) of a living mouse. They introduced cells from multiple myeloma (a cancer of blood cells that arises in bone) into the mouse, and watched as a small number of the cells lodged in the tibia and 'went to sleep'. These vanishingly rare sleeping cells could be detected because they contained a fluorescent dye that was lost rapidly from dividing (wakeful) cells.

Dr Tri Phan, who co-led the study, says, "Because we were looking at a long bone like a tibia (rather than the skull, which is more commonly studied), we could watch the same sleeping cancer cells, in the same bone, in the same mouse, over a long period of time - and this is something that hasn't been done before."

Prof Croucher says that studying the same set of cells over a period of months gave vital clues about what caused them to reactivate. "Because we've done it this way, we can show that there are a great many dormant cells - yet only some of them get woken up, and those that do wake, wake at different times. We even saw some cells that woke then went back to sleep again.

"The fact that these myeloma cells behave so differently, despite coming from the same cancer cell line, gave us our first clue that it is a signal from outside the cells that is controlling when they wake."

The next challenge was to work out the precise nature of the 'wake-up call' from bone. Dr Michelle McDonald, a bone biologist on the research team, says, "In this study, we've shown that bone's dynamic process of building up and breaking down can send signals to cancer cells to stay sleeping or to wake.

"We were able to show that myeloma cells are usually kept asleep by close association with a layer of osteoblast-like cells, called bone-lining cells, in the endosteum (an internal surface within bone). The bone-lining cells are essentially inactive, so we can think of them as providing a quiet environment in which myeloma cells sleep undisturbed.

"Crucially, we can wake those myeloma cells by activating osteoclasts, which break down bone tissue. We think the osteoclasts are physically changing the local environment of the cancer cells and waking them up in the process - as if they were literally throwing them out of bed.

What does this mean for treating secondary cancers in bone? Prof Croucher says, "Now we can see that the cancer cells are woken by changes in the surrounding bone, we can think in a whole new way about treating bone metastasis - and there are two treatment approaches in particular that have promise.

"The first is that we could inhibit the breakdown of bone by osteoclasts so as to keep cancer cells in long-term hibernation. In fact, there are already drugs that can do this, such as bisphosphonates (used to protect bone in individuals with osteoporosis), and there's already evidence that these drugs do improve survival in breast cancer patients.

"The other, more radical, option is to do the opposite - to wake the sleeping cells by activating osteoclasts and driving the breakdown of bone. Most cancer treatments target active, dividing cells, so waking the sleeping cells should make them susceptible to those therapies - and, ultimately, could eradicate any residual disease."