Scientists at the Helmholtz-Zentrum Dresden-Rossendorf (HZDR), in cooperation with colleagues at the University of Zurich and the Ruhr-Universität Bochum, have for the first time successfully tested a new tumor diagnosis method under near-real conditions. The new method first sends out an antibody as a "spy" to detect the diseased cells and then binds to them. This antibody in turn attracts a subsequently administered radioactively labeled probe. The scientists could then clearly visualize the tumor by utilizing a tomographic method. This procedure could improve cancer treatment in the future by using internal radiation. 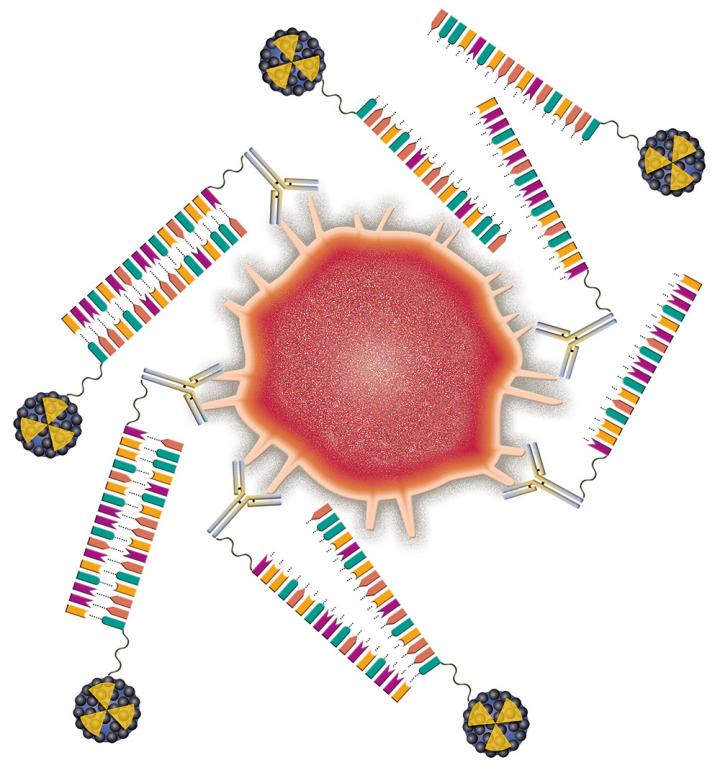 The human immune system forms antibodies that protect the body from pathogens. Antibodies can also, however, be produced in a laboratory to precisely bind to tumor cells. They are used in cancer research to detect and fight malignant tumors. For example, antibodies can serve as transport vehicles for radionuclides, with which the affected regions can be visualized or can even be damaged. Until recently, a stumbling block has been their large molecular mass. "This causes them to circulate in the body for too long before they reach the diseased cells," explains Dr Holger Stephan from the Institute of Radiopharmaceutical Cancer Research at HZDR. "This is a disadvantage because organs that are not affected by the disease are exposed to radiation. It also makes the exact localization of the tumor in the body more difficult because the resulting images are less sharp."

Together with colleagues at the University of Zurich and the Ruhr-Universität Bochum, the researchers from Dresden therefore chose an alternative strategy. "By using what is known as 'pre-targeting', the antibodies' task is divided into two steps," Dr Kristof Zarschler, a member of Stephan's team, explains. "In a figurative sense, we first send spies out in advance, over a longer period of time, to scout out the enemy - the tumor cells. The 'spies' then share their position with their troops, which we subsequently send out so that they will directly reach their target with the radioactive material." The researchers fall back on the cetuximab antibody as the scout, which binds selectively to the epidermal growth factor receptor (EGFR). In various types of tumors, there is an increase in this molecule's formation or it might be found in a mutated form, which then leads the cells to grow and multiply uncontrolled.

The Dresden researchers combined the antibody with a peptide nucleic acid (PNA) derivative which Prof Gilles Gasser and Prof Nils Metzler-Nolte developed together with their respective working groups in Switzerland and Germany. "It is a very stable synthetic variant of DNA," says Holger Stephan. "Similar to a single strand of DNA, it consists of a certain sequence of the four organic bases. Complementary PNA with matching sequence binds to it in a highly precise and stable manner." During their experiments, the scientists first injected the PNA-EGFR antibody into tumor-bearing mice and gave this "spy" time to accumulate at the tumor site. They then administered the PNA counterpart, labeled with the radioactive substance technetium-99m. "Images we took using single photon emission computed tomography show that both the antibody and its counterpart located each other quickly," says Zarschler, pleased with the results.

The tumor could thus be clearly visualized within a short period of time. "Furthermore, the radioactively labeled probes had already disappeared from the bloodstream after sixty minutes," explains Holger Stephan. "This minimizes radioactive exposure risk of healthy body tissue. By pre-targeting, we can overcome limitations of conventional, radioactively marked antibodies." According to the researchers, it will, however, take some time before the combination of PNA antibodies and their matching PNA counterparts can be used in diagnosing tumors in humans.

"Our results however show that the PNAs we tested are suitable candidates for further preclinical studies," Stephan sums up. They could provide new possibilities not only for visualizing diseased cells but also for fighting them. "If the method is proven to work, it could also be used to transport therapeutically effective radioactive substances to the tumor in order to irradiate it from within and ultimately damage it."