Complete the form below to unlock access to this Audio Article: "New Molecule Could Improve Cancer Immunotherapy’s Effectiveness and Accessibility "

A collaborative research team has synthesized a molecule that could be used as an alternative to the antibodies used in immunotherapy treatment for cancer. The study is published in the Journal for ImmunoTherapy of Cancer.

Immunotherapy – sometimes referred to immuno-oncology – is an approach to treating cancer that harnesses the body’s immune system. Over recent years, immunotherapy has been established as a successful treatment for several forms of cancer. Patients with over 12 types of cancer can receive immunotherapies approved by the U.S. Food and Drug Administration. In 2016–2017, the largest single-year decrease in cancer death rates was recorded in the United States.

Why harness the immune system to treat cancer? 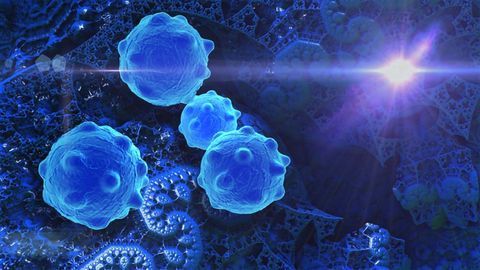 END_OF_DOCUMENT_TOKEN_TO_BE_REPLACED

The history of immunotherapy as a cancer treatment can be traced back to the early 2000s, when several studies emphasized a connection between the immune system and cancer development – a theory that had been considered for many years, but not scientifically proven.

In 2018, researchers James Allison and Tasuku Honjo received the Nobel Prize in Medicine or Physiology for their contribution to the development of immunotherapy. "Honjo discovered that immune cells called T cells express the protein PD-1 that disables the T-cells' own activity when it binds to the protein PD-L1 expressed in cancer cells. In fact, the interaction between PD-1 and PD-L1 allows cancer cells to paralyze the T cells, preventing them from attacking the cancer cells,” Professor Ronit Sachi-Fainaro, head of the Center for Cancer Biology Research and the Laboratory for Cancer Research and Nanomedicine at the Sackler Faculty of Medicine, Tel Aviv University, said.

Honjo was able to produce antibodies that can neutralize either PD-1 or PD-L1, releasing the T cells to fight the cancer cells. Many of these antibodies are now utilized in modern immunotherapies However, they can be expensive to manufacture and are not effective in all cancer types. Solid tumors can be difficult to target via antibody-based therapy, as the antibodies are large and unable to penetrate deep into the tumor.

Sachi-Fainaro and colleagues and collaborators at the University of Lisbon have used an array of techniques, including bioinformatics and data analysis systems, to identify alternative molecules that could substitute these antibodies.

"Post-doctoral researcher Dr. Rita Acúrcio started with thousands of molecular structures, and by using computer-aided drug design (CADD) models and databases, we narrowed down the list of candidates until we reached the best structure," said Satchi-Fainaro.

Next, the researchers confirmed that the molecule they identified could control tumor growth in an effective manner, like the antibodies engineered by Honjo. Indeed, this was the case. The molecule was found to inhibit PD-L1 in mouse models that were engineered to express humanized T cells. “In other words, we have developed a molecule that can inhibit PD-1/PD-L1 binding and remind the immune system that it needs to attack the cancer,” Satchi-Fainaro added.

The molecule carries several advantages over the antibodies currently used. “First of all, the cost: since the antibody is a biological rather than synthetic molecule, it requires a complex infrastructure and considerable funds to produce,” Satchi-Fainaro explained. In contrast, the synthetic molecule discovered by the researchers can be synthesized using simplistic equipment in a short period of time, at a fraction of the cost. “Another advantage of the small molecule is that patients will probably be able to take it at home, orally, without the need for intravenous administration in the hospital,” Satchi-Fainaro said.

The new molecule is not only accessible to produce, but the research teams’ preliminary experiments suggest that it can actually improve the activation of immune cells within solid tumors. “The surface area of a solid tumor is heterogeneous,” said Satchi-Fainaro. "If there are fewer blood vessels in a particular area of the tumor, the antibody will not be able to get inside. The small molecule, on the other hand, diffuses, and is therefore not entirely dependent on the tumor's blood vessels or on its hyperpermeability. I believe that in the future, the small molecule will be commercially available and will make immunotherapy affordable for cancer patients."

This article is a rework of a press release issued by Tel Aviv University. Material has been edited for length and content.