New Tumor Maps Give an Unprecedented Look at Colorectal Cancers

In the United States, turning 45 brings with it a rather unpleasant rite of passage: the beginning of regular colonoscopies, in which an endoscope equipped with a light and a camera is used to visually check the colon for signs of cancer. Relatively slow-growing, colorectal cancer can often be treated surgically if caught early. However, it becomes more difficult to treat the longer it lurks undetected, making it the fourth leading cause of cancer-related deaths in the country.

Despite the availability of this highly visual screening process, treatment decisions for individual patients are still largely guided by traditional histology — pathologists assess colorectal cancer by examining slides of tumor samples under a microscope.

Now, a team at Harvard Medical School has combined histology with cutting-edge single-cell imaging technologies to create large-scale 2D and 3D spatial maps of colorectal cancer. The maps, described in Cell, layer extensive molecular information on top of histological features to provide new information about the structure of the cancer, as well as how it forms, progresses, and interacts with the immune system.

“Our approach provides a molecular window into 150 years of diagnostic pathology — and reveals that many of the elements and structures traditionally thought to be isolated are actually interconnected in unexpected ways,” said co-senior author Peter Sorger, the Otto Krayer Professor of Systems Pharmacology in the Blavatnik Institute at HMS. “An analogy is that before we were just looking at the tail or the foot of the elephant, but now, for the first time, we can start to see the whole elephant at once.”

The maps are part of the team’s broader efforts to create atlases for different cancer types that will be freely available to the scientific community as part of the National Cancer Institute’s Human Tumor Atlas Network. Previously, the researchers used a similar approach to create in-depth maps of early-stage melanoma, and maps for other cancers are already in development. Ultimately, the team hopes that these cancer atlases will propel research and improve diagnosis and treatment. 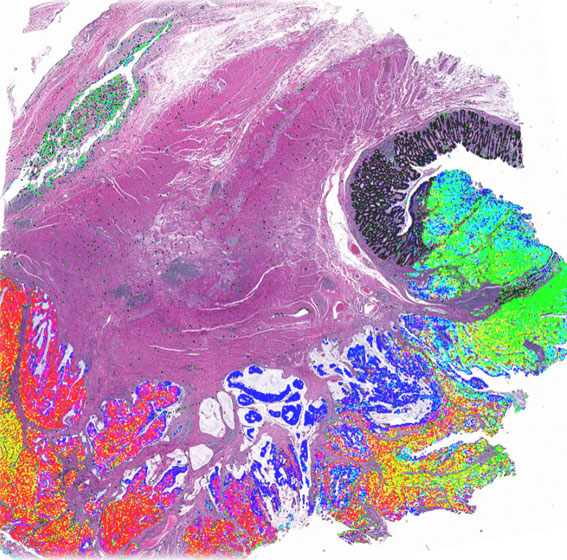 Histology has long been the cornerstone of cancer diagnosis and treatment: Pathologists examine a tumor sample stained with hematoxylin and eosin (H&E) under a microscope and pick out key features to determine the grade and stage of the cancer. This information is used by oncologists to develop a treatment plan, which usually involves some combination of surgery, drugs, and radiation. H&E-based histology is relatively simple, cheap, fast, and can reveal a lot about a tumor.

However, traditional histology has its limits — namely, it doesn’t capture a cancer’s molecular makeup or physical structure, which makes it difficult to fully take advantage of the information cancer researchers have gained over the past 50 years.

“Histology is extremely powerful, but we often don't know what it means in modern molecular terms,” Sorger said.

In the new paper, the researchers combined histology with single-cell molecular imaging data acquired through a multiplexed imaging technique called cyclic immunofluorescence, or CyCIF. They used this information to create detailed 2D maps of large regions of colorectal cancer. First author Jia-Ren Lin, platform director in the Laboratory of Systems Pharmacology at HMS, led an effort to stitch these maps together to form a large-scale 3D reconstruction of a tumor.

“Our maps include information on almost 100 million cells from large pieces of tumors, and provide a rather unprecedented look at colorectal cancer,” Santagata said. They allow researchers to start asking key questions about differences between normal and tumor tissues and variation within a tumor, he added, and reveal “exciting architectural features that had never been observed before, as well as molecular changes associated with these features.”

The maps showed that a single tumor can have more and less invasive sections, and more or less malignant-looking regions — resulting in histological and molecular gradients where one part of a tumor transitions into the next.

“Within each tumor, there is a wide range of properties of colorectal cancer — we see many different regions and neighborhoods that have distinct characteristics, as well as the transitions between them,” Santagata said. From here, he added, scientists can now explore what drives these differences within individual tumors.

For example, the maps showed that immune environments varied dramatically within a single tumor.

“They were as different across a single tumor as among tumors — which is important because tumor-immune interactions are what you are trying to target with immunotherapy,” Sorger said. Similar to their finding in melanoma, the researchers observed that the T cells tasked with fighting off the cancer were not directly suppressed by tumor cells, but rather by other immune cells in the environment around the tumor.

“This gives us a whole new appreciation for how diverse and plastic the tumor environments are — they are rich communities, and we are now better equipped to figure out how they develop,” Santagata said.

The maps also provided new insights into the architecture of the tumors. For example, scientists had previously identified what they thought were 2D pools of a mucus-like substance called mucin with clusters of cancer cells floating inside. However, in the new study, the 3D reconstruction revealed that these mucin pools are, in fact, a series of caverns interconnected by channels, with finger-like projections of cancer cells.

“It’s a wild, new look at these tumor structures that we never really appreciated before,” Santagata said. “Because we can see them in 3D, we have a crisp, clean view of the structures, and we can now study why they are there, how they form, and how they shape tumor evolution.”

Ultimately, the goal of these colorectal cancer maps is the same as it is for all of the cancer atlases the team is developing: to advance research and improve diagnosis and treatment. Precision medicine, which involves tailoring therapy to an individual patient’s cancer, is becoming an increasingly important part of treatment, Sorger noted, yet it can go only so far with pathology and genetics alone.

“The big translational story here is building the knowledge to make precision medicine practical for most patients,” he said. “We are currently working with Brigham and Women’s and the Dana-Farber Cancer Institute to determine how our methods can be used in a clinical setting.”

“This is allowing us to extract a whole additional layer of molecular and structural features that we think will provide diagnostic and prognostic information and improve our ability to target these cancers,” Santagata added.

Now, the researchers want to further refine their ability to create 3D reconstructions of tumors and continue integrating new imaging technologies into their maps. They also want to build a bigger cohort of colorectal cancer samples for mapping and explore the basic biology of the disease that their maps have highlighted. 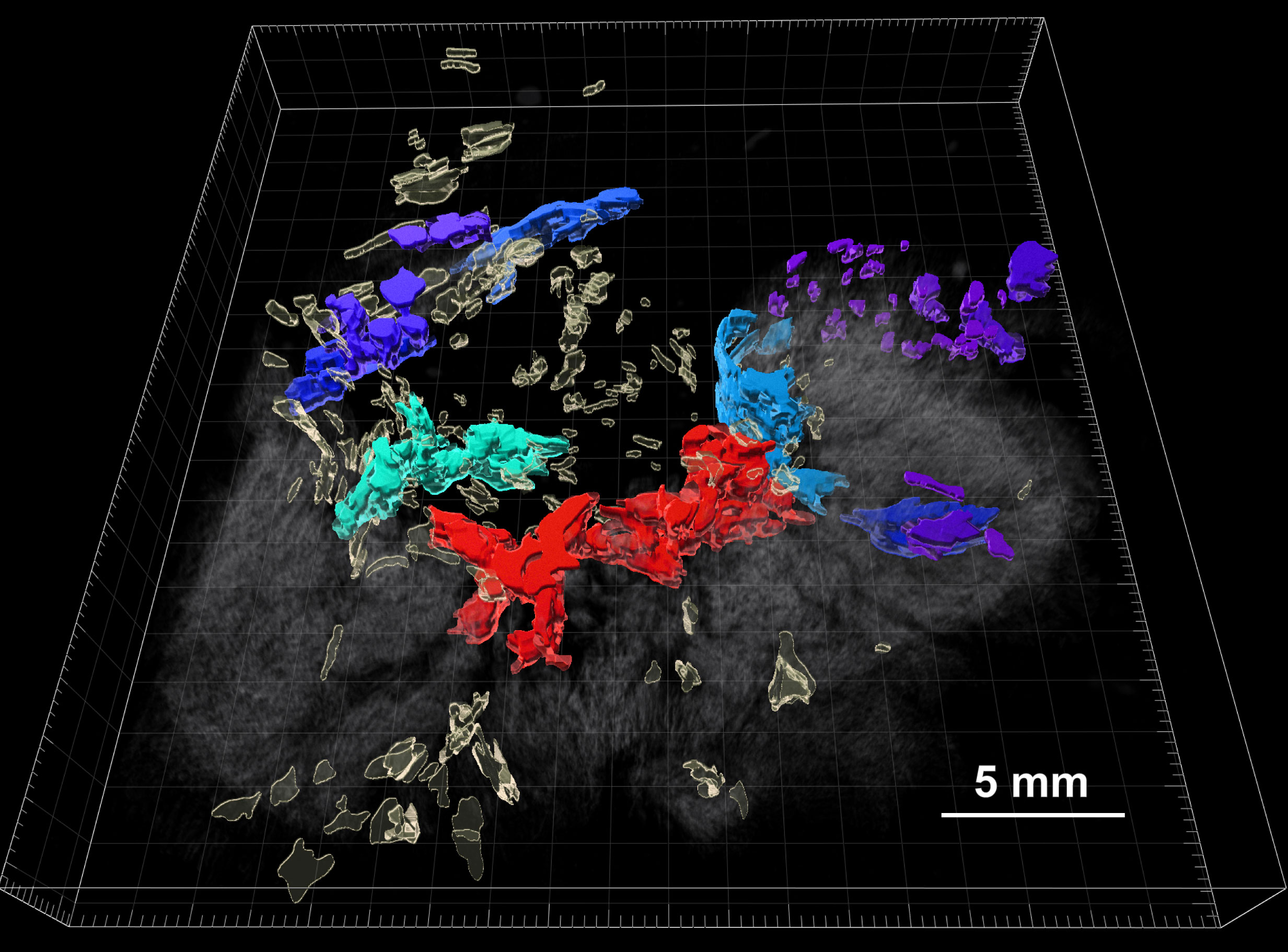 “This was an extraordinarily close conversation between the computational group and the pathology group, going back and forth between the rich history of medicine known to pathologists and modern machine learning methods.” Sorger said. “I think it’s an exciting glimpse of how these computation methods can be used in medicine in the future, wherein you tightly couple biologists and physicians with computation, rather than seeing them as replacements for each other.”

The team chose melanoma and colorectal cancer as a starting point because they are common cancers with unmet medical needs that consist of large, solid tumors and require important treatment decisions. Next, the researchers plan to tackle breast cancer and brain cancer. They also want to train other scientists to use the imaging technologies to build their own cancer maps, which would pave the way for the creation of even more atlases.

“A new era in molecular pathology is beginning, and this is a deep look at a tumor that is showing us how remarkable the findings can be,” Santagata said.