A new study led by UC Santa Cruz researchers has found that a protein associated with cancer cells is a powerful suppressor of the biological clock that drives the daily ("circadian") rhythms of cells throughout the body. The discovery adds to a growing body of evidence suggesting a link between cancer and disruption of circadian rhythms, while offering new insights into the molecular mechanisms of the biological clock.

The ticking of the biological clock drives fluctuations in gene activity and protein levels that give rise to daily cycles in virtually every aspect of physiology in humans and other animals. A master clock in the brain, tuned to the daily cycle of light and dark, sends out signals that synchronize the molecular clocks ticking away in almost every cell and tissue of the body. Disruption of the clock has been associated with a variety of health problems, including diabetes, heart disease, and cancer.

According to Carrie Partch, a professor of chemistry and biochemistry at UC Santa Cruz and corresponding author of the paper, the connection between clock disruption and cancer is still unclear. "The clock is not always disrupted in cancer cells, but studies have shown that disrupting circadian rhythms in mice causes tumors to grow faster, and one of the things the clock does is set restrictions on when cells can divide," she said. 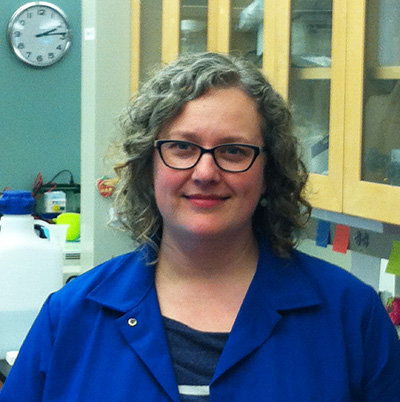 The new study focused on a protein called PASD1 that Partch's collaborators at the University of Oxford had found was expressed in a broad range of cancer cells, including melanoma, lung cancer, and breast cancer. It belongs to a group of proteins known as "cancer/testis antigens," which are normally expressed in the germ line cells that give rise to sperm and eggs, but are also found in some cancer cells. Cancer researchers have been interested in these proteins as markers for cancer and as potential targets for therapeutic cancer vaccines.

"For very few of these do we understand the roles they might play in driving cancer," Partch said. "Understanding how PASD1 is regulating the circadian clock could open the door to developing new therapies. We could potentially find ways to disrupt it in those cancers in which it is expressed."

Beyond its role in cancer, Partch is also interested in understanding the normal role of PASD1 and why it is silencing the clock in the human germ line. The germ line is the only tissue in the body that researchers have found does not have circadian cycles.

A series of experiments in Partch's lab revealed how the protein interacts with the molecular machinery of the biological clock. There are four main clock genes, and the interactions of these genes and the proteins they encode create a feedback loop that drives molecular oscillations on a 24-hour cycle. Two proteins, CLOCK and BMAL1, form a complex that turns on the Period and Cryptochrome genes. The Period and Cryptochrome proteins then combine to turn off the genes for CLOCK and BMAL1. Partch and her colleagues found that PASD1 is structurally related to CLOCK and interferes with the function of the CLOCK-BMAL1 complex.

"It shuts the clock off very efficiently," Partch said.

The researchers also studied cancer cell lines that express PASD1 and showed that blocking the protein (using RNA interference techniques) turned the clock cycle back on in those cells. Partch's lab is continuing to investigate the biochemical mechanisms involved in the protein's interactions with the molecular clock.

"By understanding what makes the clock tick and how it is regulated, we may be able to identify points where we can intervene pharmacologically to treat disorders in which the clock is disrupted," she said.

In another recent paper from Partch's lab, researchers at UC Santa Cruz and the University of Memphis worked out important details of the interactions between two of the main clock proteins. They found that Cryptochrome interacts with a particular section of BMAL1, and that mutations causing structural changes in that section can alter the timing of the clock, resulting in cycles as short as 19 hours or as long as 26 hours.

"This study answers the longstanding question of how Cryptochrome works, and it's something we think we can drug. If we can control this process with small molecules, we can affect the timing of the clock," Partch said.

Several clock gene mutations have been identified in people with disorders that involve the timing of the biological clock, causing either advanced sleep syndrome or delayed sleep syndrome. There is also a growing body of evidence showing that environmental changes affecting circadian rhythms, including shift work and jet lag, can have profound effects on human physiology and health.

"There are vast consequences to trying to live outside the natural daily cycle," Partch said. "We know that clock disruption in general is not a good thing, and we have ongoing studies to explore its role in cancer and other human health problems."