Using Immunotherapy in Cancer Patients Prior to Surgery

Physicians could possibly use immunotherapy in cancer patients more effectively. More and more voices are in favor of giving this new treatment before the surgeon removes a tumor instead of afterwards. This could have huge advantages, like a better immune response against the tumor. On May 31st physician-scientist Christian Blank and his colleagues from the Netherlands Cancer Institute, among others, publish new results in the prestigious journal The Lancet Oncology.

With cancer immunotherapy oncologists have added a powerful new weapon to their arsenal of therapeutic strategies. Immunotherapies aim to unleash the patient's immune system against the tumor cells. This strategy works particularly well for some patients, but unfortunately not yet for a larger group. Predicting who will respond to which immunotherapy is a puzzle many people are trying to solve.

Oncologist and researcher Christian Blank from the Netherlands Cancer Institute focuses on a new approach: immunotherapy prior to surgery instead of after, as is currently the case (see illustration below). Such a neoadjuvant treatment could potentially have many advantages. "You can determine whether a patient responds to a certain drug, because you can see in the tumor material that is obtained during surgery whether the cancer cells have died", says Blank. "Also, the immune response induced by the immunotherapy is expected to be broader and therefore better. If the tumor is still present in the body, the immune system can learn to recognize the entire tumor with all its variations. The tumor may also be smaller and easier to remove after immunotherapy." 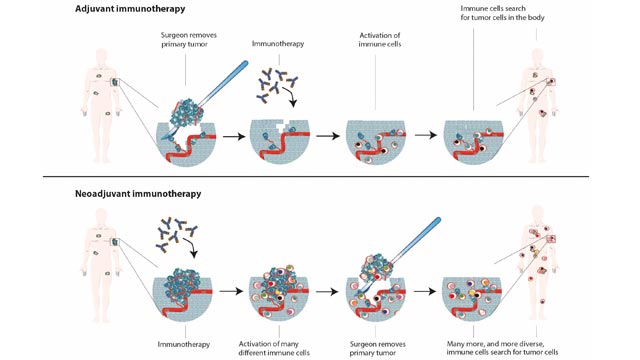 The Netherlands Cancer Institute investigates this treatment strategy in patient with different types of cancers: skin, intestine, breast, stomach, bladder, lung, renal cell, and head and neck cancer. Most advanced are the studies with melanoma patients. A first study that was concluded last year showed positive results but also severe side effects among the participating 20 melanoma patients with lymph node metastases (phase 1).

That’s why the researchers initiated a new study into the safety and efficacy of adjusted dosing schemes of immunotherapy prior to surgery. Together with colleagues in Sydney and Stockholm they compared three different treatment schedules with ipilimumab and nivolumab in 86 melanoma patients with lymph node metastases (this video explains how these checkpoint inhibitors work). Until recently, the standard treatment for patients at this stage of the disease was removal of the lymph nodes. These patients faced a poor prognosis: more than half of them die within 5 years after surgery because they often already have small invisible metastases elsewhere in the body.

Christian Blank and his colleagues have now published the results of the so-called OpACIN-neo study (phase 2) in the prestigious journal The Lancet Oncology. The treatment schedule that came out best caused way less severe side effects (20% of the patients) without the efficacy being reduced. Tumor reduction was seen in 23 of these 30 patients (77%), and in 17 of them all cancer cells in the tumor were destroyed (57%). “With this study we confirm that neo-adjuvant therapy is effective in many people, and we have now found a schedule with acceptable side effects”, says physician-scientist Lisette Rozeman, first author of the publication. After a follow-up of on average 8 months none of the patients who responded to either one of the three tested treatment schedules had relapsed (0 of 65). In 9 out of the 21 non-responders the disease did recur.

"The elegant aspect of the neoadjuvant approach is that the treatment result seems to be a good predictor for disease recurrence”, says Blank. We’ll have to wait and see whether this holds true for the long term. “In the future it might even be possible to leave out surgery in patients who respond very well. Our studies also indicate that we might be able predict whether a patient will respond to this drug combination based on a small number of biomarkers. We'll have to investigate this in a larger group though."

An extension study called PRADO (phase 2, see frame) is currently investigating the optimal treatment schedule of the OpACIN-neo study in 100 melanoma patients with lymph node metastases. After completion at the end of this year, a larger study will have to be set up to give a definitive answer as to which is better: immunotherapy prior or after surgery (phase 3). Since last November the standard treatment for these patients is one year of immunotherapy after surgery.

Together with two other large melanoma centers in Australia and the US, Blank has now set up an international consortium to streamline the clinical development of neoadjuvant cancer immunotherapies. "If all future studies share the same study design, identification of biomarkers to predict which combination treatment a patient is likely to respond to will become much more efficient. And personalized cancer immunotherapy may come within reach."

This article has been republished from the following materials. Note: material may have been edited for length and content. For further information, please contact the cited source
Related Topic Pages
ELISA
Immunoassays
The Immune System
Biomarkers
Anticancer Therapies
Cancer Immunology
Pharmacovigilance
Advertisement
Chosen for You
Industry Insight