What Happens in the Genomes of Cancer Cells After Radiotherapy?

Published: May 28, 2021
| Original story from The Jackson Laboratory
News

What Happens in the Genomes of Cancer Cells After Radiotherapy?

Complete the form below and we will email you a PDF version of "What Happens in the Genomes of Cancer Cells After Radiotherapy?"

Complete the form below to unlock access to this Audio Article: "What Happens in the Genomes of Cancer Cells After Radiotherapy?"

Ionizing radiation is used for treating nearly half of all cancer patients. Radiotherapy works by damaging the DNA of cancer cells, and cells sustaining so much DNA damage that they cannot sufficiently repair it will soon cease to replicate and die. It's an effective strategy overall, and radiotherapy is a common frontline cancer treatment option. Unfortunately, many cancers have subsets of cells that are able to survive initial radiotherapeutic regimens by developing mechanisms that are able to repair the DNA damage. This often results in resistance to further radiation as cancerous growth recurs. But until recently, little was known about exactly what happens in the genomes of cancer cells following radiotherapy. 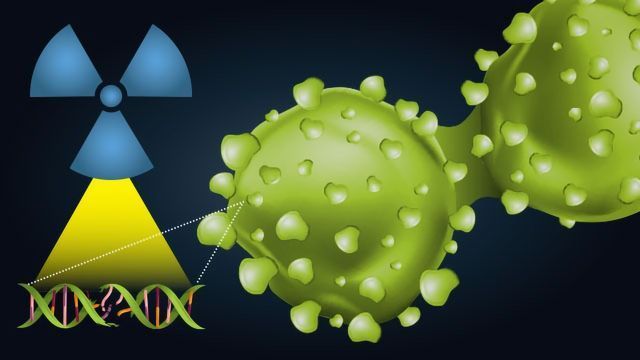 END_OF_DOCUMENT_TOKEN_TO_BE_REPLACED

To probe the traits of post-radiotherapy cancer genomics, Jackson Laboratory (JAX) Professor Roel Verhaak, Ph.D., led a team that analyzed gliomas, a brain cancer, both when they first arose and after they recurred in 190 patients. They also looked at data from nearly 3,700 other post-treatment metastatic tumors. In "Radiotherapy is associated with a deletion signature that contributes to poor outcomes in cancer patients," published in Nature Genetics, the researchers present findings showing that radiotherapy is associated with consistent genomic damage in the form of a large number of DNA deletions. The study also implicates an error-prone DNA damage repair mechanism as being an important contributor to the deletion signature. Targeting this DNA repair mechanism may help maximize the efficacy of radiotherapy. The study was co-led by Floris Barthel, M.D., a senior fellow in the group, and first author Emre Kocakavuk, M.D., a visiting student from University Hospital Essen in Germany.

Analyzing the pre- and post-treatment glioma datasets as well as the post-treatment metastatic tumor dataset, Verhaak and his team identified a significant increase of small (five to 15 base pair) deletions and chromosome or chromosome-arm level deletions in response to radiation. Furthermore, the post-treatment small deletion pattern had distinct characteristics that implicate canonical non-homologous end joining (c-NHEJ) as the preferred repair pathway for radiation-induced DNA damage.

"c-NHEJ is an error-prone mechanism for DNA repair that cancer cells need to use to mitigate the damage done by radiation. We discovered that small deletions commonly happen as a consequence," says Verhaak.

The research also reveals that patients who acquire the high small deletion burden have significantly shorter survival than others post-radiotherapy. The finding implies that the deletion signature is associated with a loss of sensitivity to subsequent radiotherapy and suggests that the presence of many small deletions may serve as a biomarker for radiotherapy response. Somewhat paradoxically, tumors that acquire the high deletion burden signature appear to become robust, possessing sufficient, if not precise, DNA repair to survive mutation-inducing treatments. Therefore, even if initial radiotherapy is effective, recurrent tumors that exhibit this genomic trait are unlikely to respond to more.

On the other hand, the study supports the hypothesis that DNA repair inhibitors likely represent an effective therapeutic strategy and could improve cancer cell response to radiotherapy. At this point, research has indeed indicated that drugs known as PARP inhibitors are effective for treating various cancer types, and preliminary work is being done to evaluate other candidate DNA repair mechanism inhibitors.

"Finding a robust signature of c-NHEJ in post-irradiated tumors is very exciting because it suggests that slowing this repair process during radiotherapy could potentially increase the effectiveness of treatment," says Barthel.