ANGLE plc announce a poster presentation by researchers from the Medical University of Vienna detailing the utility of its lead product, the Parsortix cell separation system, in the detection of ovarian and breast cancer. The poster will be presented at the American Association for Cancer Research Annual Meeting April 18-22. 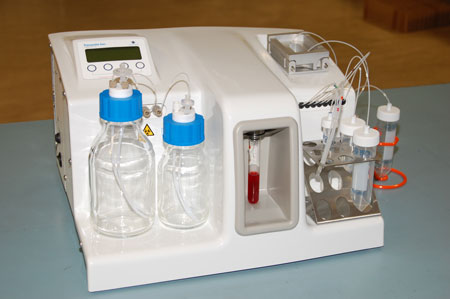 The research team, led by Prof. Robert Zeillinger, Head of the Molecular Oncology Group and Dr. Eva Obermayr, Principal Investigator, both from the Medical University of Vienna, sought to develop a protocol that combined the novel microfluidic Parsortix technology with qPCR to enable the molecular analysis of circulating tumor cells (CTCs) implicated in ovarian and breast cancer. In their research using this approach, Obermayr, Zeillinger et al achieved significantly higher ovarian cancer detection rates (80 percent and 78 percent, versus 24 percent for other CTC approaches) when screening against a proprietary 7-gene panel. For the detection of breast cancer, the researchers also demonstrated an improved detection rate – finding as high as 71 percent mRNA-positive patients versus 40 percent for the standard CTC diagnostic approach, which relies on the expression of epithelial markers.

Subsequently, the system was optimized with the addition of a further 23 RNA markers.  In the initial subset of study samples so far analyzed, this approach identified an increased level of 92% across all the cancer types with 100% of the ovarian cancer patients correctly identified while maintaining 100% specificity.  Larger sample sizes will be needed to confirm these optimized results.

“The Parsortix technology contributes to the unprecedented specificity of the overall approach, by providing a high purity CTC sample. Parsortix is a label-free technology, and as such may become the gold standard for ovarian cancer diagnosis,” said Obermayr.  “By combining the Parsortix technology with qPCR analysis, we achieved an unprecedented high detection rate of cancer, even in early stage patients, when conventional diagnostic methods failed.”

The Medical University of Vienna is now progressing into a multi-center prospective clinical study in ovarian cancer, which is expected to take around 18 months to complete.  ANGLE is supporting this effort as a top priority. The Parsortix system, together with the RNA marker panel, has the potential to help inform clinical decision-making for ovarian cancer patients in:

Following the early results of the ovarian cancer research from the Medical University of Vienna, the Company raised £8.8 million ($13.1 million USD) in February through a placing of additional shares and offer of new shares to existing stockholders. The money raised will be used to drive the commercialization of an ovarian cancer diagnostic on the Parsortix platform.

“The prospect of a simple blood test for cancer with high sensitivity and specificity is unheard of in the medical field,” said ANGLE Founder and Chief Executive, Andrew Newland. “The very strong substantiation of the Parsortix system coming so soon after our fundraising is very welcome. We continue to focus all our efforts to get this system into the market to the benefit of patients.”

While initial commercial development of the Parsortix system is focused on ovarian cancer, the technology is broadly applicable across all forms of solid tumor cancer – as well as other diseases – that require the capture and isolation of specific cells from a blood sample to aid in analysis for diagnosis. A second poster from researchers at Thomas Jefferson University that will also be presented at AACR reports on the capability of Parsortix system to aid in the effective isolation of single CTCs, allowing for downstream molecular analysis of a highly enriched population of single cells, irrespective of expression technique.

“It is now clear that the Parsortix system has wide application not just in ovarian cancer but in breast cancer and other gynecological cancers as well,” noted Zeillinger. “We are delighted to be working with ANGLE to bring this new capability to our patients as soon as possible.”

Benefits of Quality Control in the IVT RNA Workflow