3D printing techniques are now being used in medical research to establish more personalized treatment approaches and accelerate drug discovery. This technology is unlocking the potential of 3D cell culture approaches to better replicate the human body, gain a greater understanding of various cell types and, ultimately, develop patient- and organ-specific treatment pathways. This article takes a look at 3D bioprinting – what it is, how it is done – and explores the possible applications and benefits of plant-based bioinks.

The concept of bioprinting has been around for many years, since Robert J. Klebe used a standard office inkjet printer to deposit cells by cytoscribing in 1988.1 Fifteen years later, W. Cris Wilson and Thomas Boland at Clemson University launched the first inkjet bioprinter – an adaptation of a standard inkjet device – demonstrating its effectiveness by printing fluorescently-labeled human cells in culture media.2 The following year, Boland’s team succeeded in creating the first 3D bioprinter by loading cells into a commercial stereolithography printer,3 and interest in the application of 3D bioprinting has continually grown ever since.

3D bioprinting is essentially a form of additive manufacturing and takes advantage of the 3D printing technologies developed for other industries. The key difference is that, instead of using solid materials, 3D bioprinters are designed to print liquids or gels – bioinks – and have been adapted to work with living material. Bioprinters can be inkjet, extrusion-based or laser-assisted systems, and each printer type has its own benefits in terms of cost, cell viability, cell density and resolution. The compatibility with bioinks also varies, so it is important to ensure the bioprinter and bioink work well together.

What are bioinks made from?

Printing 3D tissues is very different from printing cells in 2D, requiring material that can retain the cells in different layers. Bioinks are natural or synthetic biomaterials that can be mixed with live cells and used as the base material for printing tissue-, organ- or bone-like structures. Comprised of biological components – to ensure the cells remain viable – and a structural component that maintains its rheological properties, they can be cell-laden, scaffold-free or cell-free. Selecting the most suitable bioink for each application is essential, as the composition and density of the ink can affect the cell viability and density. Bioinks must also be stable and sturdy, allowing them to be deposited in layers without disintegrating.

The development of affordable 3D bioprinters has allowed the technology to become more widely available, and there has been a huge increase in the number of publications citing the use of 3D bioprinting over the past few years, as researchers reassess biology that has traditionally been performed in 2D. Bioprinted 3D cell cultures provide a more biologically relevant representation of the body for in vitro studies compared to 2D investigations, leading to the development of disease, tumor and organ models, as well as organ-on-a-chip applications.

Researchers are also increasingly seeking alternatives to animal models, both voluntarily and in response to tightening regulations. Cellular behaviors and the effects of different drugs can be examined more accurately, while simultaneously reducing the need for animal testing. This is already benefitting areas such as cancer research, where tumor models can be printed to test treatment responses. Migration assays can also be performed to understand how tumor cells move and interact with other cells, and how benign cells become malignant.

In addition, 3D bioprinting opens up possibilities for novel patient- and organ-specific treatments, making personalized medicine more of a reality. Primary cells can be harvested and used to create patient-specific tumor models, which are then screened against different compounds to see which one gives the best response, for both drug discovery and to allow rapid initiation of tailored treatments. It’s a huge and exciting field where bioprinting can have an immediate impact. 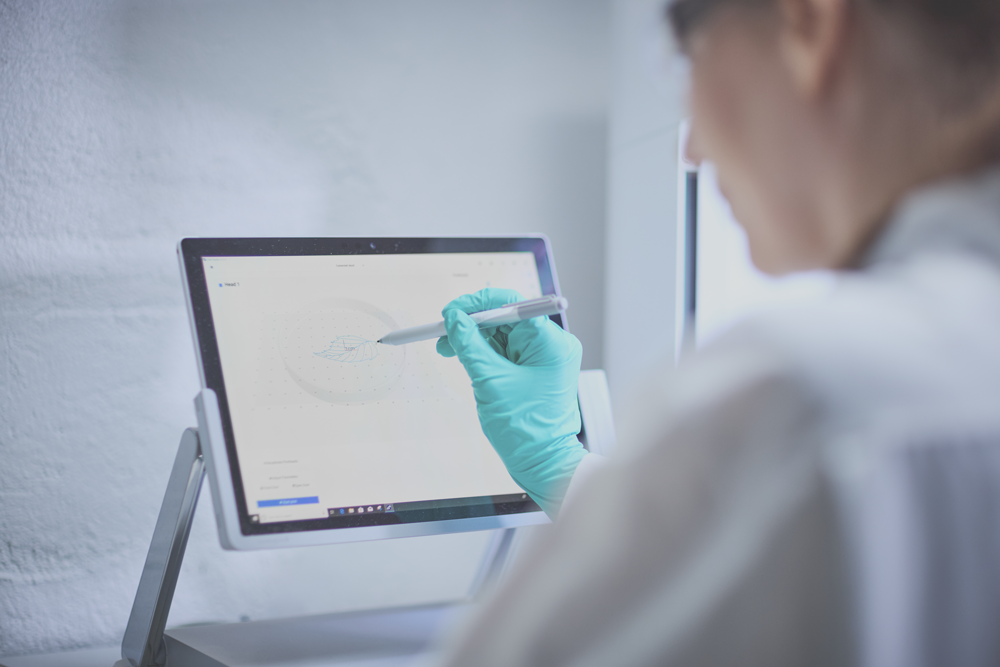 Bioinks using plant-based nanofibrillar cellulose hydrogels are proving a popular choice for these applications, mimicking the in vivo environment to support cell growth and differentiation. These bioinks can be used with or without crosslinking agents, and diluted to the required stiffnesses for a particular application, enabling 3D bioprinting with high precision cell positioning. Unlike animal-based gels, nanofibrillar cellulose hydrogels are also stable at room temperature, and do not suffer from batch-to-batch variations, for improved consistency and ease of use.

From in vitro to in vivo

More recently, scientists have been exploring the translation of this technology to a clinical setting, to print tissues or organs. Typically, specialized software is used to convert a medical image, such as an MRI or CT scan, into a three-dimensional computer model that acts as the instructions for the bioprinter, allowing generation of a model of the body part of interest that could, in theory, be transplanted into a patient. This requires careful selection of the most appropriate, host-compatible biomaterial and printing parameters, allowing sensitive live cells to be printed layer-by-layer, then cultured to generate three-dimensional models that imitate the behavior and structures of natural tissues.

Non-animal derived bioinks, such as a nanofibrillar cellulose hydrogels, are ideal for this application, as they do not interact with the body to cause an immune response – a prerequisite for any implant – making the prospect of human implant printing more viable. Similarly, there is now evidence that nanofibrillar cellulose hydrogels can be used throughout an entire protocol for the generation of stem cell therapies – from initial cell processing and differentiation, through to use as a cell carrier for injection – avoiding any matrix issues.4

The way of the future

Today, the top 20 pharmaceutical companies and many major academic institutions are using 3D bioprinters. From a drug discovery perspective, 3D bioprinting generates more physiologically relevant models, offering more effective predictions compared to commonly used animal models, which are increasingly frowned upon and legislated against. Better simulation of the body’s response to different compounds means that poor candidates should be eliminated from the development pipeline more rapidly, leaving the focus on those with the greatest likelihood of success. This will help to accelerate the speed of candidate selection while driving down costs.

The ultimate dream is organ printing – for example, a new pancreas for a diabetic patient – although this is still some way off. 3D bioprinting using the patient's own cells would reduce the likelihood of rejection and overcome the issue of donor shortages. However, implantation would need to be highly regulated, and have to be performed in a clinical setting using organs with proof of functionality, printed in a highly sterile environment. Automation has a key role to play in quality control here, and nanofibrillar cellulose hydrogels can help. These plant-derived materials are amenable to automation, can be used throughout the entire cell culture protocol, and can be reliably and reproducibly produced day to day, month to month, and year to year. Automation also opens up the possibility of establishing and validating an end-to-end protocol in one facility, and transferring it to another setting, perhaps even in another country. This will aid approval by the relevant regulatory authorities and, hopefully, enable faster adoption of novel therapies.

3D bioprinting has opened the floodgates for 3D cell culture, giving researchers an easy route to better representations of the human body compared to traditional 2D environments. This allows the investigation of more complex and sophisticated structures and modes of action, helping researchers to gain a better understanding of cell behaviors, which can then be applied to the development of novel drug therapies and personalized treatment regimes. In the longer term, “print your own” organ technology may also become a reality – a truly exciting prospect for researchers, clinicians and patients worldwide.