Cell culture contamination is a major concern for biological and biomedical research, as well as for biologics therapeutics production. Although some contaminants are relatively evident, such as bacterial overgrowth, some are far less apparent, e.g., chemicals, microbial mycoplasma or virus contaminants, and contamination by other cell lines. It is, therefore, imperative to follow best practices to prevent culture contamination and remain vigilant to identify it once it occurs. It is relatively straightforward to prevent chemical contamination, which is usually introduced from dirty laboratory ware or culturing reagents. Preventive steps include using disposable laboratory-grade plasticware or extensively washed, rinsed, and autoclaved reusable glassware, as well as laboratory-grade reagents and endotoxin-free sera. Bacterial and fungal contamination is mitigated by adding antibiotics and antimycotics to culture media and practicing sterile techniques in the laminar hood. Good sterile technique can also prevent cross-contamination of cell cultures with other cell lines.

Although good sterile practice can minimize mycoplasma and viral contamination, it is not fail safe and cultures should still get tested routinely. Moreover, sterile technique does not safeguard cell lines acquired from another laboratory, if they have already been contaminated, which is a common route of mycoplasma introduction into a laboratory. Indeed, mycoplasma reads were detected in 11% of 9,395 rodent and primate samples in one survey of the NCBI Sequence Read Archive. Newly acquired cell lines should automatically be tested for mycoplasma to prevent spread to established cultures. A similar problem arises for cell lines acquired from other laboratories, which may have been misidentified or cross-contaminated. Therefore, recently acquired cell lines must also be authenticated, especially if they were not obtained directly from a reputable repository.

Evidently, mycoplasma is a serious and potentially long-standing and widespread problem in both research and biopharmaceutical settings. “Mycoplasma contamination of cell cultures is a major concern for research purposes and the production of biologics,” explained Professor Eloit at the Pathogen Discovery Laboratory, Institut Pasteur. “Research using contaminated cultures can produce misleading or biased results because the mycoplasma can influence cellular characteristics, such as gene expression and metabolic dynamics, or induce malignant transformation. For biologics production, mycoplasma infection can inhibit cellular proliferation or induce death. It can also adversely influence the biological properties of cell cultures, which could impair their ability to express recombinant proteins, or impact their susceptibility to viral infections. From a safety perspective, mycoplasma may pose a health hazard in the biologics product.”

Unlike bacteria, mycoplasma do not possess a cell wall, which renders them resistant to antibacterial agents. “Unfortunately, antibiotic supplementation of culturing media does not necessarily prevent mycoplasma infection nor resolve a pre-existing infection,” Eloit discussed of this resilient microbe. “Therefore, it is essential to test for mycoplasma routinely, both in cell lines used for research and cultures employed for biologics production, such as of vaccines and antibodies. Even the final biologics product must be tested, according to regulatory requirements.”

Although there are existing mycoplasma detection methods, none are ideal and all suffer from certain drawbacks; thus, no testing method is considered a gold standard approach. “Mycoplasma are flexible because they lack cell walls, and, therefore, don’t adopt a standard shape. This makes them hard to spot visually by microscopy among the host cells. Staining with the DNA dye Hoechst renders the mycoplasma more visible by differentiation from the host nucleus, but this method in non-specific,” Eloit elaborated. “This leaves molecular techniques and culturing the mycoplasma itself followed by phenotypic characterization, which are preferable to microscopy. The problem with attempting to detect mycoplasma by culturing is that some species are not readily cultivable. Alternatively, mycoplasmas can be amplified in a specialized indicator cell line followed by nonspecific Hoechst DNA staining. Although these methods detect live mycoplasma specifically, they require specialized staff and are time consuming due to the culturing step. In contrast, PCR-based methods are sensitive, specific, and rapid; however, they do not distinguish live mycoplasmas from dead mycoplasmas or other sources of inert nucleic sequences present in reagents.”

Lacking a gold standard, Eloit is interested in developing improved methods for detecting mycoplasma, as well as other potentially harmful microorganisms and viruses. Recently, he and his team employed high-throughput sequencing (HTS) for ”one shot” detection of mycoplasma. “Importantly, our HTS approach combines the advantages of mycoplasma culture with PCR. Our method is specific, sensitive, and relatively fast, like PCR, but is also capable of differentiating nucleic acid from live mycoplasma versus from dead mycoplasma or exogenous inert nucleic acids like culturing. Our method accomplishes this by adding a modified nucleotide into the culture media. Only live mycoplasmas incorporate this modified nucleotide into their DNA, which we can detect by HTS.”

This novel method joins a growing class of diagnostics based on HTS. “We anticipate broader adoption of HTS for monitoring cell cultures moving forward,” Eloit envisions of the future. “These methods are agnostic and detect all known microbes and viruses, even those currently unknown. As regulatory authorities update guidelines, HTS will be useful for testing the safety of biologics produced from cell culture, such as vaccines. In a rapidly evolving situation, like the development of the COVID-19 vaccine, fast testing is essential. Beyond detection of microbial or viral contaminants, HTS stands to help characterize cell physiology and the impact of cell culture modifications for process optimization. Another application is the characterization of transgenic cell lines or viral vectors for gene therapy. We are just scratching the surface of what HTS can do!” 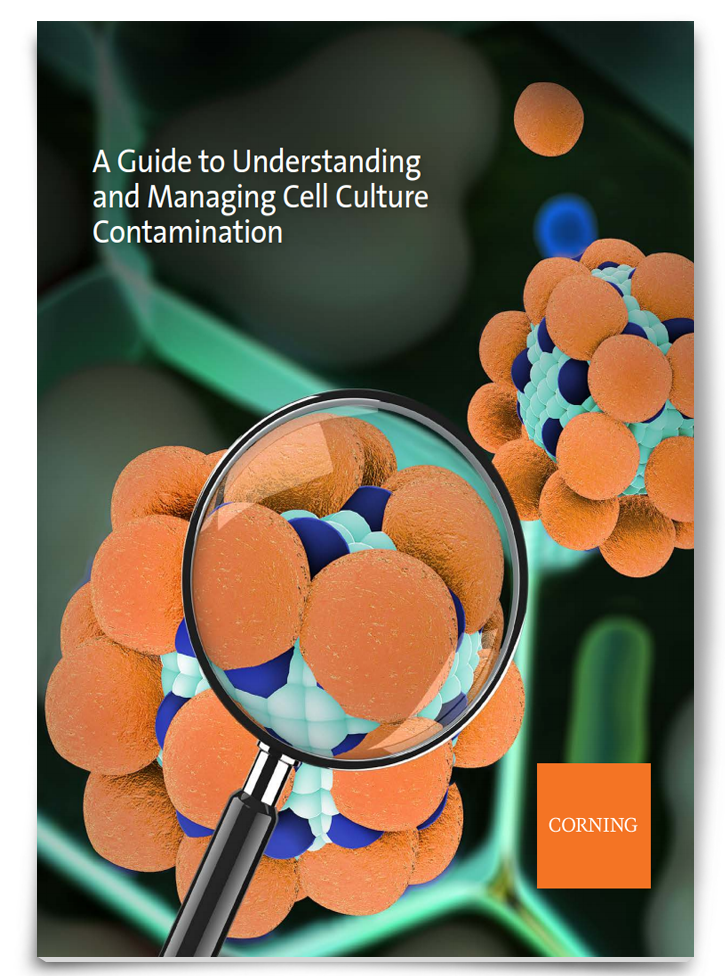 Culture contaminants may be biological or chemical, seen or unseen, destructive or seemingly benign, but in all cases, they adversely affect both the use of your cell cultures and the quality of your research. Although contamination cannot be totally eliminated, it can be managed to reduce both the frequency and the seriousness. Download this free guide that provides a review of cell culture contamination, the problems it causes, as well as hints and tips for controlling contamination in your work.

Problematic cell lines remain an issue in biological and biomedical research. These contentious lines arise from mislabeling or the accidental contamination of one cell line with a second, which eventually overruns the original line. Despite databases of known problematic contaminated or misidentified cell lines, e.g., Cellosaurus, they continue to be used in research, which can lead to irreproducible or uncertain results that are hard to replicate or interpret accurately. Dr Anita Bandrowski, at the Center for Research in Biological Systems, University of California, San Diego (UCSD) has long had an interest in boosting reproducibility in biological and biomedical research. Motivated by this interest, she co-created SciCrunch, run by the FAIR Data Informatics (FDI) Lab at UCSD. Their mission? To make data FAIR: Findable, Accessible, Interoperable, and Reusable.

“One data portal hosted on SciCrunch is the Research Resource Identifier, or RRID portal for short. I was one of the originators of RRIDs and I think that I am their biggest fan. These simple numeric identifiers are like social security numbers, but for research resources. They tell a reader which precise cell line or antibody authors used in their study. For science, this is step zero. Nailing down the list of ‘ingredients’ for the study,” explained Bandrowski. “What makes these simple numbers powerful is that journals are starting to require them and they link a resource, such as a cell line, to both archived and constantly updated information.”

Identifying problematic cell lines is very work intensive and time consuming. The International Cell Line Authentication Committee (ICLAC) was established for that purpose, and works hard to select the best evidence available to identify which cell lines are problematic. However, ICLAC places the information on a spreadsheet, so authors have to remember where it is and are supposed to check it regularly. “We all know that we are supposed to eat right and exercise, but we don’t always do that either,” Dr. Bandrowski explained. “Another problem is that researchers had been using names for cell lines, but with so many cell lines, it was hard to tell specifically which line a researcher was referring to. It’s sort of like asking what ‘Bill Smith’ is like. Which ‘Bill Smith’?” Bandrowski framed the problem. A solution arose through the collaboration of ICLAC with Cellosaurus, the authoritative source of RRIDs for cell lines. Cellosaurus assigned a RRID to each cell line, which would contain the full “social security record" for that cell line, i.e., all known characteristics and potential flags, which could be updated. “So now problematic cell lines were ‘called out’ in a searchable list on the Cellosaurus website,” Dr. Bandrowski exclaimed. “As journals started to require RRIDs, authors were confronted in a very immediate and direct way with critical information regarding the cell line used in their study, alerting them to any potential problem before manuscript submission. This demonstrates the power of persistent unique identifiers, like RRIDs,” Dr Bandrowski explained.

As reporting RRIDs in manuscripts has increasingly become a journal requirement, it is having tangible, positive effects, as recently reported in a paper by Bandrowski and her team. “We were interested in assessing the extent that problematic cell lines persist in research. When we reached out to journal editors, they confirmed that they struggled to keep the authors’ ‘feet to the fire’ for verifying whether a cell line they used was problematic, because it is very labor intensive. Then I looked at the scientific literature and found very good studies that estimated the percentage of papers using a contaminated or problematic cell line from reading a few hundred papers or those that estimated problematic cell use using PubMed searches. None of the studies were definitive. Cellosaurus and ICLAC confirmed that usage of problematic cell line continued,” Bandrowski recalled of the early events leading up to her paper.

“My student Zeljana got very excited and urged us to definitively quantify the scope of the problem. My colleague Dr Ozyurt was developing code to recognize cell lines. We were building a tool to help authors figure out which RRIDs to add to their manuscripts. At the insistence of Zeljana, we used this code on the entire biomedical literature from PubMed Central and ran the classifier code to detect all sentences where authors stated which cell lines they used. It was a difficult analysis, but what we discovered was really exciting. Yes, problematic cell lines were still used 8.6% of the time, based on 2 million surveyed papers. But we found that this number dropped to 3.3% when authors used RRIDs. So, RRIDs could be helping researchers steer clear of problematic lines,” she concluded with excitement. Her final advice to researchers seeking resources about problematic cell lines, “I think that the ICLAC group gives great guidance to scientists. They spend time on explaining exactly how to check cell line authenticity. I would differ slightly by adding: Please check your RRIDs before you start the experiment!”
Meet The Author

Masha Savelieff, PhD
More from this author >
Advertisement
Chosen for you
eBook